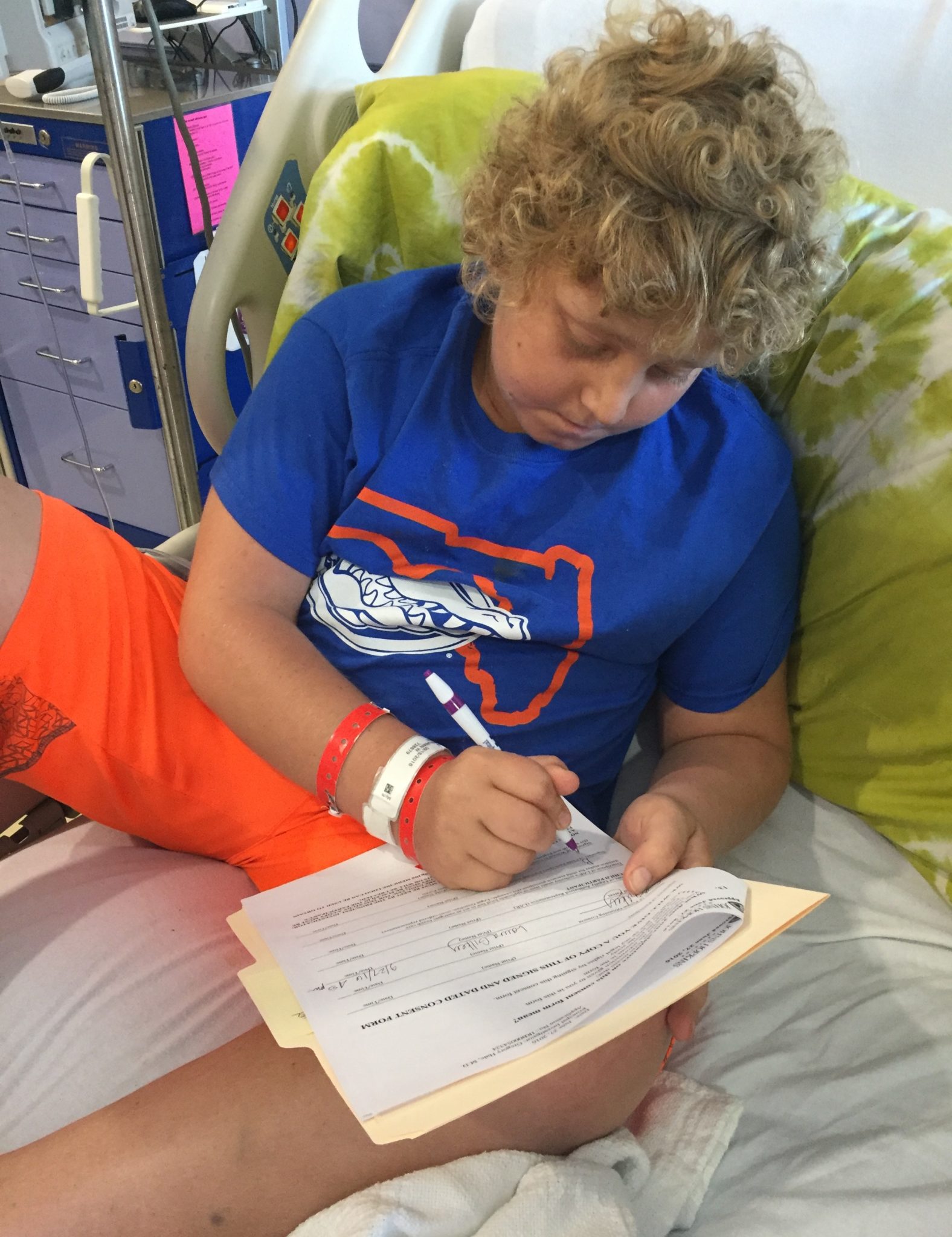 Benjamin wrapped up his first week of reinduction today. Other than Dexamethasone, he got a break from chemotherapeutic medicines–a day off, except for allopurinol, Zantac, calcium, fluids, baking soda rinses, blood draws and vital signs.

We used the day off to complete more schoolwork and communicate with Benji’s teachers about future lessons. Benji is caught up in science and nearly there in math. Language arts is next. I’m not worried about academics. I know that we will get done what needs to get done. Benji clearly understands third grade concepts and then some. He’ll be just fine.

There may not have been any chemotherapy in our little room today, but there was a lot of information. First, Benji’s bladder ultrasound came back clean–a nice exhale. Then, a GI doctor I’ve never met came in to review Benji’s surveillance plan with me, and used completely different language than I’d heard before to describe Benjamin’s polyps. He did use the word premalignant. He also said he’d follow up in six months, not three. I needed clarification so I found my favorite nurse practitioner and asked her to look up the pathology report. They are adenomous polyps. The word “premalignant” was not used. But polyps don’t just happen in an eight year old. I think both descriptions were accurate. If left alone, because of Benjamin’s CMMRD, the polyps would eventually become cancerous. Now, we devise a partnership between All Children’s, Dr. Tabori, and Moffitt to come up with a plan for eventual removal and a schedule that is safest for Benjamin.

The next bit of information came in with a member of the clinical research team. She asked Benjamin if he’d like to participate in a study, conducted by All Children’s, examining the levels of certain chemo medicines found in blood vs. saliva. She said the goal of the study was to ascertain whether dangerous levels of drugs could be detected in less invasive ways. She mentioned Methotrexate, and I couldn’t help wonder if Benjamin’s toxicity episode of last year contributed to this study. Benji and I both signed the consent form without hesitation. (It didn’t hurt that the researcher offered Benji a gift card for participating.)

The most information came in today with the return of Dr. Oshrine. I was so happy to see him I gave him a hug, but I kept my emotions in check. He visited Benji, who was also clearly happy to see his favorite doctor. Then Dr. Oshrine asked Benji if he could speak to me alone. We stepped outside and sat in the chairs near the window in the hall just outside Benji’s room.

First Dr. Oshrine extended to me the compassion and genuine concern that Michael and I have come to expect from him. Then he started breaking down the clinical aspects of Benji’s relapse, his genetic predisposition, and his treatment plan. He definitely wants us to stay inpatient for the full month of Benji’s reinduction. He also said we may do two rounds of immunotherapy before moving to bone marrow transplant. He talked about the donor process and the merits of siblings vs. parents vs. unrelated matches, careful to encourage a one step at a time approach, and not get us too ahead of ourselves.

Dr. Oshrine also talked about Benjamin’s risk factors specific to leukemia, including the Ikaros gene deletion discovered way back in the first month after his initial diagnosis. This deletion, combined with the presence of minimal residual disease after induction, is what bumped Benji into the “Very High Risk” category. Dr. Oshrine said that he’d like to add a new chemotherapeutic medicine to Benjamin’s reinduction phase, driven solely by this genetic factor. It’s called Dasatanib. It’s more commonly used in Chronic Myeloid Leukemia, or in Acute Lymphoblastic Leukemia with the Philadelphia chromosome, which expresses similarly to the Ikaros deletion in Pre-B Cell ALL. Dr. Oshrine explained why he felt this medicine, taken orally, will offer Benjamin an added measure of success as he prepares for transplant, and in the months following. I asked for printed information on the drug, but I found myself nodding along with his explanation. No one else has mentioned this option, and it made me feel hopeful. Our doctor has clearly been thinking progressively about the things that make Benjamin unique.

Michael came up to the seventh floor after work, and I took another lap around the bay, thinking about all I’d heard today. I came back to a happy boy snuggled up with his daddy. Kathy and Gana brought Banyan to us a little later, with yet another delicious meal. I didn’t want to let Banyan go when I saw him.

Tomorrow is a big day. Benjamin will receive a platelet transfusion in a few hours to prepare him for his afternoon lumbar puncture with intrathecal Methotrexate. He’ll start the new medicine Dasatanib. He’ll continue his steroids. He’ll have Vincristine and Daunorubicin, the latter of which will be preceded by the heart protectant Dexrazoxane. He’ll also get his third round of Erwinia shots. I asked him if he wanted me to find out if he could have the shots done while he was under anesthesia. He said no way. Despite the pain of the shots, he doesn’t want to have them done without his control. What a kid, I swear.

Benjamin’s roadmap is getting so individualized now that a pharmacist is coming in tomorrow morning to be sure everything is properly coordinated. I’m grateful for this. There are so many factors at play here. Fear has so many doors now that I have stopped trying to shut them all. It comes in, I sit with it, and send it on its way, making room for love and gratitude. They are much more capable healers.