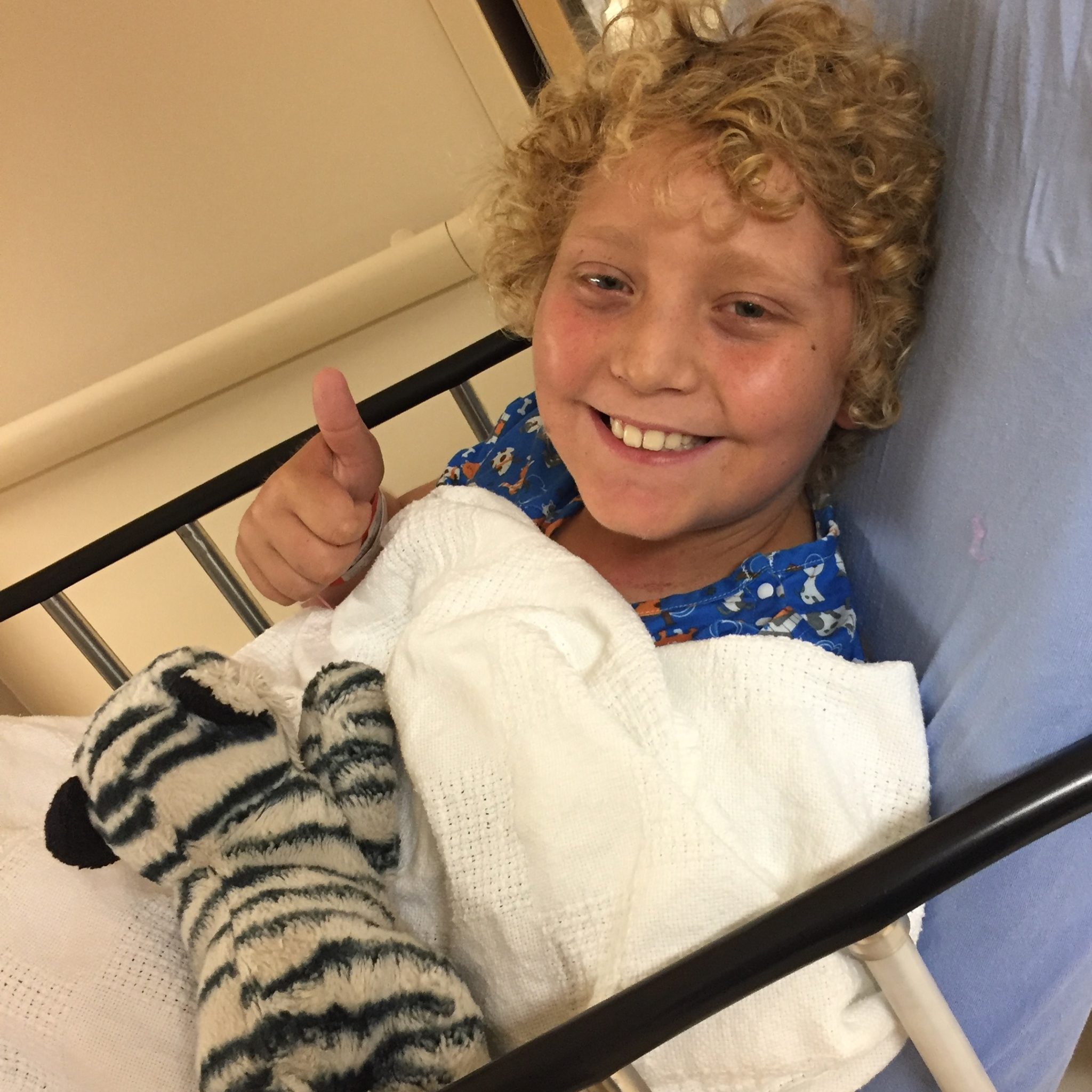 Benjamin slept soundly. He received a platelet transfusion in the night, and another one when he woke up, elevating his platelet level to 47,000–just below the threshold required for his colonoscopy and endoscopy. The team was satisfied with this number, so we moved forward. Day One.

Michael and Banyan arrived just before the doctors made their rounds. Our boys were so happy to see each other. They played indoor basketball and shot NERF guns while we spoke to Shari and Dr. Grana. Michael was able to run down to genetics and get the paperwork we needed to move forward with Banyan’s CMMRD testing, and combine it with the blood test for the bone marrow donation.

Shari and Dr. Grana still hadn’t seen the results of yesterday’s PET scan, so we had little to discuss. I did do a bit of research on Benjamin’s new roadmap, and asked the moms’ group about their experience with Daunorubicin versus Doxorubicin. They are both anthracyclines, but Daunorubicin is apparently more cardiotoxic. Several moms had been offered Dexrazoxane for their children. It can protect the heart from anthracycline induced cardiotoxicity. We asked Dr. Grana about it and she said that while they don’t routinely give the medicine, they do use it for kids who are scheduled to get higher doses of anthracyclines and/or radiation. She said there is no toxicity associated with the protectant; basically there is no reason not to do it. If we can protect Benji’s heart in a nontoxic way, it seems like a measure we should take. We added it to his orders to precede Daunorubicin, which he’ll get weekly, along with Vincristine, for four weeks.

Our stay so far has included many reunions with nurses, technicians and custodians we love. Today’s visit to Special Procedures was no exception. Benji’s team surrounded him with laughter, and he returned the favor. He was bright and sparkly right until the moment the milky propofol put him to sleep, and I kissed him and wished him sweet dreams.

Our plan was for Michael, Banyan and I to get our blood tests done while Benjamin was sedated. But our pager went off much sooner than we expected, while we were still registering for the lab work. We were told that the gastroenterologist found three small polyps during Benjamin’s colonoscopy, and she needed our consent to remove what she could.

We signed the consent, then waited in a consult room for the GI doctor for what seemed like forever. I recognized the recently familiar feeling of being punched in the gut. Finally Dr. Rook came into the tiny room. She said the polyps couldn’t be removed entirely because of the way they were attached to Benji’s colon, but she took what she could, and sent biopsies to pathology (as well as to Dr. Tabori in Toronto). She said they looked benign to her, but she can’t be sure–and with the CMMRD diagnosis looming over everything, we can’t be too careful.

I wanted to hear a perfectly noneventful colonoscopy report, of course. This introduces yet another new element of fear. But I’m so grateful we moved forward with the scopes. If the polyps are benign, we will monitor them again in about three months, or when Benji’s immune system is ready for the procedure. If they are malignant, I assume they will be surgically removed as soon as possible.

While Benji was still under sedation for his lumbar puncture (and with it the intrathecal Cytarabine that officially began his reinduction), Michael and Banyan went to the lab to get their blood tested for bone marrow donation. I stayed behind and waited by the door to the Special Procedures Unit with the pager in my hand. It seemed to take much, much longer than usual. One of our favorite transport technicians walked past me. We haven’t seen her in a year or more. She said with a smile, “Back again?” I nodded. That woman saw me. She looked into my soul. “God is with you, baby. You are a strong woman.” She left me in tears.

Michael and Banyan came back just as the SPU pager went off. Benjamin was super sleepy and difficult to wake up. We learned that the anesthesiologist needed to use Fentanyl in addition to his regular Propofol in order for the GI doctor to try and remove Benjamin’s polyps. His vital signs were all stable though; last time he had Fentanyl, he needed oxygen for hours. That was not the case today. He finally woke up with his wonderful sense of humor, and we all went upstairs.

Once Benjamin was comfortably settled, I left him with Michael and Banyan and went to get my own blood test. While I was gone, Shari delivered the results of the PET scan to Michael. Aside from a slightly enlarged lymph node and spleen–both typical of leukemia patients–the scan was free and clear of hypermetabolic activity, which is excellent news.

Dr. Grana also came to see Michael while I was in the lab. She tried to reassure him about the polyps, saying she was not concerned. It’s hard to share her sentiments when the CMMRD diagnosis is so closely linked to colorectal cancers.  All we can do is wait for the results, and live in the moment until they arrive.

A school liaison visited today as well, and offered her services in keeping Benjamin up to speed. Now that we have an idea of how much school Benjamin will actually miss, it’s time to start figuring out a schedule that will work with his treatment, and not get him too far behind.

Michael brought Benjamin one of his favorite meals, which he enjoyed thoroughly after so many hours without food. He is snuggled into bed now, sparkly as ever. He’s had two doses of Dexamethasone and an antiemetic. His night nurses have donned their blue haz-mat suits and gloves, and they have hung his bag of Vincristine. When it finishes its drip, he’ll have the protective Dexrazoxane, and then the bright red Daunorubicin, which, after a few weeks, may mean the end of his sweet curls. Time will tell.

One day at a time is the only acceptable modus operandi right now. This one felt like a very long day. I’m grateful Benjamin’s treatment has begun. Fear continues to threaten, but gratitude is stronger. I’m grateful for so many things tonight.