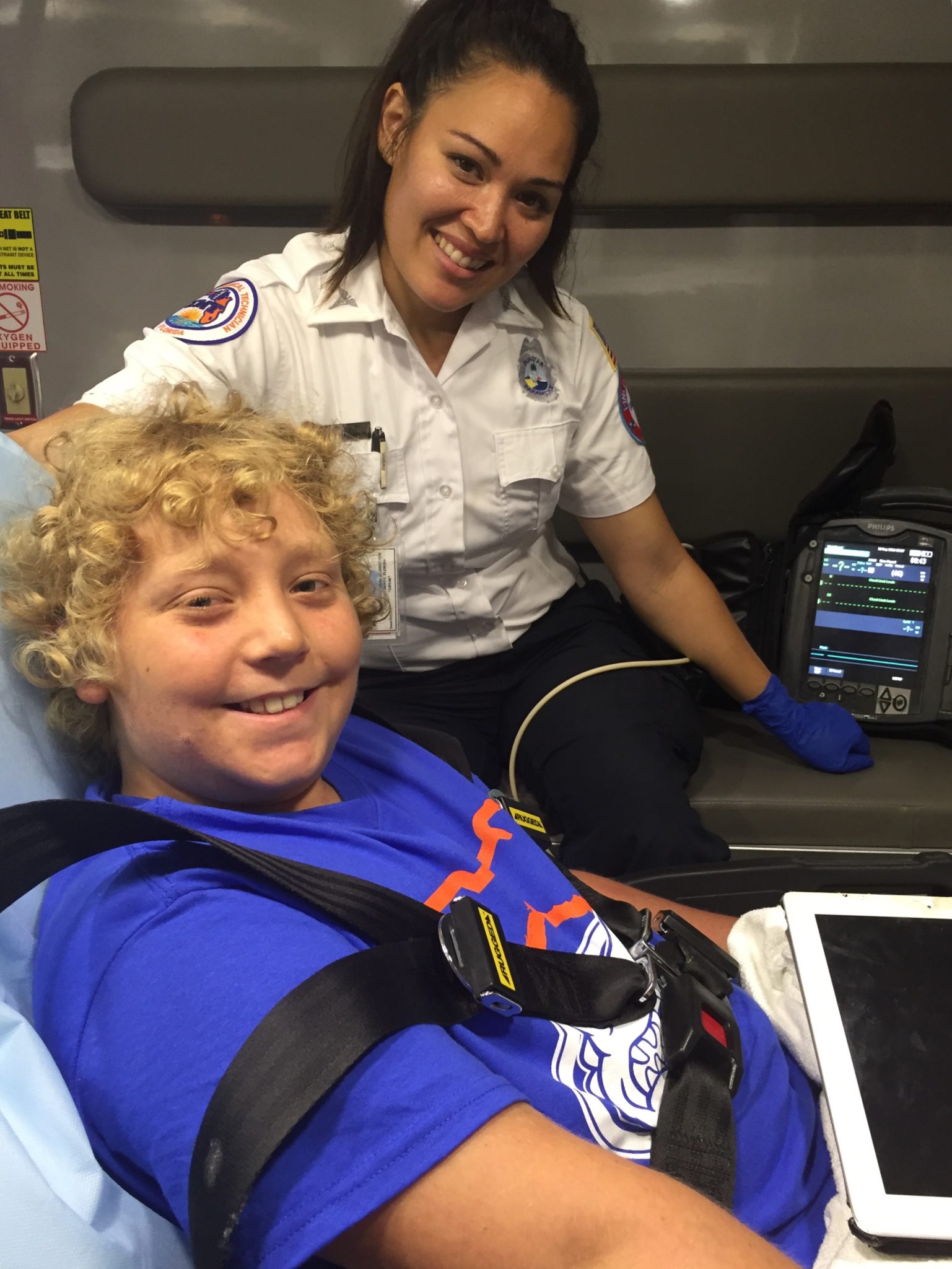 I expected a big challenge today. Instead, Benjamin totally rose to the occasion. He has been an absolute joy, even with no food and a totally empty gastrointestinal tract, all day long.

Benjamin’s platelets reached an all time low of 2,000 this morning. Our daytime nurse rushed to get him a transfusion before the ambulance arrived to take him to his PET scan. He will have at least one more transfusion before his scopes tomorrow. I’m so grateful for everyone who is willing and able to donate blood.

The paramedics came next with a very cool stretcher for Benji and wheeled him downstairs, into a real live ambulance. They were super kind and showed us where all of their emergency equipment was located. We took a short ride, and the ambulance came to a stop. We were escorted into a diagnostic radiology center in the most unlikely of places–right between two downtown bars. All Children’s does have a mobile PET scan machine, but it’s only available every other Tuesday. We didn’t want to wait. Now that our hospital has the Johns Hopkins name, I hope a permanent PET scan machine can be added to the facility–but I’m grateful my boy had a cool ambulance ride in the meantime.

Benjamin’s port was injected with radioactive glucose, and we sat in a small room and waited 45 minutes for the stuff to work its way through his body. Then we went to another room, where the machine was waiting to scan Benji’s body. The whole test, from stem to stern, took about an hour. He did such a great job being still. He actually caught a bit of a nap.

While I sat beside the scanner and watched Benji’s body move slowly in and out of the tube, I found myself faced with an unexpected emotional release. Even though I know what is happening in Benji’s blood and marrow, the idea of a machine scanning for additional “activity” caught up with me. I’m grateful I was outside of Benji’s vision, and could allow the fear to come and go peacefully.

Once we were back on the seventh floor, Benjamin began the preparation for tomorrow’s colonoscopy and endoscopy, which continued until just a few minutes ago.

Dr. Grana and Shari, our ARNP, came in this afternoon to discuss the roadmap for Benjamin’s reinduction, and give us a clearer picture of how the next few months will go. We will begin chemotherapy tomorrow afternoon, after Benji’s scopes and lumbar puncture in the morning. It will be Day 629, but it will also be Day 1, all over again.

After Benjamin achieves remission, we will be back on 7 South for a 28 day round of immunotherapy. I got my first literature on this approach today and can begin learning more. Following those 28 days, assuming we have a donor, Benjamin will receive a bone marrow transplant, and we will be inpatient again for six to eight weeks.

As for the marrow donor, we got some clarity there as well. If Banyan is a match, he would be Benjamin’s best possible choice. We decided to expedite his testing and let him miss school tomorrow. He’ll have the CMMRD genetic testing done at the same time, and Michael and I will have our marrow typed as well.

Michael came to see us again this afternoon, and Kathy and Gana picked Banyan up from school and joined us in the evening. They played a round of UNO, and Benji loved the company. Before they left, Michael and I were able to have a conversation with the boys and explain the process of the bone marrow transplant, the length of our upcoming hospital stays, and why Banyan might be the best option to be Benji’s donor.

Both boys handled all of this new and wild information so beautifully. Banyan asked appropriate questions and wondered what it would feel like. We told him that step one was coming to the hospital tomorrow to have his blood drawn. It will be analyzed to see if a sibling match is possible. Then we explained the ways donation happens, to the best of our knowledge. Banyan said he didn’t know if he could be as brave as Benji, but he’d like to try. He wants to be a match. We told him he is absolutely brave enough. He’s just never had to use his bravery quite like Benji has. We will take this step by step; I don’t want to put too much weight on this test yet. If Banyan isn’t a match, I don’t want him to feel like he has let anyone down. That’s not the way this works, of course.

Benjamin also took this new information in perfect stride. He didn’t complain a bit when he contemplated the span of time we will be inpatient over the coming months. His spirit would not be dampened today.

We are so much stronger together. I am so proud of my little family.