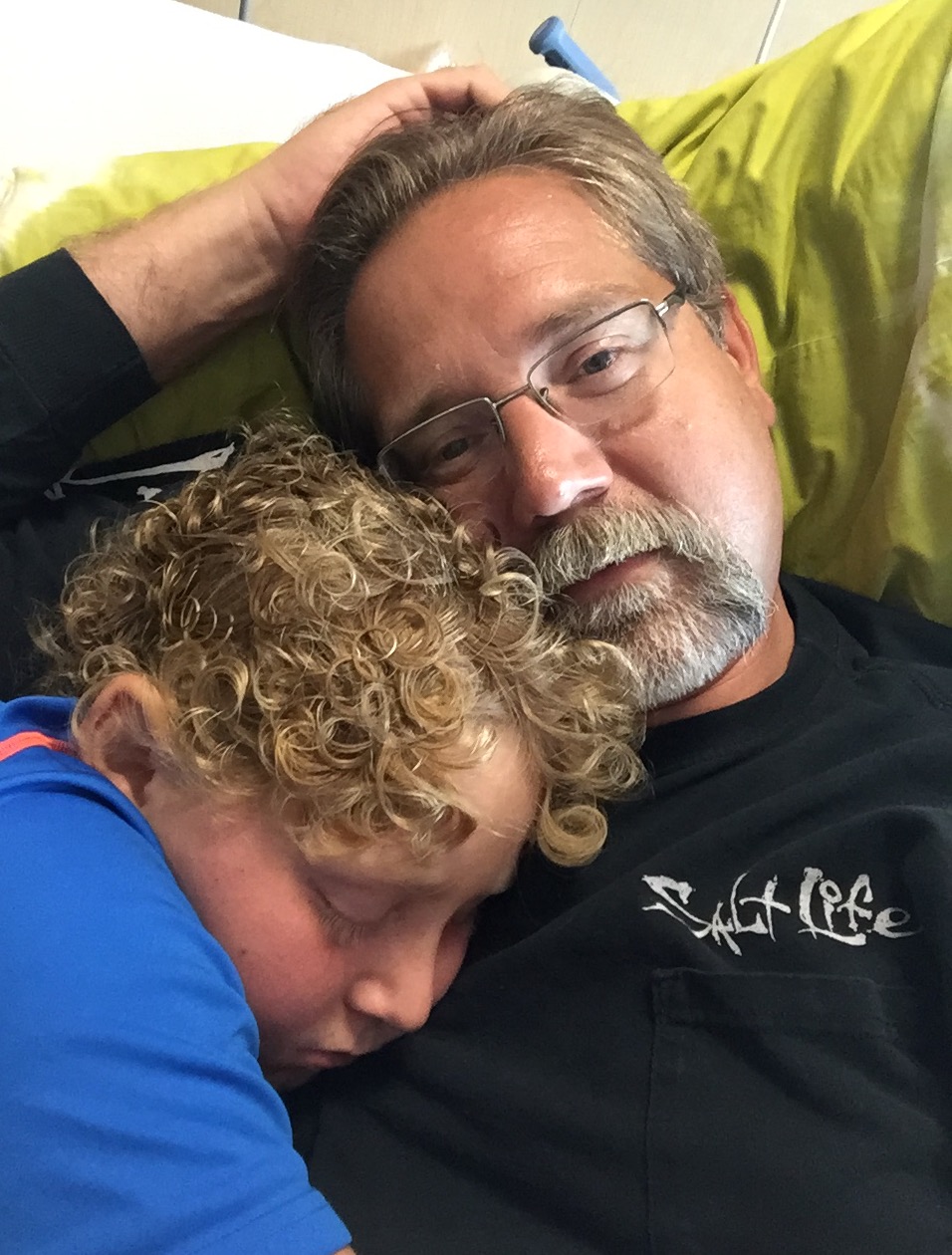 Benjamin and I enjoyed a much more relaxing day today. He slept well; I did not, because a floating nurse from PICU kept trying to give Benjamin oxygen. I assured her he didn’t need it. He was sleeping deeply, and I knew those tubes would do more harm than good to his rest. I asked the nurses to monitor his saturation levels and if he dipped below 90%, I’d agree to the tubes. I wouldn’t need to. He repositioned himself within minutes and his oxygen jumped back up to 96-97%.

Benjamin’s polyp biopsies aren’t back from pathology yet. The only news of the day–and it’s great news–is that the leukemia has not infiltrated Benjamin’s central nervous system. This means his roadmap for this first reinduction phase will include just two more lumbar punctures, rather than intrathecal chemotherapy weekly or even twice weekly. Leukemia has not crossed the blood brain barrier.

The effects of Benji’s Dexamethasone have begun. This steroid affects him more intensely than Prednisone. He’ll have two doses a day for two weeks. His cheeks are already flushed and hot, he is puffy, and he has had a few moments of sharpness today (but only a few–his sweetness prevails). He is also a little more tired than usual, but that could be a result of all his body went through yesterday.

The hunger that comes with Dexamethasone is also beginning. For lunch Benjamin only had one thing on the brain, and it was a sandwich I didn’t have handy, nor did the All Children’s cafeteria. A sweet local friend dropped what she was doing to procure it for him. So many people have offered so many things to make us more comfortable. Sometimes I’m able to accept the offers and sometimes I’m not, but we appreciate every kind thought and word we’ve been given this week. It’s an honor to be held in love by so many.

Michael brings a kind of peace and joy to Benjamin that no one else can. His arrival this afternoon made Benji so happy. They played for a while, we styled Benji’s  gorgeous curls, then Benji slept in his daddy’s arms. The sense of calm in the room was beautiful.

Kathy and Gana brought our sweet Banyan to us later, along with with some provisions we needed and a delicious Vietnamese meal. We had a lovely visit. Banyan is adjusting to his new normal (again). He’s doing a wonderful job and voices his feelings when he needs to. I wish these were not the circumstances in which he has to mature, but he does, and he wears his new responsibility well.

Benji was super tired when everyone left. He took a warm bath with Epsom salts and fell asleep almost immediately. Before he slept, he asked when he would get his first round of Erwinia shots Saturday. Thinking of those needles in his legs is the only part of this relapse so far that sends him into a sort of resigned sadness. He said, “I’ve had bad luck with that kind of stuff lately. Accessing, my back hurting after the sleepy medicine…I just have a feeling something will go wrong.”  I told him we should honor that feeling. We can speak to the nurses about it and prepare for the shots as best we can. We will use numbing cream, his meditation trick, and circulation after the medicine enters his body.

I hate that he has to go through the shots again. But he will realize, once again, how much stronger he is than the pain.