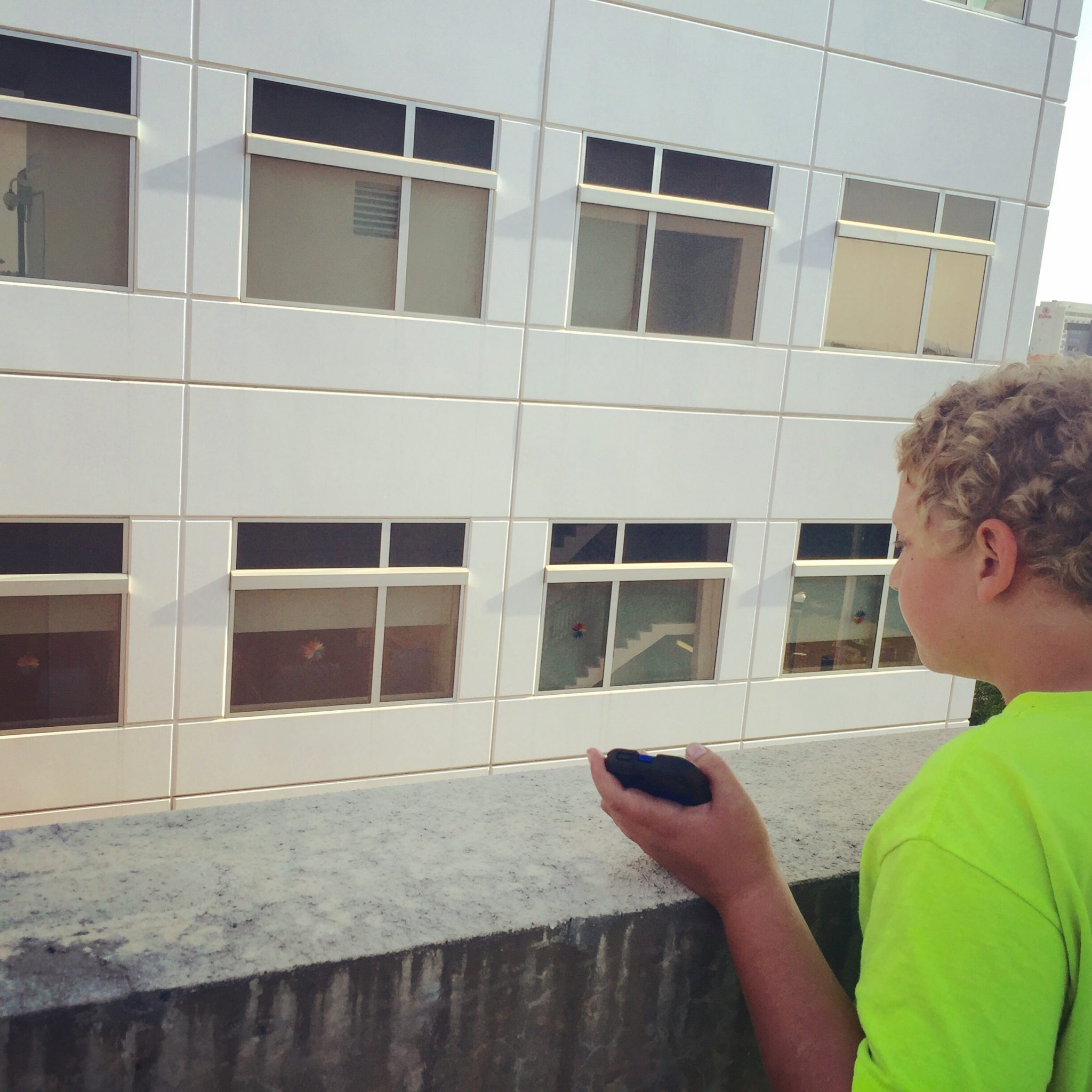 Benjamin began his third cycle of long term maintenance today. He woke up calmly and contently. He did not complain when he couldn’t eat breakfast. He did not complain when I placed numbing cream and dressing on his port site. He sat quietly in the car, resolute. His silence concerned me a little, but I bit my tongue and honored his process. I admire his resolve and his lack of drama; I am constantly in awe, knowing I could not possibly sit in such still determination.

We parked in our usual spot on the top floor of the parking garage. As we were walking to the elevator, we faced the windows on the building, and on every one of the third floor panes was a rainbow star. Benji pointed out that some of the rooms were occupied. The smile on his face when he put the occupants and stars together was beyond gratifying.

I was happy to see one of our favorite clinic nurses in our exam room today. She never needs reminding that Benji likes freshly drawn saline, or wants to draw his own blood. She knows that he likes to remove his own dressing and can’t stand adhesive remover. And she never counts to three. She gets him completely.

Benji didn’t stall before his port was accessed. He just carried out his rituals: he asked for a pair of gloves, carefully put on each one, removed his dressing, wiped off the numbing cream, balled up the gauze in the inside-out removed glove and threw the whole ball of waste into the garbage can, three point style. He put on his mask, closed his eyes, squeezed my hand and went inward. His port was accessed, and as always, I gave thanks for immediate blood return. Thanks for that little piece of equipment that has served him perfectly for over fifteen months.

Benji’s blood was sent to the lab and our nurse asked us the usual questions about medication, symptoms, pooping, leg pain, etc. We answered. Then we waited. And waited. Luckily there was a Will Ferrell movie on TV that neither of us had seen, and it helped pass the time beautifully. Dr. Grana came in a little while later with the lab results in her hand. I found myself happy to see her. She gushed over Benji’s curls. Everyone gushes over Benji’s sweet curls.

The lab results were excellent in most areas, and just a little bit high in others. Benji’s bilirubin and liver enzymes were slightly elevated, which is to be expected. After this upcoming week of steroids I plan to increase his milk thistle intake. The most significant lab result was his absolute neutrophil count (ANC), which was still weighing in a little heavy for the oncologists’ liking at 1650. They want the blood cells suppressed, but not profoundly so. Their ideal range is 500-1500.

Dr. Oshrine increased Benji’s 6MP last month, so Dr. Grana left that dosage alone, but she increased his oral Methotrexate and Prednisone, bringing all three dosages to 125% strength. The new regimen started tonight. It’s a lot of medicine; when I filled the pill box for the week, it contained 83 tablets. That doesn’t include supplements or the rescue drug Leucovorin that we will administer twice on Thursday. Because of the increase, we’ll need to return to clinic in two weeks to check counts and make sure they don’t drop too low. I’ll be increasingly cautious with exposure to potential viral and bacterial threats in the meantime.

Dr. Grana asked us many questions. She was so pleased to hear how well Benjamin was doing in school. She explained that cognitive delays were more common in younger children, and was satisfied that Benjamin is not among her patients with learning difficulties. She left happy, and we waited for the pharmacy to bring Benji’s intravenous chemo up to clinic. We watched more Will Ferrell and engaged in fierce staring contests. Michael arrived just before Benji’s Vincristine did, with perfect timing and two hot coffees. We were both thrilled to see him. Benji was offered an anti-emetic before the Vincristine and lumbar puncture, but he refused, and we honored his decision. Turns out his instincts were right on. He wouldn’t need it.

The Vincristine didn’t bother Benjamin a bit, nor did the heparin to lock his line while we walked down to surgery. He has made such major progress. He didn’t even use his essential oils today. Just his Jedi mind control. While we were leaving the clinic, I saw a mother in the intake room with a giant bag over her shoulder and tears in her eyes. I knew the child she was with was newly diagnosed; I could see it all over her body. I wanted to wrap my arms around her.

Michael is such a great companion on lumbar puncture days (and all of the other days too). He made sure Benji got two bouncy balls from the trinket machine before going to the waiting room in surgery, so that they could play their game of trash-ket-ball. We were called back to pre-op rather quickly. The wait was easy.

Dr. Oshrine was in procedures today, which meant he would be doing Benjamin’s lumbar puncture and administering his spinal chemotherapy. This was a relief for all of us. As soon as we saw him, he and Benji were gently joking with each other. Benji said, “Hi, my friend!” and Dr. Oshrine said, “Hi, Golden Delicious!” Golden Delicious is Banyan’s nickname for Benji these days, because of his gold-and-delicious hair. Word travels fast on the oncology ward.

I held Benji’s hand and stroked his hair as he watched the milky white propofol enter his tube. He was so calm. The nurse anesthetist asked him what he was going to dream about, and he said, “Bacon and potatoes,” knowing he’d get a laugh. He went to sleep easily. I thanked the nurses, the anesthesiologist, and Dr. Oshrine. I turned around at the doorway and watched the team swarm my boy as his breathing fell and their signal to operate was clear. Walking away from that sight never gets easier, even with the confidence of our favorite oncologist at the helm. It is an act of pure faith, and of letting go.

Michael was there to catch me through the double doors. We had a list of tasks to accomplish during Benji’s procedure and we barely completed them. We went up to my car and collected the giant bin of donated toys to deliver to All Children’s. We deposited them in the donation box, then he returned the bin while I went to the pharmacy and filled six prescriptions. We met in the cafeteria where we fulfilled Benji’s snack requests. The buzzer to call us back up to surgery went off while we were checking out. Just in time.

Benji was slow to wake up when we arrived in the PACU, and we were grateful. Michael and I feel relieved when he lies flat for an extended period of time after lumbar punctures. He has never had a spinal headache and we’d like to avoid one if possible. Gravity works in his favor for this. When he did wake, he was calm and happy. He opened his eyes, looked right at me, and said, “I’m ready to go home. Can we get a wheelchair?”

We learned Benji had only been given 200mg of propofol, his smallest dose yet. We got the “hour zero” of his lumbar puncture so we know when to administer Leucovorin on Thursday. We collected our things, signed our paperwork and left the surgery unit. It will be 84 days until we return to the unit; our longest time away since diagnosis. That’s just fine with all of us.

Benji’s recovery at home was perfect. He had considered joining his little league team tonight as a spectator, but he said his brain felt a little funny and he thought he should lie down. Michael and I told him we thought that was a wise decision. We set him up in bed, and I went to retrieve Banyan from the bus stop. Banyan was so thoughtful and asked right away how his brother was doing. His first thought and action upon arriving home was to reunite with Benji and make him happy. The kid has such a gigantic heart.

After dinner and Banyan’s basketball practice, we all snuggled in and watched our Tampa Bay Rays get a much needed win. Benji went to sleep easily. He didn’t complain about his increased medicine dosage and he had no discomfort or pain. This is a good sign. I would not be surprised if he goes to school tomorrow, though he can certainly take the day off if he needs to. He started a new steroid pulse tonight and we will react accordingly, with frequent snacks and increased potassium. Tonight, this is all feeling manageable. I realize we are only in our third cycle of maintenance. We have a long way to go. But tonight, I feel like we are kind of nailing it.