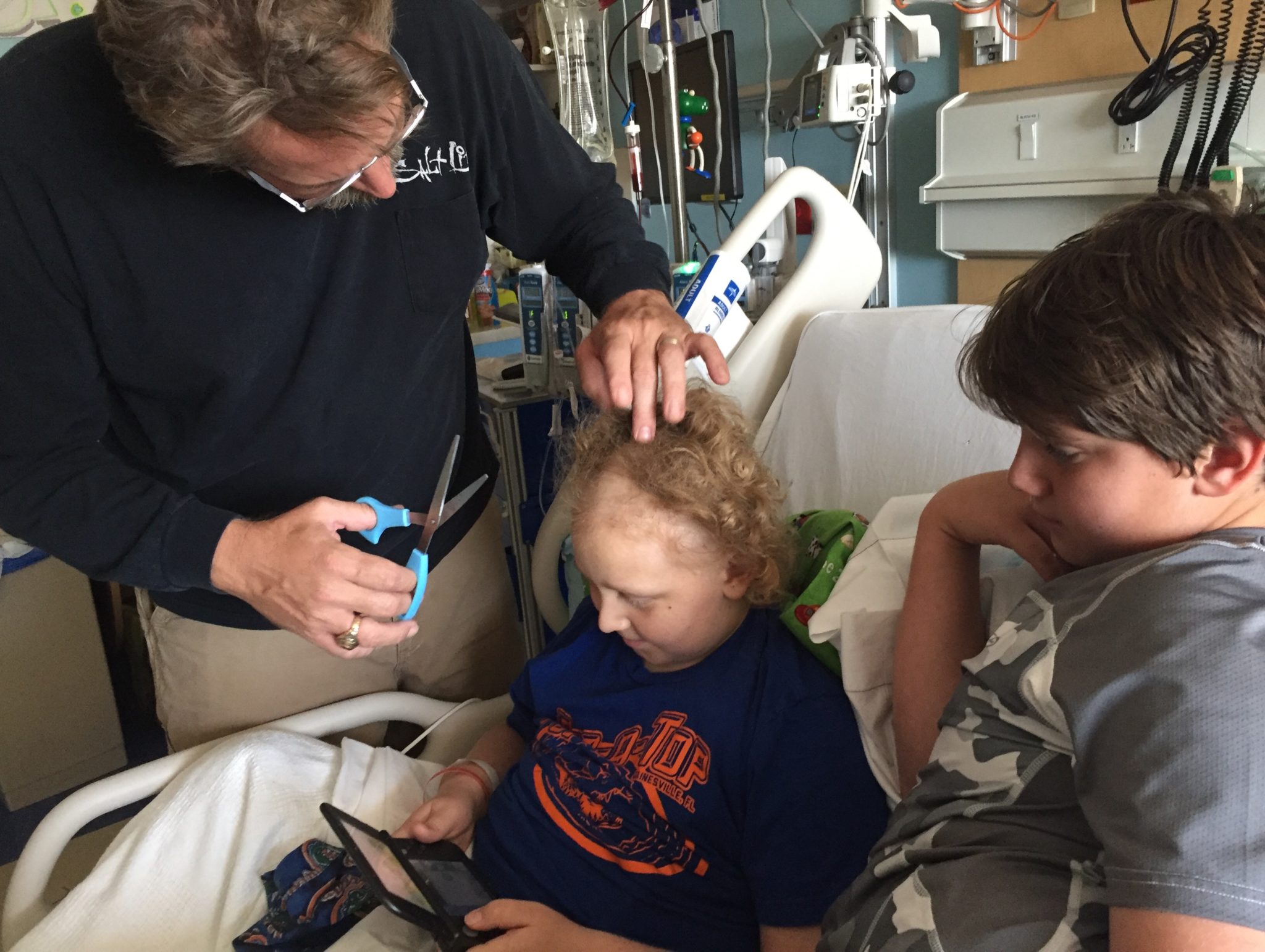 Benji slept a lot better last night. We both did. He woke up for the day and coughed for quite some time, but cleared his lungs and moved on. He asked for a hot bath to bring him comfort. The cough disappeared with the daylight hours.

This morning’s numbers were sobering. The bright spot was Benji’s ANC, which is now 60; it could be a sign that his marrow is starting to recover. But his hemoglobin was 6.7 and his platelets were all the way down to 1,000. He needed transfusions of both blood products today. His blast percentage was 69. His absolute number of blasts is still manageable, but it’s considerably higher than yesterday. I understand that these things vary day to day. It doesn’t really lessen the blow.

I brewed my first cup of coffee and got to work at the computer. I emailed CHOP, the National Institutes of Health, our CMMRD specialist in Toronto, and our medical Santa, Dr. Dover. I copied studies I’ve been reading about dual immunotherapy. This seems like a sensible approach to me, and the research is compelling, but it doesn’t look like an accessible option. The clinical trials that are open target one specific protein (CD22), not two. I want creativity here.

I try to skim past the words prognosis and survival in the background of the studies and get down to the word promising in the conclusion. Promise. One mom in the T-cell therapy group online reminds me that someone always has to blaze the trail for new treatments, to be the first. Maybe Benjamin can find his way into a treatment plan that will target every leukemia cell in his body and build a bridge to bone marrow transplant. Maybe this path will emerge. I promise, I will never, ever stop trying.

Benji remains clinically stable and relatively comfortable. An x-ray technician came to the room during his red blood transfusion to rule out any lung infections the doctors can’t hear. The x-ray showed a little congestion undetected by anyone’s stethoscope, so Benji was asked to inhale through an incentive spirometer throughout the day. It measures lung capacity, and it appeals to Benji’s competitive spirit; he tries to “beat his high score.” But the deep inhales made his spleen hurt. His stomach also hurt this morning and his head was really bothering him where his hair was coming out, but he was happy. I hate every minute of his pain but I am so grateful that his complaints are few and far between right now. When Michael and Banyan arrived with the Sunday donuts, we decided it was time to help Benji’s hair along, and make his head feel better.

Michael and Banyan made an amazing support team. Banyan sat next to his brother to play a new video game while Michael carefully removed the large chunks of matted hair from the back of Benji’s head. Benji only had a few spots of hair rooted to the scalp, and they were tangled with the hair that had already come out, giving him a pulling sensation all over. Once the hair was gone, we moisturized his sweet head with coconut oil and covered it with his Gator bandana. The whole thing was hard to watch. I couldn’t help a few tears. Hair isn’t important, we all know that, and goodness knows Benjamin looks adorable without it. It was hard because I can’t believe he has to go through this again, and because I’m overwhelmed by how innately resilient he is.

We had a busy day up here in our little room away from home. Michael’s cousin Jason and his son Jarrett came to visit, and Kathy and Gana joined us as well. The boys played together all afternoon. Benji was finally hungry in the early evening, so Kathy procured a fish sandwich for him–his one request–from a nearby restaurant. While she and Michael went to pick up the food, Benji and the rest of us walked around the floor. The boys tossed the football the whole way. We ended up in the play room. Benji’s belly started to hurt and he let me know it was time to go back. I could see that he really didn’t feel well, but he hardly complained. He got back into bed and asked for a heat pack, then kept on playing. His fish sandwich hit the spot. He ate nearly the whole thing.

By shift change, everyone had gone to prepare for the week ahead, and Benjamin and I settled into our nighttime routine. He has been staying up late recently, but tonight, he was asleep by 8:00pm. He was exhausted. I tried to imagine, for the millionth time, what it must feel like inside his body. How it might feel for him to have his entire head of hair removed today, or to have an enlarged spleen pressing on his lungs when he breathes, or to have someone else’s blood flowing through tubes into his chest. How his bones might feel when they are tired. I can’t know. But I know that he had a wonderful day with his family. I know that his energy is as bright and strong as it has ever been. I know that he looks beautiful right now, sleeping soundly.