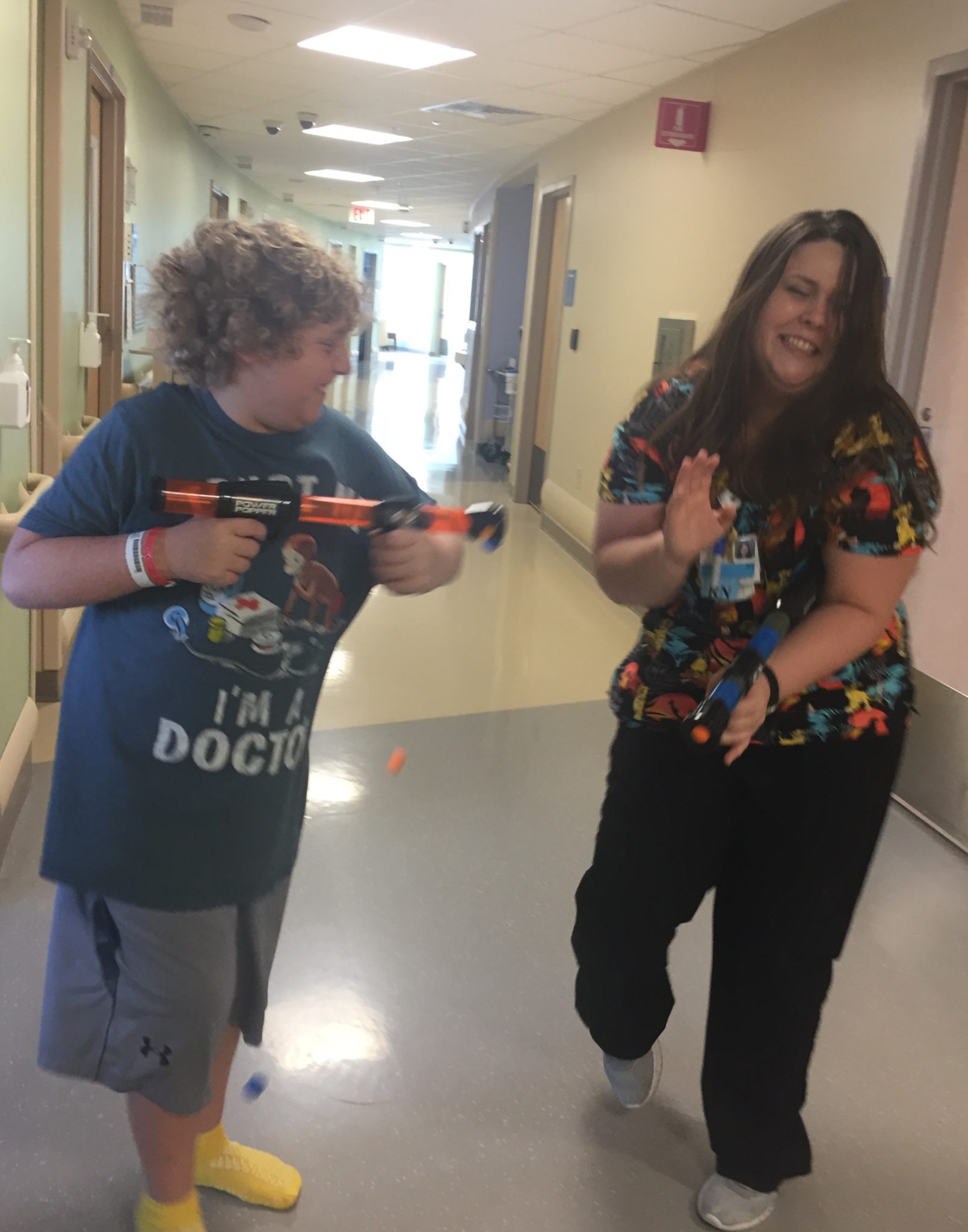 Benjamin didn’t get up at all last night to use the bathroom, but when he woke up this morning, he corrected his problem with a record-breaking liter of urine. I’ve never seen so many people get excited over a single pee. The next measures would have been drastic and uncomfortable and I’m super thankful that he avoided them on his own.

Benji was still a little off, physically–he was pale, and his appetite wasn’t where it normally is–but the mood in our room was joyful and light. I think we needed something to celebrate today. We played music loudly and built Legos and didn’t even think about doing schoolwork until the afternoon.

The team huddled around their portable computers outside our door for a much longer time than usual before entering our room for rounds. Dr. Wishnew told us that because of yesterday’s bladder antics, she’d like to send a urine sample to be tested for BK virus, a common ailment of immunosuppressed kids. We also learned the results of Benji’s labs. His platelets and hemoglobin both dipped only slightly (they’re basically holding steady). His creatinine came down a touch and his white blood cell count did too, which encouraged me. His differential was, again, inconclusive. The blast category was still positive at 3%, but there weren’t enough cells to accurately identify or send to flow cytometry. And since Benjamin’s absolute neutrophil count (ANC) isn’t yet recovering–it was 30 today–we are still in a holding pattern.

I called Michael to give him the morning report, and his frustration was unmasked. I shared it. It is so difficult to just accept a “let’s wait and see” position when we are potentially allowing an aggressive disease to progress. I tried to explain as best I could the logic behind waiting, as it was delivered to me, but I found myself floundering. I told him I’d discuss it further with Dr. Wishnew. I also posted about it in the moms’ group, which yielded several responses affirming the presence of recovery blasts in other kids who have relapsed.

Dr. Wishnew’s second explanation gave me a bit more comfort. She showed me Benji’s trends in other categories from the last few days, and said they look normal for recovering marrow. She explained again how the newly forming white blood cells resemble leukemia blasts, and how the wait and see approach makes more sense than moving straight to a bone marrow aspirate now. I understood. I explained our frustration, and she understood too. I felt stuck. But there wasn’t anything else I could do.

Benji’s good mood continued in the afternoon. We followed his lead. We took several wagon rides around the floor. We engaged in an all-hallway Nerf war with the nurses. While were were plotting a particularly sinister move with one of the technicians, Dr. Oshrine came by to see us. We paused our game.

Like he has so many times before, Dr. Oshrine set me at ease with his clinical explanations. I told him how frustrated we were. Up until yesterday we felt totally confident with the plan moving forward. Now we don’t know if that will be our plan or not, and we have to wait to find out what is going on. He said he understood that we wanted a definitive answer on these blasts, but he would be skeptical if a pathologist were to say with certainty that he or she could properly define them. The only ways to know for sure are with a large enough sample to be categorized by flow cytometry, or with trends in the labs that indicate a population of disease that is suppressing Benjamin’s marrow beyond its recovery capabilities. Benji is still very much within a normal window of time to not yet be recovering. The best approach is to watch his numbers over the weekend and decide early next week when to do the aspirate.

I told our favorite oncologist that even though he has our confidence, we’d discussed getting a second opinion on treatment options. We understand that different centers have different philosophies, and we’ve just been hit so hard lately with challenging and complex news. He completely understood and supported us in the process, should we choose to pursue it. He was very open with me on the different schools of thought of the best hospitals around the country. Basically, in a relapse setting such as Benjamin’s, the treatment paths are always bridges to bone marrow transplant. That is the desired end result. We just need to get there.

There are three paths to transplant: conventional chemotherapy only, immunotherapy with Blinotumomab, and immunotherapy with Car-T cells, which All Children’s does not currently administer. In some children who relapse, these options are randomized on a clinical trial. Our team decided the trial was not in Benjamin’s best interest because of his Ikaros gene mutation. The inclusions of Dasatanib and Blinatumomab on Benjamin’s roadmap were specific, thoughtful, individualized, unique decisions, and they make sense to me. I ended the conversation asking Dr. Oshrine to please be candid with us if at any point he felt we should seek treatment elsewhere, and he absolutely agreed to do so.

I rejoined Benjamin and the technician on our mission to attack Benji’s favorite nurse with silly string (which was a success). We crossed paths with Dr. Oshrine again, and I remembered one last thing I wanted to discuss. I told him I assumed Banyan’s genetic results hadn’t come in yet (his testing for Lynch Syndrome/CMMRD), otherwise he would have brought them to me already. He smiled and showed me a piece of paper in his hand. “Actually, I just printed them out.”

I couldn’t help it. All the tears I’d been holding during our earlier conversation earlier spilled out. This was the best possible outcome for Banyan. He has zero increased hereditary risk for cancer. I felt such deep relief. Since Benjamin’s positive CMMRD diagnosis, I hadn’t allowed myself to consider the implications of a positive result for Banyan. I just couldn’t do it. I know we would have handled it like we have handled everything else, but I believe it may have been the end of any semblance of sanity to which I am presently clinging. Banyan is healthy. It’s something I have always been grateful for, of course. It just feels so different now, this level of gratitude.

Benji completed his school work for the day and a long game of I Spy through the big bay-facing window at the east end of the hall. Michael and Banyan brought us dinner after work and we all sank into the comfort of each other. I took a walk with Banyan and explained the results of his test. He handled the conversation like he has handled so much these last several weeks, with grace and maturity. They left at bedtime, to return as soon as they can tomorrow.