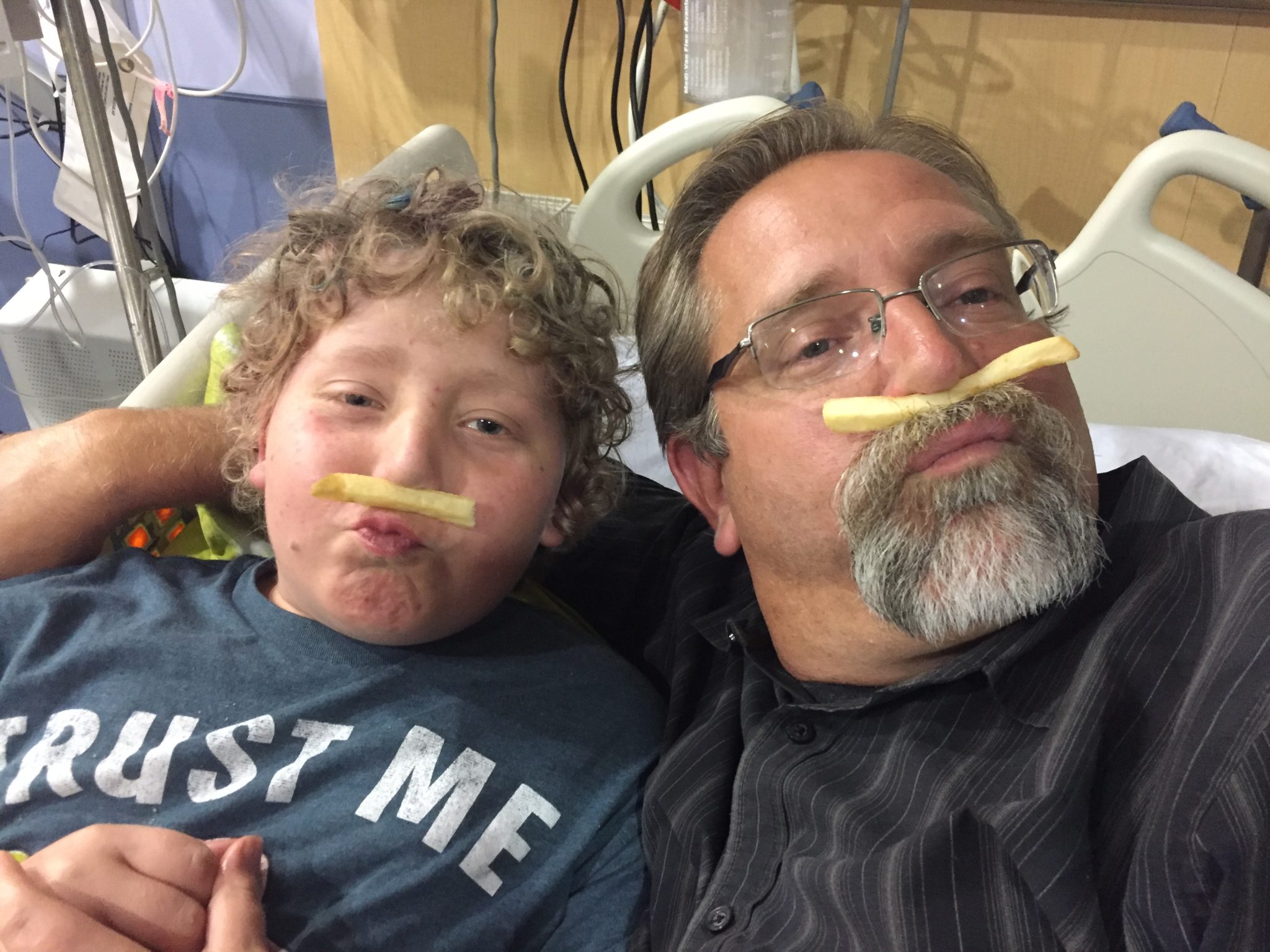 So much information to process, constantly. So many opportunities to wander down dangerous roads, mentally. The rewards are great when the mind is quiet and presence comes easy.

Benjamin and I tried to sleep as best we could, but last night’s dose of lasix woke us up hourly for urine collection. It was effective, however. By the morning his balance was negative again, and at evening weight check he was down 1.5 kilograms. I asked the nurse to check his creatinine today, just to be sure the problem didn’t lie within his kidneys. His creatinine levels are perfect.

This morning’s rounds were somewhat frightening, to be honest. First we went over the normal stuff. Benji’s hemoglobin is still nicely boosted from Monday’s transfusion, and his platelets are holding strong at 28,000. The team agreed to lower his threshold for future transfusions and asked for a stool sample to check for more occult blood. Then I asked what his absolute neutrophil count (ANC) was, and they said the differential wasn’t back yet. I don’t like those words. It usually means something didn’t look right, and they need to send it to pathology for examination. That’s what happened today.

Benji’s blood draw this morning showed a positive in the blasts category on his lab report. The oncology team would not allow me to freak out. They said that when bone marrow is recovering, new, immature cells can closely resemble leukemia blasts, and the lab doesn’t have a way to categorize this possibility on paper. Also, because they look so much alike, they have to send them to pathology to rule out leukemia cells. It all makes sense to me, and the logical side of my brain tells me that it’s good news, actually, if his marrow is recovering. Still. I don’t like the word blasts, and I don’t like red warnings on lab reports when I wake up in the morning.

We were just getting started on schoolwork when Dr. Oshrine walked into our room, with a woman I’d never met before. It was Julie, the bone marrow transplant counselor. She had a thick folder under her arm. Benji was happy to work on his new tablet while I stepped outside with our guests.

I knew that Julie’s presence meant they had some news for me about a potential donor for Benjamin. They’d completed Benjamin’s high resolution HLA typing and searched the registries. Dr. Oshrine told me that, surprisingly, there were only a few candidates for a potential match, and after vetting them for age and other factors that may not make them desirable donors, they were left with only one. And it’s an international donor.

Dr. Oshrine strongly recommended we move forward with the expectation that Benjamin will receive his bone marrow from one of us, most likely Michael. They will still reach out to this potential donor for high resolution typing, but because of so many different variables that can interrupt an unrelated donor process–especially an international one–we need to have realistic expectations. Dr. Oshrine seems to almost prefer the parental donor, even with us being half matches for Benjamin. He would obviously have much more control of the process, the cells would be readily and freshly available at the time of transplant, and the advent of Cyclophosphamide administered to the newly transplanted cells has drastically reduced the possibility for Graft vs. Host Disease (GVHD) with a haploidentical (half-matched) parental donor.

So, we move forward. The team pursues the potential donor and weighs the risks and benefits of such a donation. Michael will get a complete physical and be screened as a potential donor. He is preferred over me because of the small chance that I may have passed an antibody to Benjamin while carrying him that would make his GVHD risk higher. Dr. Oshrine cautioned me not to consider this news a setback. I reminded him that I’ve heard this phrase from him a few too many times lately. I’m getting uncomfortably accustomed to the feeling.

I’m also trying to resist the trap I fell into while considering the possibility of Banyan donating marrow to his brother. The idea of Michael as Benjamin’s donor is beautiful to me. If, for some reason, we don’t go down that path, I can’t feel disappointed that the poetic solution wasn’t chosen. We will make the choice that’s best for Benjamin, whatever that means.

Dr. Oshrine and I talked about ideal timing for Benjamin’s next colonoscopy and (hopefully) polyp removal, and also the need for Benjamin to be clear of any cavities for his bone marrow transplant. So I made a few phone calls and appointments today. Our timeline is looking a little more clear. Benjamin will finish reinduction and get a bone marrow aspirate. We will get a week off or so, then he’ll come back to the seventh floor for two 28-day rounds of immunotherapy, with breaks and bone marrow aspirates in between. Our window for bone marrow transplant will likely open up in January.

While I was on the phone with Michael trying to explain what I’d just been told, Sarah came down the hall pushing a microwave in a wheelchair. It was science day. Benjamin was excited to see her, and her timing was great. His nurses were just coming in with all of his chemotherapy for the day.

Benjamin got his weekly dose of Vincristine today, followed by the heart protectant Dexrazoxane, and the bright red Daunorubicin. He took his daily Dasatanib and was protected from nausea by Kytril. He felt totally fine. He and Aunt Sarah started doing their weekly experiments, and I took a much needed shower.

In the afternoon, I received a phone call from a pediatric oncologist with the FDA. He was responding to an email I sent regarding the Erwinaze shortage. He was actually the original chair of the Children’s Oncology Group. We had a candid conversation about the shortage. The last batch that was released contained particulate matter. It was contaminated. To avoid as much of a lapse in supply as possible, the company released the batch for use in intramuscular injections only, with careful filtration instructions, and not for intravenous applications. He told me the FDA was working around the clock to try to release the inventory that is available, but cannot and will not do it until they are absolutely sure it is safe.

My friend’s daughter still has not received the shots she needs. Everyone we have talked to about this, from the FDA to COG to the pharmaceutical company, has been extremely kind. But no one can tell her when. So today I finished summarizing the facts as I see them, and shared the story via social media. It felt good to release the information. I hope a ripple of awareness follows.

The conversation with the FDA oncologist concerned me greatly. I knew about the particulate in the batches, but I hadn’t really considered the ramifications of Benjamin possibly getting shots from the batches in question. With all of his strange gastrointestinal symptoms lately my mind was kind of racing. I put a call in to the oncology pharmacist to come see me during rounds tomorrow and tell me which batch Benji’s shots came from, and what a reaction to a fungal or mold contamination might look like. I need some reassurance that this is something I should not be worrying about.

Later in the afternoon, Benjamin walked the halls performing his recently learned card trick to every nurse, technician, and food delivery person he could find. He was a hit. Two of our favorite nurses came to hang out in our room, when they didn’t have to, just to be kind. They both work in the bone marrow section often and shared some tips with us. I was thrilled to learn that the immunotherapy rounds of inpatient stays will not be in isolation. That’s a game changer, mentally.

In the evening Michael came to see us, while Banyan went home from school with a buddy. Benjamin had a full and happy day. He laughed so much today. When my mind is strong and I can stay out of the rabbit hole of fear, I can be present. When I’m present, and I can hear his laughter, everything feels manageable. Beautiful, even, sometimes.