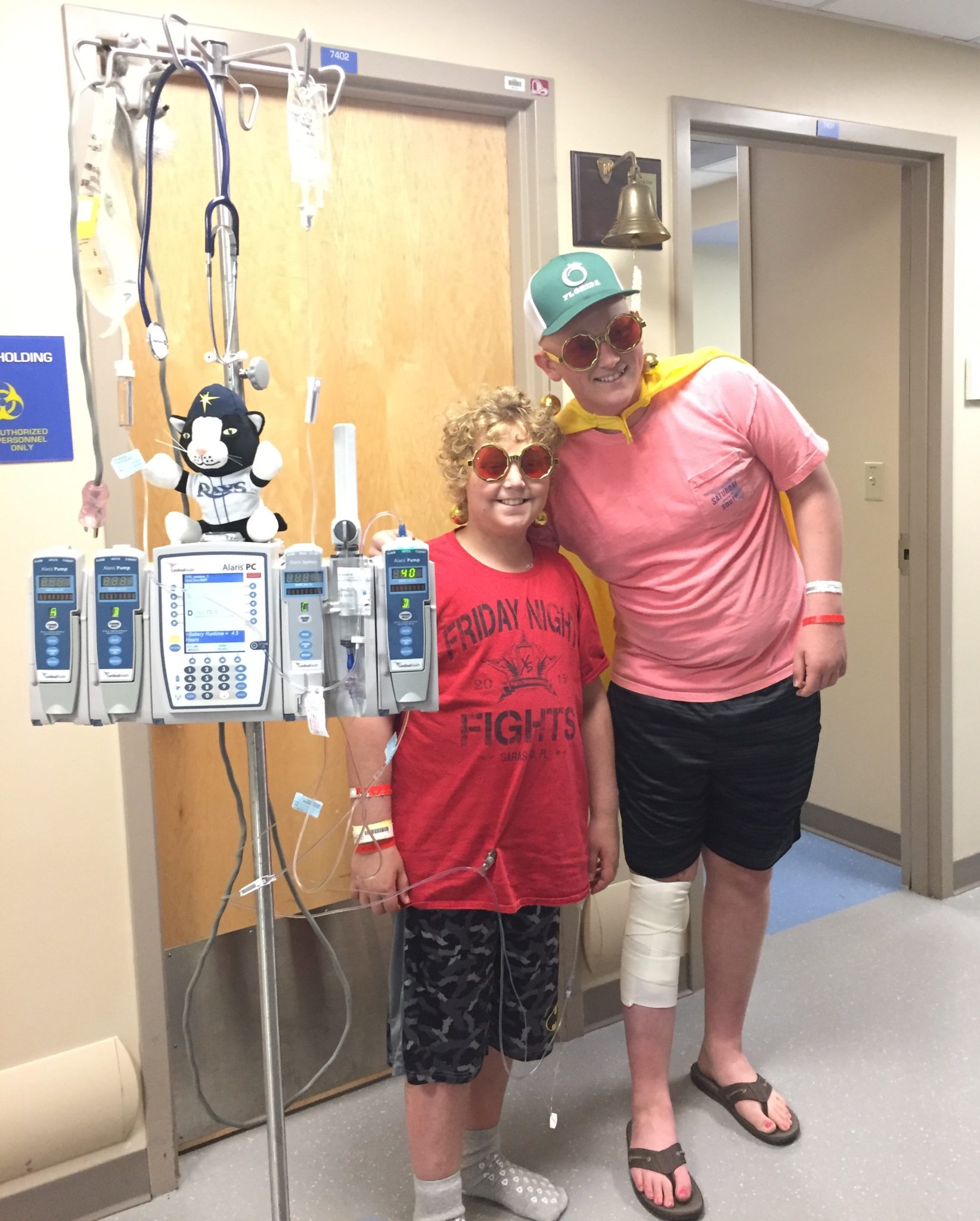 I woke up early and tried to let Benji sleep as long as he could. When the day shift nurses started coming in, taking vitals, listening to his heart, getting medicines out of the supply cart, and all of the other clankety things that happen in the morning, Benji opened his eyes. The first words out of his mouth were directed at a nurse practitioner who was assessing his body in one way or another. “You should be a chicken for Halloween,” he said, quite seriously. I’m sure he had a perfectly logical reason why, but I didn’t dare ask.

Benji’s appetite still warranted two breakfasts this morning. This will probably be true for the next week or so post-steroids. Between meals, we met with the team during rounds. Benji’s platelets are dropping again, down to 23,000. His hemoglobin is holding steady. His chemistry looks good. His absolute neutrophil count (ANC) is down to 530. I expect he’ll be “severely neutropenic” tomorrow.

Aside from sleepiness, Benji felt good this morning, so we got busy with schoolwork. He accomplished quite a lot before lunchtime. We were just getting ready to take a math test when Austin and his mom came by our room.

Austin is one of the two teenagers who were planning on ringing the bell Friday signifying the end of their planned admissions. He is the “big brother” of the floor. He takes time to meet, play with, and give gifts to many of the younger kids he meets up here, including Benji. He’s become kind of an All Children’s role model.

Today Austin learned he’d cleared all chemo from his system a day early, and he and his mom could go home; a double blessing since a hurricane would be crossing their path tomorrow. Benji and I quickly got up to join nearly everyone else on 7 South in the hallway for the bell ringing ritual celebrating our new friend.

It was quite an emotional moment. The music therapist kept time while the nurses sang the goodbye song one of them wrote for the bigger kids, with jokes about IV Benadryl, rashes, beeps in the night and other things Austin won’t miss about 7 South. His mama couldn’t help crying (neither could any of the other mamas there). Austin triumphantly rang the bell, which could hardly be heard over the sea of cheers. When it was over, everyone stood in line for hugs and pictures. Benji was looking at his new friend with admiration, but Austin could see that he was a little shy. Over the commotion, Austin asked, “Could I get a picture with just me and Benji?” It made Benji feel like a million bucks. I’m so glad we got to meet this sweet kid and his family.

After we got back to the room, Benji started feeling a little nauseous. He said his tummy hurt badly and asked if he could take a nap. Of course, I said, and he was asleep as soon as his head hit the pillow.

In the unusual quiet brightness of day I thought about the road ahead of us. There are going to be so many days when Benji feels much worse than today. It sucks the wind out of me when I contemplate the length of time for which this will be true. I try to return to the moment. Sometimes I fail.

When Benji woke up nearly two hours later he begged to go to the bathroom immediately. He had an bout of serious diarrhea that was followed by another one within the hour. Our bathroom is equipped with collection gear, so I gathered a sample. I asked our nurse to send it to the lab and test for C. Diff, short for Clostridium Difficile, the dreaded, highly contagious bacteria that infects kids with compromised immune systems and weakened guts. It’s a common offender on oncology wards.

While the results of the test were pending, Benji was placed on isolation. All of the nurses and techs and custodians coming in had to wear gowns and gloves. Benji was not allowed to leave the room, and anyone else leaving had to wash hands thoroughly to avoid spreading the potential contaminant. It meant we couldn’t attend the second bell ringing of the day, but Benji was okay with that. He wasn’t feeling terribly festive. The sweet high school girl that rang the bell delivered a lollipop to him on her way home.

Isolation didn’t mean we couldn’t have company, so Kathy, Gana and Banyan came for a visit with some nourishing soup per Benji’s request. Michael is still under the weather. We are missing him so much. I know how hard it is for him to stay away.

After everyone left and Benji was preparing for his bath, we got the good news that he is negative for C. Diff, and therefore off isolation. I’m relieved but obviously curious as to what caused his discomfort. Thankfully it was contained within the span of an hour. He had a large amount of chemotherapy yesterday. Perhaps he was just detoxifying in a significant way. We will definitely be monitoring his belly in the coming days.

Benji and I had tea as we snuggled in for bed and playoff baseball. While I was holding his hand, I noticed his left wrist was swollen. His whole arm looked a little mottled, upon closer inspection. I called our sweet nurse in and she took a look and measured his wrist to compare any changes tomorrow.

This morning, I wondered when our team might mention a discharge date. Now, I’m thankful we are still here. It’s where we needed to be today.