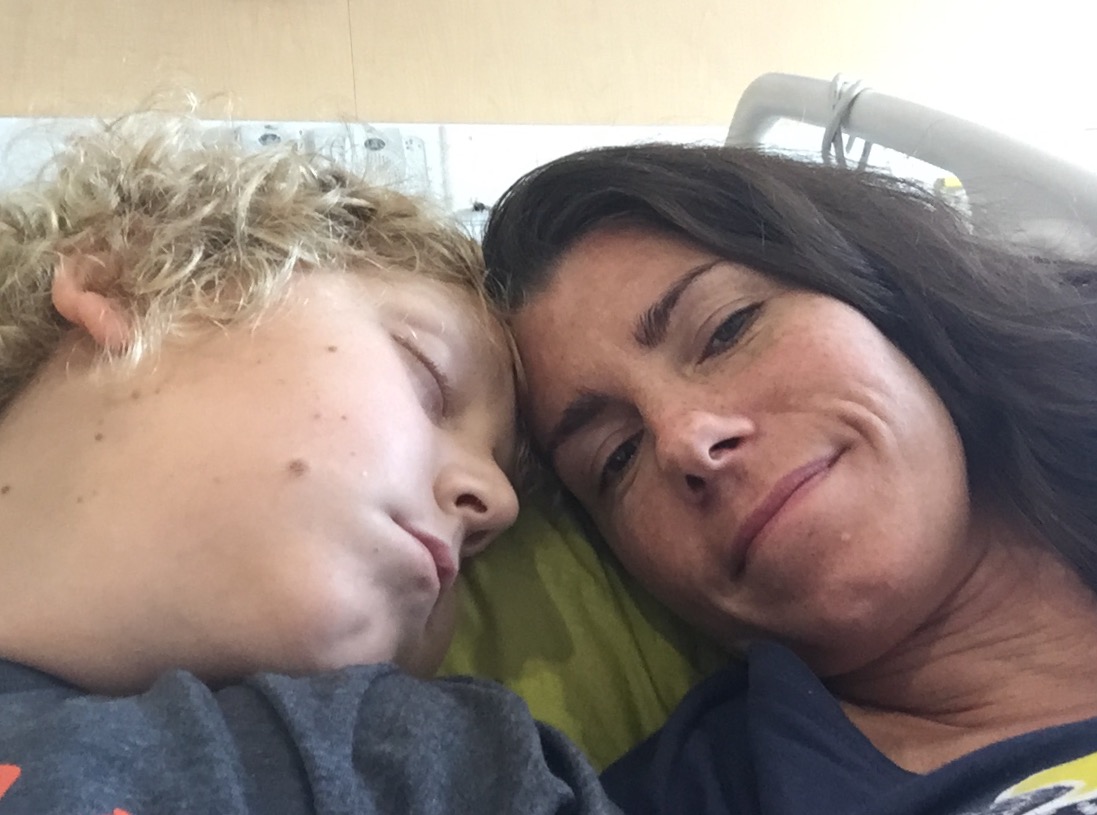 Benjamin’s reinduction phase is halfway complete. He took his last dose of Dexamethasone tonight. His allopurinol has been discontinued because his uric acid has stabilized, as has his phosphorous, sodium and calcium. His internal rapid response team is backing off a little, making way for the next line of defense. Things feel a little less tenuous at the moment.

Dr. Moore increased Benjamin’s platelet transfusion threshold from 10,000 to 20,000 this morning as a result of the occult blood that remains in his stool. Since his 6am labs showed a platelet count of 12,000, that meant a transfusion today. It was his 27th.

The last day of steroids means a crazy appetite. Benji ate breakfast, then second breakfast, then sat down to start his schoolwork for the day. He completed a very impressive amount in just a few short hours. We took a break for lunch, then read his chapter book of choice until he fell asleep for an afternoon nap.

I used Benji’s sleep time to catch up on some emails, phone calls, and much overdue yoga. One of the calls was to Moffitt Cancer Center. I wanted to ask them about the possibility of coordinating Benjamin’s eventual polyp removal with their GI team. The All Children’s GI team has recommended a physician from Tampa’s St. Joseph’s Hospital, because he is the only one in their group who performs capsule endoscopy, which may be able to identify smaller polyps and at more frequent intervals. They also feel this St. Joe’s doctor can remove the polyps safely. Maybe he is the best candidate for the job, we just want Moffitt’s opinion, since they have experience with CMMRD. I should be getting a call back tomorrow.

The genetic assistant from Moffitt also told me that my official genetic test results are in, but Michael’s sample was insufficient, so they’ll have to schedule a blood draw for him. She asked if I wanted my results separately from Michael’s. I declined. We both know what the results are, by definition of Benji’s CMMRD. I can wait. We’re on this road together. (And it’s not like I’m leaving All Children’s to go get a colonoscopy any time soon.)

For the first night since Benjamin’s admission, Michael didn’t come to the hospital. He has caught a cold. I’m sure his immune system is taxed from managing all he has been managing these last two weeks. He is trying desperately to get better so he can return.

Kathy brought Banyan up for a visit instead tonight, feeding us with exactly the meal that Benji requested at the end of his steroid pulse: shrimp fried rice and egg rolls. He took a warm bath after they left and fell asleep happily watching Wild Card baseball. Tomorrow he will receive his third doses of Vincristine and Daunorubicin, and his final round of Erwinia shots. He’s doing such a good job getting through this intense phase.