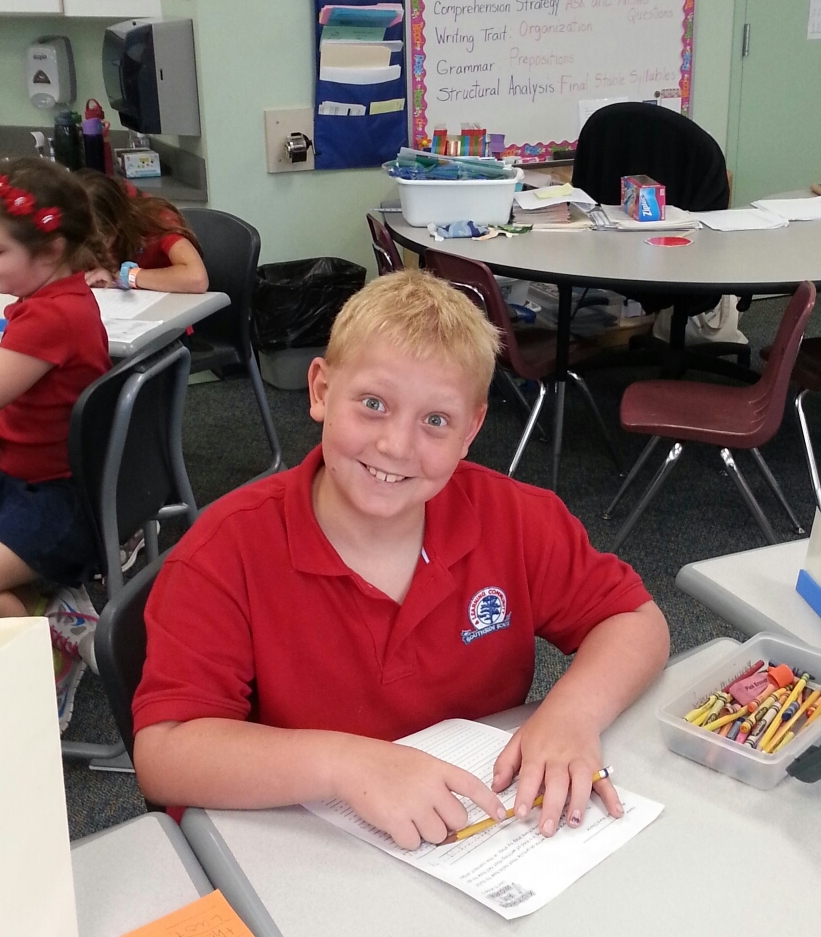 Benjamin sprang out of bed this morning and got dressed for school. He said “I’m so excited!” and was one giant smile. His nerves rose with the sun; by the time we dropped Banyan off, Benji had a tummyache. I know it was butterflies, because I had them too. We decided to return home for a few minutes and let the dropoff hustle and bustle subside, then sneak in right after morning announcements. It was a good plan.

Here’s where I give great big props to Benji’s teacher, Mrs. West. She knows this journey he’s been on so well, as she’s been visiting weekly since we’ve been home. She knows how big this day was for him, and how brave he had to be to walk into that room. He was concerned everyone would be “too hyper” when they saw him; translation–he thought he’d feel overwhelmed by all of the love and positive energy directed at him. I completely empathize. Crowds of people I love were impossible for me to navigate a few weeks ago.

Mrs. West prepared the class by dimming the lights, and talking to them about making Benji’s arrival as normal and calm as possible. When we arrived at the door, she came alone, and gave us a warm, quiet welcome. Benji hugged me, hung up his backpack, and walked to the seat that’s been waiting for him all year. I know his heart was pounding as seventeen pairs of bright sparkly eyes watched him sit down. But by the time I left a few minutes later, he was talking and laughing easily with his classmates, who were trying hard to fight the giggles. They’d missed their friend.

I talked with Mrs. West for a few minutes about our plan for the day. I’d pick him up after lunch, but before they went to specials and recess. I thought a half day was plenty for his first day back. I also thought it was probably safer for him to stay in his class, rather than venture on to larger groups of kids and shared equipment. She even allowed the students to have lunch in the classroom–a rare and special treat.

Just before I left, it started pouring outside. The kids didn’t notice. They were too busy grinning from ear to ear. I refused the umbrella Mrs. West offered. The rain provided a nice camouflage for the happy, grateful tears I couldn’t stop.

The time Benjamin was away flew by quickly. I ran an errand, put away the laundry, and got a little bit of work done. When I picked him up, he said it was the best day ever. We played until Banyan came home, then played some more after their homework was finished, then played some more after the delicious dinner that Grammy and Noni brought over. He played with family, friends, and neighbors today. I didn’t want to tell him to come inside for bed. We all know what’s on the other side of tonight’s sleep.

This break from chemotherapy has been deeply nourishing. It’s hard to walk into tomorrow and resume our places in the other weird world we now occupy. As I fall asleep, I will practice gratitude for the healing that will begin again in the morning. I will remind myself that it is the path to every day feeling “normal,” instead of just two weeks. Benjamin has been absolutely delightful during this break, full of energy and independence, reveling in a body that feels good. I will hold the vision of this energy as we move into this next phase of treatment, and beyond it.

Tomorrow morning, we will head back over the bridge. We will find out bright and early what Benjamin’s absolute neutrophil count (ANC) is and move into the second half of the Consolidation Phase. He will have his finger poked and his port accessed. He’ll receive intravenous zofran, Cytarabine (Ara-C), and Cyclophosphamide (Cytoxan) in the Infusion Center, along with six hours of IV hydration. He’ll remain accessed for the rest of the week, so that we can return each day for more Cytarabine. Tomorrow night, I’ll put on the blue gloves and prepare his oral 6MP, for the first dose of his next two week cycle.

I am so proud of him.