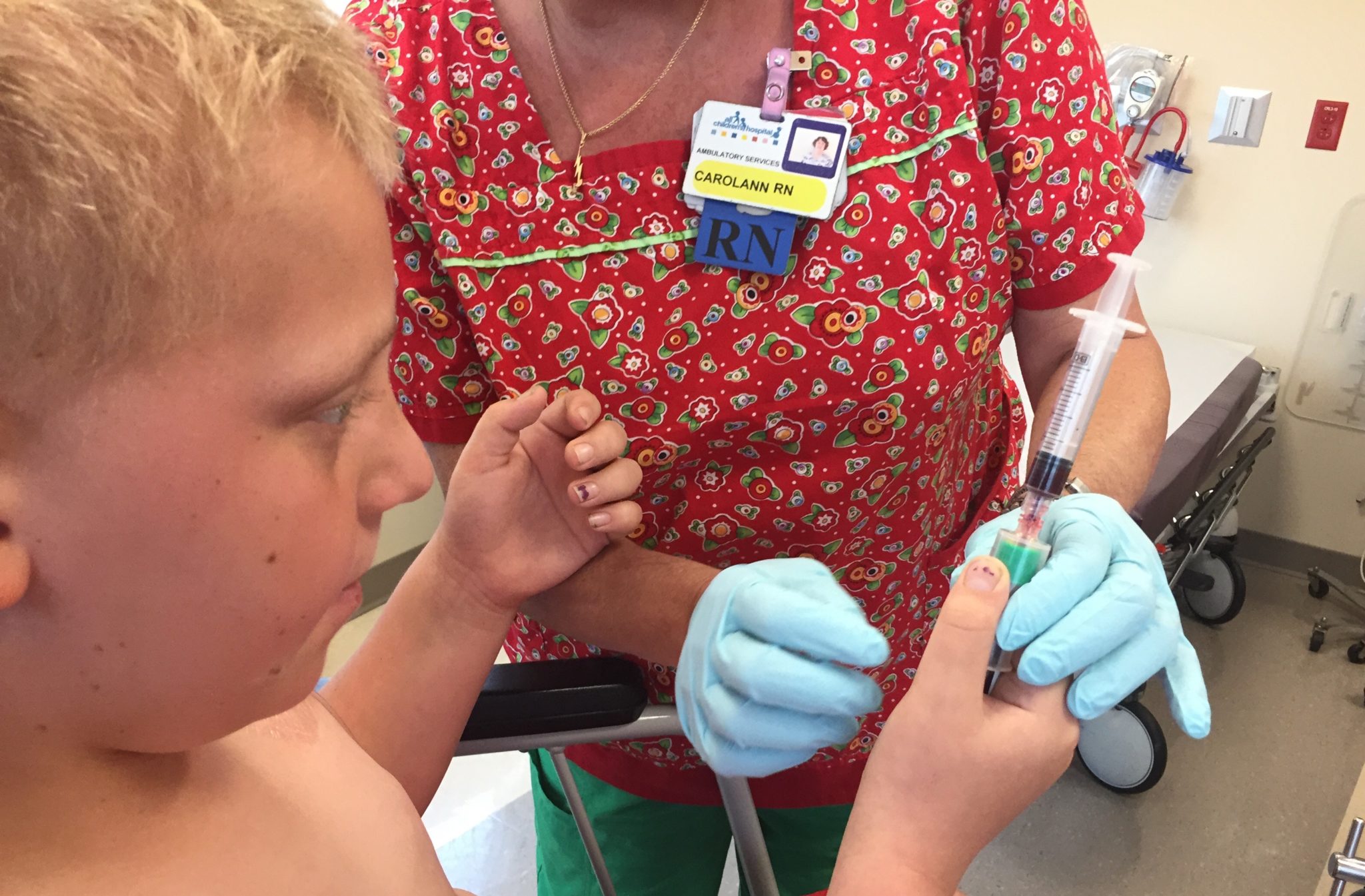 It was a dark morning as we sent Banyan walking down the street with a plate of banana muffins to his friend’s house to catch a ride to school. The muffins were symbolic; if I could make muffins for everyone who has done us a kindness these last three months, I could open up a bakery. I saved a few for Michael, Benji, and me, and we headed north over the Skyway. It was a gorgeous drive. The orange sunrise reflected off of the bright yellow cables of the bridge, punctuating a backdrop of pink clouds and calm, indigo waters. We were moving forward.

Our dream team of nurses was ready for Benjamin in the Infusion Center today. The dancing started immediately. The first order of business was to collect blood for a complete blood count (CBC). My college friend Tracey was on our care team today; together with her, we made the decision to forgo the finger poke and access Benjamin’s port for the CBC. This was our collective vote of confidence that Benji’s absolute neutrophil count (ANC) would be where it needed to be to continue with Consolidation today. Benjamin helped with the blood draw, suctioning it into the collection vial. The child is amazing.

The ANC was there, but just barely. We needed a 750, and Benji’s blood gave us a 761. Dr. Oshrine had conveyed to Michael last week that we would have continued today no matter the counts, but I was still relieved to see the number above protocol. It’s low enough that we can expect a pretty significant period during which Benjamin will have zero immunity. This will begin in a week, give or take. This time, we’ll be prepared.

With the blood drawn and the counts met, the nurses began the two hour pre-hydration process necessary to administer today’s Cyclophosphamide. This medicine carries with it a high risk of cystitis, or bleeding of the bladder. Hydration is key. When Benjamin got this medicine at the beginning of Consolidation, we were told emphatically that his urine had to reach a certain specific gravity (dilution) in order to begin the chemo drip. So today, we were surprised when one of the nurses strapped on her gloves and blue gown and mask at the end of the two hours, without yet collecting a urine sample. When we inquired about it, she said that it had been “crossed off” of Benji’s requirements for the day. We may have ruffled a feather or two, but we asked that the specific gravity test be added back to his to-do list. Benji barely passed the dilution mark last time, and his dosage today had increased because of an increase in body surface index. We knew the test was a simple step to take, and we wanted to be sure his body was ready for the medicine. When you weigh the risk of a nurse’s ruffled feathers against the risk of a bleeding bladder, there’s no contest, really.

While we waited for the dilution test to come back, Benji got a preventative dose of Zofran and his first of eight doses of Cytarabine (Ara-C) in this new cycle. His urine test came back–he passed (yay!)–and the Cyclophosphamide began. Both medicines took less than an hour to administer, all told. Benjamin was re-hooked to his hydration, and there we sat for the next four hours.

We had plenty of pleasant distractions to pass the time on either side of Benji’s chemotherapy. He knocked out three reading tests during pre-hydration, and an adverb quiz in the afternoon, bringing his total number of assignments left for the quarter down to just three. The quarter ends tomorrow. We will get it done. The best distraction of the day was a visit from Aunt Sarah and Lilye, who is on Spring Break and touring colleges in our area. There were a few moments of stir crazy from my boy, but mostly, he did such a great job of keeping everyone happy and entertained, nursing staff included.

In addition to the Cyclophosphamide and Cytarabine, Benji also began his second two week stint of 6MP. This one has the potential to mess with our evening flow, because it can’t be given within hours of food on either end. We timed it well tonight and gave it to him just as we were leaving the hospital. By the time we came home, Taco Tuesday was in full swing.

Near the end of the day, Benjamin started pushing the behavior boundaries. My sensitivity to it was heightened by lack of sleep, but I understood. If I feel tired, I can only imagine what he feels after this long day back in chemo-land. I was thankful for my sister during Benji’s moments of spiciness; she reminded me that his spunk is serving him so well right now. This I know. This I will remember. By the time we snuggled up to Roald Dahl in our pajamas, all was right again.

On today’s adverb quiz, Benji was asked to write a sentence using an adverb that described “when.” He wrote, “Tomorrow, I will come back to All Children’s Hospital.” It’s true; and the next day, and the day after that. He’ll get Cytarabine on seven out of the next nine days. We’ll need lots of sleep, lots of patience, and lots of hand washing in the next month or so. But we’ll make it. We know what’s on the other side.