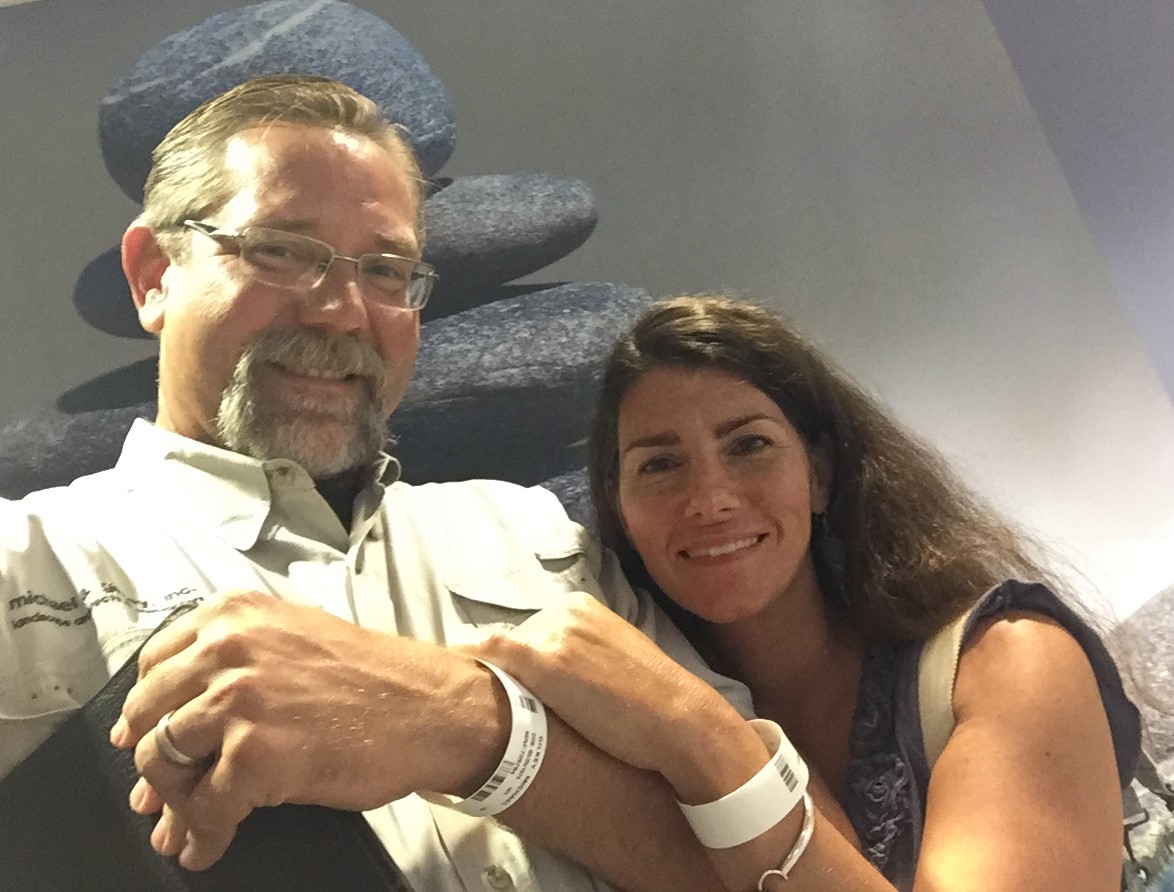 Benji walked down to our friend’s house to catch a ride to school this morning. Michael and I dropped Banyan off early at school for his first TSA meeting (a very cool technology club he’s joining), then we drove north to Moffitt Cancer Center in Tampa.

The strange calmness persisted into today. I wasn’t nervous. I don’t think Michael was either. We were hopeful and eager for more information. We had time to get a little clarity with each other on the drive. I’m so grateful we are navigating this together. We are a united force, and I can’t imagine doing this any other way.

Moffitt Cancer Center is quite an impressive facility. We filled out a ton of paperwork, registered, and put on our own hospital bracelets, just like Benji’s. We went up to the third floor where the Genetics Counseling offices are. We were welcomed into a comfortable room by a woman with a warm smile and a relaxing demeanor. We sat with her, our new genetic counselor, for over two hours. She was patient, kind, informative and extremely thorough. She was clearly well educated on Lynch Syndrome and CMMRD. She explained the different genes of the Mismatch Repair set and what it meant that our family has the PMS2 variant. She had printouts and charts and screening protocols at the ready for us in individualized folders. This woman was speaking my language.

We asked her, carefully and with some reserve, about Benjamin’s diagnosis, and whether her office had ever seen families with CMMRD before. She said they currently had two such families under their care. My eyes nearly popped out of my head. I told her that the genetic counselor at All Children’s said they’d seen zero cases of this. She seemed surprised; she said that while they counsel families with CMMRD, they refer the kids to All Children’s for their medical care. She was saying (without saying) that she knew there had been families at All Children’s with CMMRD. How could the genetics department not know this? She also told me that the geneticist we’d be seeing at Moffitt had studied at the Toronto clinic we’ve been in contact with. This was a comforting piece of information.

Later, another discrepancy between the Moffitt and the All Children’s consultations came up when we asked about screening for other members of our family. The All Children’s counselor had recommended not seeking screening for our parents, because, he said, insurance wouldn’t cover the tests for people over 60, and their surveillance plans wouldn’t change anyway. Today’s counselor disagreed wholeheartedly. She recommended screening for our parents as well as our siblings once Michael and I have our official results. Should they test positive, their surveillance recommendations would absolutely change.

Michael and I agreed in the car on the drive home to direct any and all genetic consultations and questions–even for our children–to Moffitt from now on. Dr. Oshrine will still manage Benjamin’s clinical care, of course, with Dr. Tabori’s input from Toronto. We have every faith in this approach, from an oncology perspective. But we now have a new home for our genetic investigations. The genetics department at All Children’s was practically no help to us, and today we felt like every single question we had was answered.

We ended the consultation with a stack of consent forms and a saliva test (which Michael conducted far more gracefully than I did). We will get our official results within two weeks, then we’ll meet with the clinical genetics physician who will begin directing our surveillance.

On the way home, we also discussed when and how to share any of this information with our children. The answer, for now, is–we don’t. Benjamin will receive more screening. He knows that’s happening and he knows that the genetic testing we did for him has dictated that, as another measure to keep him healthy. That’s true, and that’s all that needs to be said. Banyan may also have to go this route, we don’t know yet (we made a few phone calls today to try and expedite his testing, which has still not been approved by our insurance company). But we will not jeopardize their happiness with risks and ifs and probabilities. No. Way.

Michael went back to work when we returned to Sarasota, and I went to retrieve the kids from school. I felt such joy when Banyan got in my car. He was my second school pickup and both boys were with me again. Everything felt sharper and looked more beautiful today. Tonight we went to dinner down in Venice with Michael’s family to celebrate his grandparents, who are in their 90’s. They’ve seen so many changes in their lives. But love, at the root of it, remains. I know it is the most important thing.