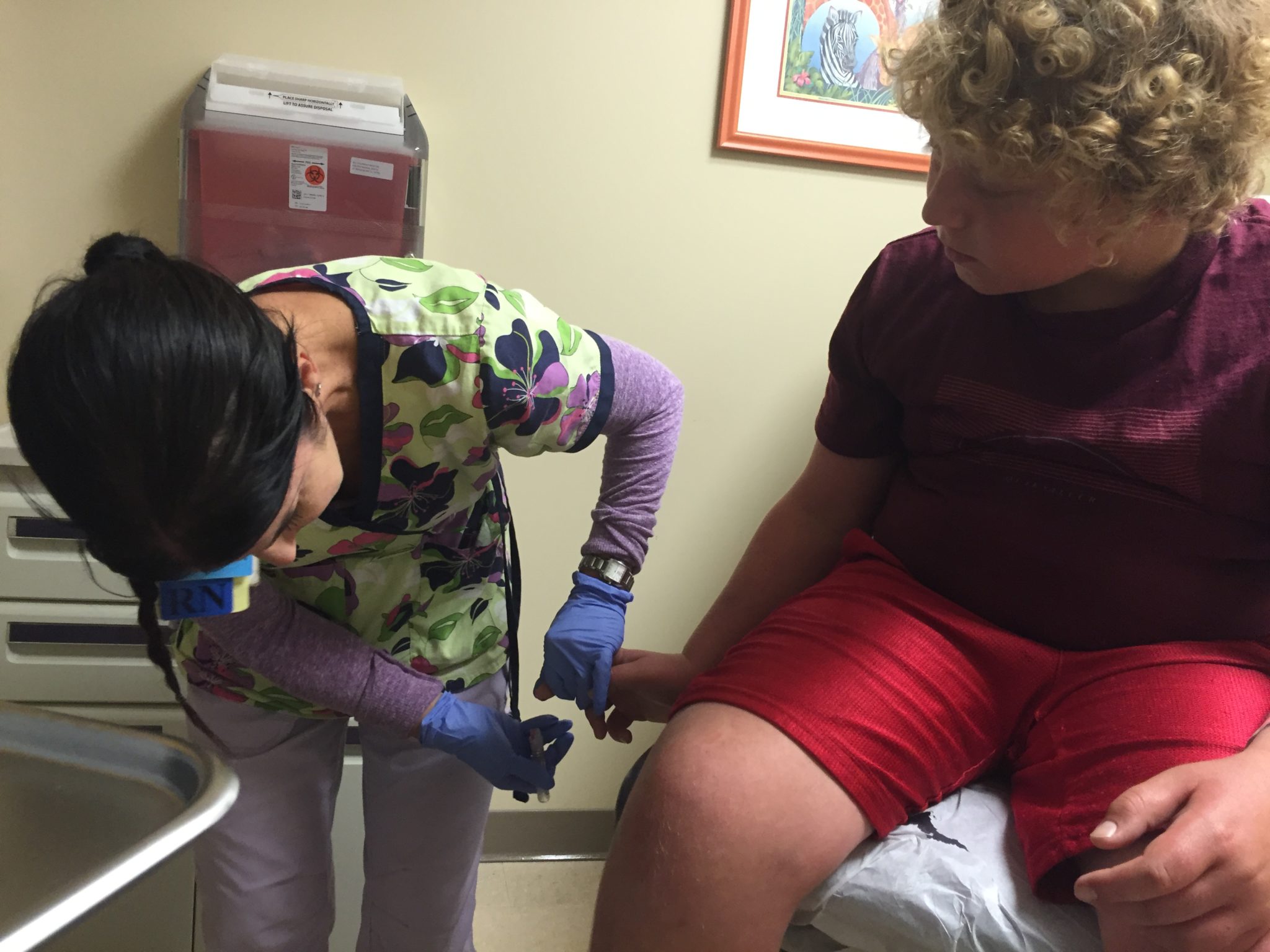 I had an alligator dream last night. I used to have them all the time; they have been the subject of a large portion of my life’s nightmares. It’s been quite a while since one has appeared. I could see last night’s monster, large and smiling, under the surface of some cloudy body of water. I was looking at this scene through thick glass. The gator was swimming toward a bank. All of a sudden my children appeared on the bank, walking closer and closer to the water’s edge, totally unaware of the alligator’s presence. I was screaming at them, but they couldn’t hear me through the glass. I woke up feeling exhausted.

Benjamin and I dropped Banyan off at the bus stop this morning and drove north over the Skyway. He asked if he was just getting a finger poke, and when I said yes, I could see the relief come over him. He didn’t ask for Kytril and he wouldn’t need it either. He was perfectly calm and content, all day long.

We waited nearly two hours to be called back to the Oncology clinic. It was a definite record. We passed the time hunting Pokemon throughout the hospital. We were told there were only three doctors there today, and no rooms available; hence the long wait. We were on Dr. Grana’s docket. When we finally went back, I was thankful to see that Krista was our nurse, one of our absolute favorites. Before we even got started with the appointment, I took out our consent forms to send Benji’s blood and our blood to Toronto. I explained to Benjamin what we were agreeing to do; even though I knew he wouldn’t have an issue with it, it is his body and his genetic information that is being studied. An eight year old has just as much of a right to consent as anyone else, and he gave his without objection. I asked Krista to please personally deliver the forms to Dr. Oshrine. I didn’t feel the need to involve Dr. Grana in the handoff. She and I hadn’t spoken about Benji’s genetic testing and I didn’t think another person in the mix was a good idea. Based on the events of the day, I think it was a wise decision.

Krista performed some impressive acrobatics while collecting Benjamin’s blood. I honestly didn’t know what to expect from the lab today. His big bruises were darker in the car this morning and there were more small ones I hadn’t noticed before. Krista sent the vial off for testing, then asked me all of the routine questions. Dr. Grana came in a few minutes later. She asked how Benji has been feeling. I told her I thought that this two week chemo break has been good for his belly. He’s been hurting much less frequently. His only complaint has been an itchy redness between his fingers that just sprang up this morning. She took a look at his hands, made a few guesses, and suggested topical Benadryl. I suspect he may be developing an allergy to his weekend Septra. It happens. We’ll see. Dr. Grana said she’d be back with the lab results, and left without mention of the recent genetic testing.

Dr. Grana never came back in to see us after the Benadryl recommendation. Krista delivered the news that Benjamin’s platelets have actually dropped, down to 32,000. His chemo will be held a little while longer. Obviously this was not what I wanted to hear. I asked Krista again and again if there were any red flags on the CBC, and there were not. His absolute neutrophil count (ANC) is strong at 2300 and his hemoglobin actually increased a tad. But those platelets are still being suppressed.

Dr. Grana told Krista to have us come back in two weeks. I was not comfortable with this suggestion. To be honest, it didn’t seem like Krista was comfortable with it either. I asked her if it was possible, since we are coming back on Friday for Benjamin’s MRI, if we can just add a CBC to the day’s lineup. We can schedule a followup from there. Krista made it happen, and I am so grateful to her. There is no way I could wait two weeks. In two weeks, Benjamin is scheduled for a lumbar puncture and two scopes. His platelets must be strong that day, or the day needs rescheduling. We need time and information to make the best decisions.

Benji and I finally left the building, grabbed lunch, and came back home in time to pick up Banyan from middle school. Banyan had football practice and Michael grilled us dinner. It was a pretty normal Monday night, which is crazy considering that the day also held consent to send our son’s blood to another country, a test revealing abnormally low platelets, a third week of chemotherapy delay, and almost four hours at the hospital.

Tomorrow Michael and I will begin our own screening process with a trip to Moffitt Cancer Center. I sent our family’s history to the genetic counselor there today, and tonight we are filling out extensive medical history questionnaires. I feel strangely calm that this is happening. I guess it’s because we are being as proactive as we possibly can. Benjamin has given us this gift.

Today, while we were waiting for lab results, I read an email from one of the twelve members of the group of CMMRD families connected by the Toronto clinic. It was from a 37 year old man who shares Benjamin’s genetic deficiency. He is a coach, a husband, a father and a three time cancer survivor. I needed to read that so desperately. I felt optimism and hope welling up in me, and it wasn’t forced. I wasn’t telling myself to believe it. I was believing it, and it felt so good.