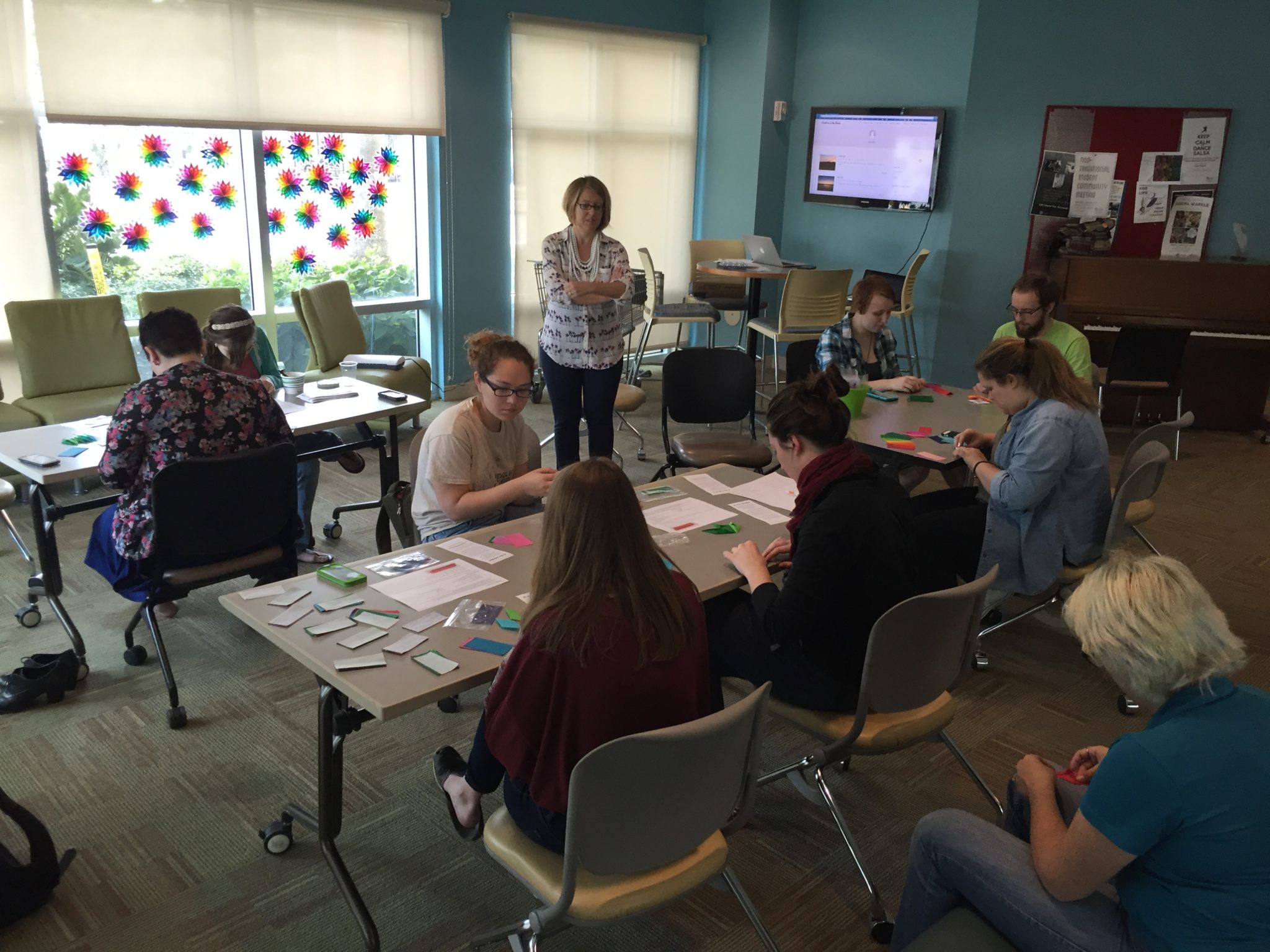 It was a gorgeous, cool purple morning as my friend and I watched the sun rise over the Ringling Bridge. Always such a beautiful way to start the day. I told Mrs. Smith that Benjamin’s side had been hurting and asked her to call me if it seemed to bother him. I checked in throughout the day but Benjamin was totally fine–he had a great day, she said. I think it was simply a side stitch from last night’s baseball game.

Banyan, however, had a little tummyache this morning. He seemed well enough to go to school, but I told him to contact me if he started to feel worse. He called me during lunch and asked me to come pick him up. As much as he has struggled through middle school, this is not a strategy he uses dishonestly. He has only missed a day because of illness this year. I came to get him.

Before the phone call, I found myself at Ringling College of Art and Design, hanging out with college students, making rainbow stars. It was the coolest thing. My friend is the director of volunteerism at the university, and she offered to provide the supplies for her students to come and make stars, both in organized groups and at their leisure around campus. I’ve already collected several stars from them. Today I was invited to introduce myself and the project. I felt such warmth from the students–and from the space, with its rainbow-star-adorned windows. I left with 28 completed stars in my possession and a very full heart.

Banyan looked so grateful to have been collected from school. I could tell he truly didn’t feel well because he passed on lunch (something that never, ever, ever happens), but as the afternoon progressed, he felt better and better. His tummyache never turned into anything more, and it subsided before Benjamin was home from school. By dinner time Banyan was back to full speed. I think the kid just needed a break.

The newest family in Sarasota to walk this path we’re on received the results of their little girl’s bone marrow aspirate today, and they were exactly the same as Benjamin’s were post-Induction: 0.03 MRD. She didn’t achieve remission and was bumped into a higher risk category. The mother messaged me to tell me the news, and her feelings about the situation echoed my own so precisely it was almost eery. I felt honored to share with her my post from the day we heard the same news last February. I will shine the light on her path, like Cody’s mom and so many others have shined the light on mine. I know what she is walking into and I want to hold her hand.

Tonight at bedtime, it almost happened. I was reading to Benjamin and scratching his back, and he was nearly asleep, when Banyan said he was hungry (another good sign he is back to himself). I shushed him, because we don’t talk about food when Benjamin can’t eat during his medicine window. His medicine! I had set it out on the counter–and forgotten it. Ironic, too, because as he was falling asleep I was running down the checklist of things I’d hoped to get accomplished tonight, which included a travel kit of medicine for a probable sleepover with his Grammy and Noni tomorrow night. I shot up out of bed and said, “Your medicine!” and Benjamin just laughed, and closed his eyes. He took his two mercaptopurine pills easily, drank an extra sip of water, and fell sweetly asleep.