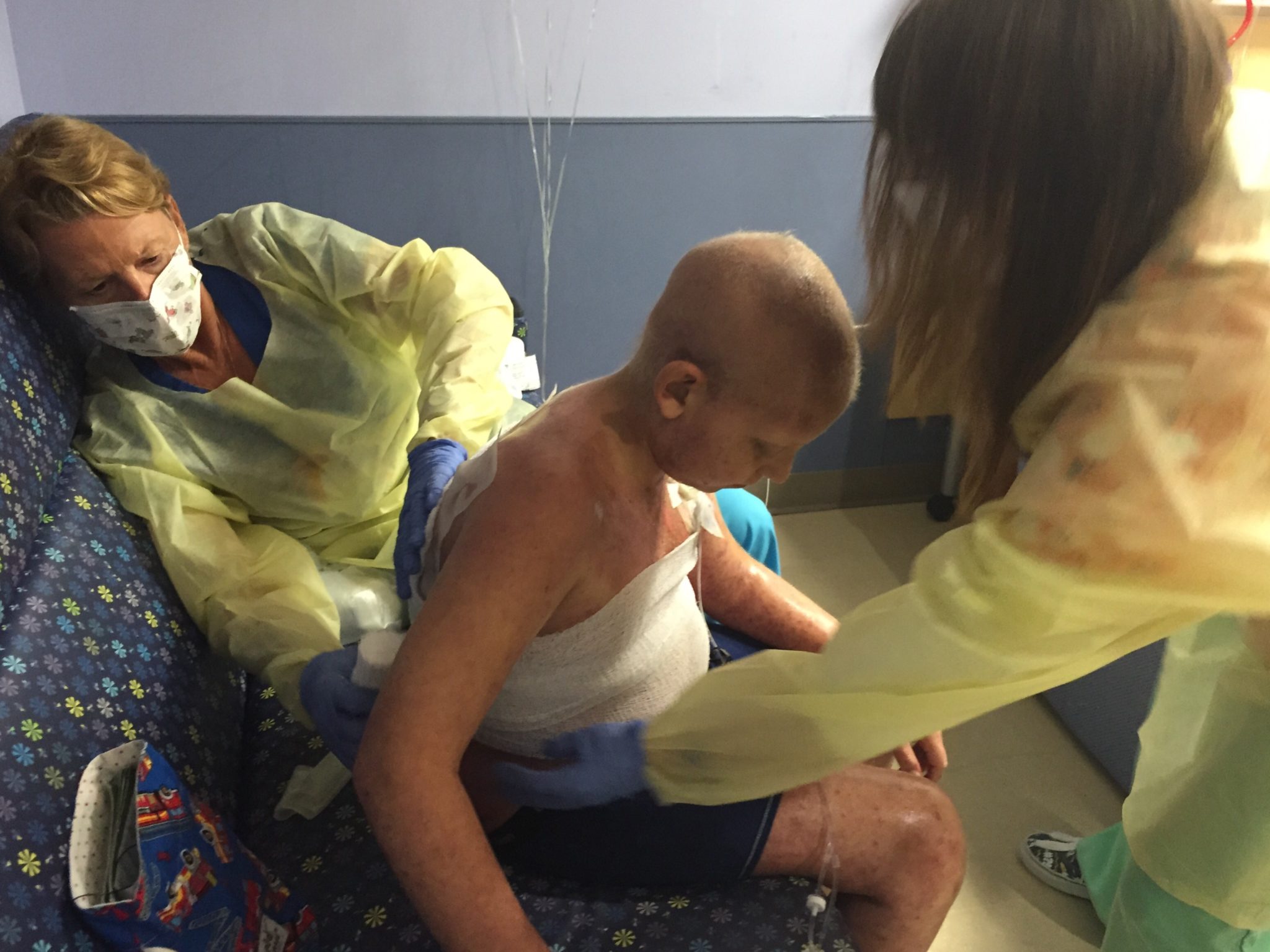 We slept well last night. For the first time in many days, Benji needed no oxygen or Tylenol during his sleeping hours. Sarah and I took this as a very good sign.

When Benji woke up and got out of bed for his morning bath, it was clear how much pain he is really in. As the toxic Methotrexate leaves his body, his skin is reacting more and more like it has been burned–because it has, from the inside. His back is the most painful. He presses his pain button over and over when he’s getting back into bed, when his back hurts the worst.

Benji’s hemoglobin remains low and he hasn’t eaten a meal in eleven days now, so his muscles are extremely weak. Walking to and from the bathtub is all he can do, and with less frequency. When it was time to get out of the warm water that is his comfort place, his body wouldn’t cooperate. It hurt to try and get up, and he didn’t want my help. I heard him whisper, “I’m brave, I’m brave, I’m brave,” before finally standing up on his wobbly legs.

Dr. Grana is our oncologist this week. I had a dream about her last night; I was walking into Rosemary Birthing Home, the place where I first heard my sons’ hearts beat, a place that is synonymous with compassionate care for me. Dr. Grana was sitting on the floor outside the closed door to a birthing room. There was a laboring woman inside.

I tried to read Dr. Grana’s face during morning rounds. There was certainly concern, sympathy, and that maternal vibe I have come to expect from her. But was there something else? Did she wish that she had tested Benji’s Methotrexate levels when she was here last weekend?

Regardless, the “Monday team” on the seventh floor was in full effect, and provided far superior care to their weekend counterparts. Dr. Grana had with her our favorite Nephrologist, GI doctor, and a new Infectious Disease doctor we really liked. Everyone seemed to be on the same page. The best news to come out of rounds this morning was no news: the two blood cultures that were drawn following the gram positive one, both from Benji’s port and peripheral blood, remain negative. Dr. Grana and the new Infectious Disease doctor both feel strongly that the sample from Saturday was contaminated, probably by bacteria on Benjamin’s skin during the draw. The subsequent samples will take another day or two to finalize, but their negative status holds now. This is, of course, an unspeakable relief.

The team decided to start Benji on a new antibiotic for gram positive bacterial coverage and discontinue the nephrotoxic Vancomycin. They also gave us some things we could try to help soothe and mobilize his shredded digestive tract. Benji’s platelets and red blood are holding steady. He still has no neutrophils to speak of. His Methotrexate level was 0.07 this morning, so Dr. Grana decided to give him a smaller dose of Leucovorin today and test his levels again tonight. His creatinine has crept up to 2.12. I really can’t wait to see that number come down, but it probably won’t until he’s off some of these medicines. The Nephrologist can’t tell us with certainty whether there will be long term damage to Benji’s kidneys. I’m visualizing a complete recovery, of course.

Michael took the day off today, and arrived during rounds equipped with cheese grits. We thought they might appeal to Benji. They did not. We tried many things throughout the day; meal replacement shakes from Kathy, bites of food we have here, another Aunt Sarah trip to Panera for broth and bread, a run to the cafeteria for Michael to get mashed potatoes. Nothing worked. Benji did show interest in food today, but his body chose sleep instead. He took three huge naps.

Between Benji’s naps we were visited by the skin team and by a physical therapist, both brought in to see if they could help Benji feel more comfortable, and a little stronger. I know that time, rest and food will help. Sarah left today to return to her family in Gainesville after four nights. We researched together, tag teamed Benji’s care without needing many words, and formulated plans of action and diplomacy within these walls. I don’t know if I’ve ever been so grateful to have a twin.

When Benji woke up tonight from his third nap, he was in immediate, severe pain. He pressed his PCA button immediately. Michael and I knew we needed to help him find some relief, but he could hardly get up. We explained to him what we wanted to do: put Aquafor all over his burning skin, then have the nurses wrap his torso in nonadherent strips, gauze and tubular dressing. This is a technique that several folks on the skin team have suggested. It would also help keep the tenuous dressing around his port held in place.

In a feat of miraculous strength and determination, Benji allowed Michael and me to help his skin heal. We put on gloves and coated his burns. He pushed through his pain and walked from the bed to the couch. Michael put fresh linens on Benji’s bed while I watched the nurses begin the process of wrapping our boy. I know how badly it must have hurt him to have his skin touched so much. He is the bravest person I’ve ever known and I can’t believe I have the honor of being his mama.

When Benji returned to bed, he pressed his pain button and went straight back to sleep. He is very comfortable now. I am listening to the sounds of his breathing, and sending love to the baby who is crying alone in the room next door.

The results of Benji’s nighttime labs have come back in, and today’s Leucovorin only brought his Methotrexate level down to 0.06. Even though patients are often discharged with levels of 0.08 or below, I want that number to be 0.00. Any level in his body eleven days after treatment is surely causing these toxic manifestations to continue. The Leucovorin will remain on the IV pole tonight, and his levels will be checked again in the morning.

This is now our longest stay on the seventh floor. I spent some time today getting Benji’s Beads of Courage up to date so that I can hang them in our room. We have unpacked the many tote bags that were on the floor and our clothes are now folded in cabinets. Upon Sarah’s sweet suggestion I have made a calendar for the room, and I’m planning some autumn craftiness to help us both appreciate the passage of time while we’re here. Benji’s classmates have made cards and a banner and are sending them our way. This will be our home for a while, and we will fill it with healing and love.