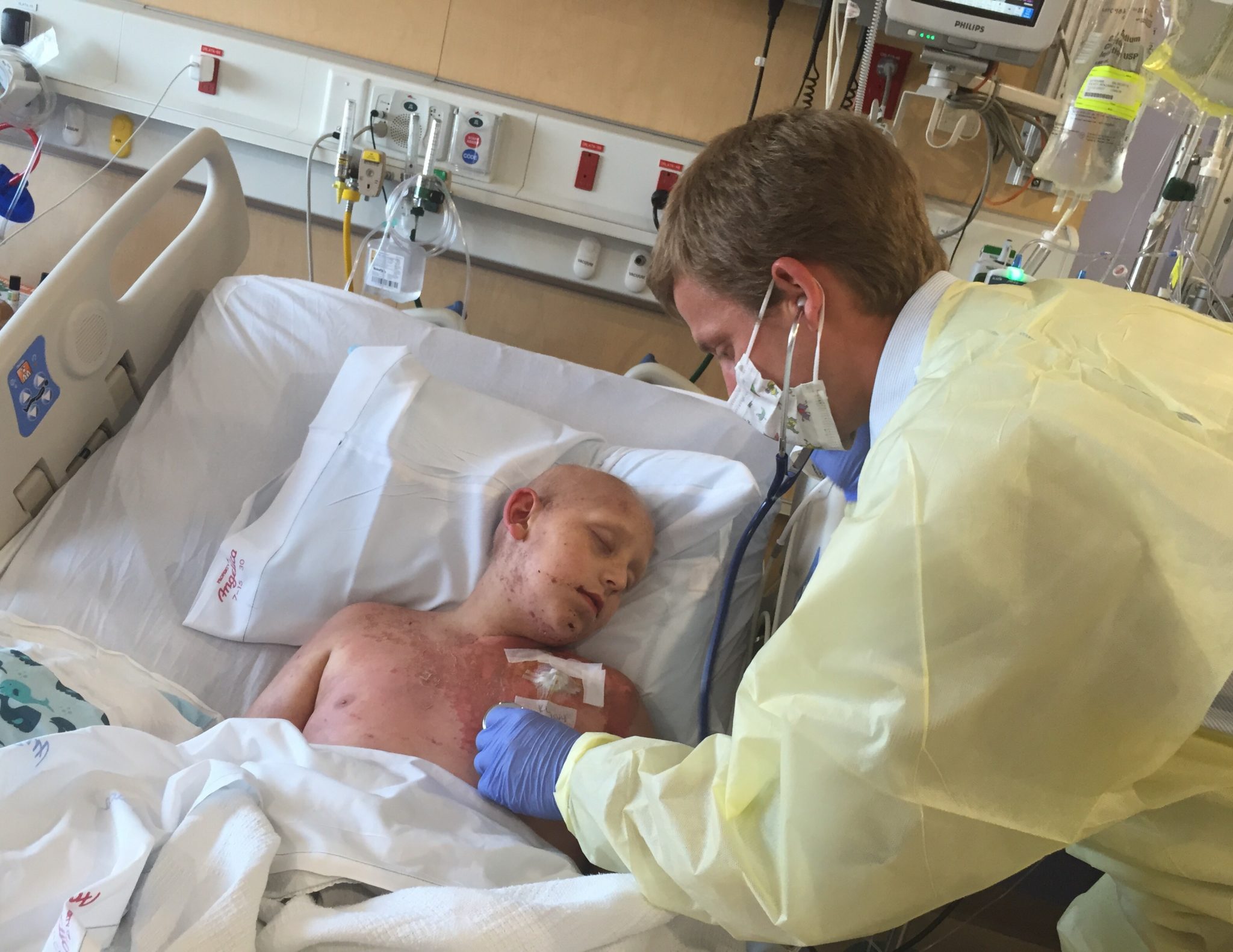 I couldn’t fall asleep last night. I was reviewing the events of the past ten days, and my anger was mounting. I thought about all of the tests and procedures that Benji has gone through unnecessarily. I thought about all of the moments that eroded our confidence. I lingered on the “what if’s” for too long; what if Benji’s Methotrexate levels had been tested the day we arrived in the Emergency Room? So much could have been avoided.

This was not a productive use of my time, clearly. Instead I made a list of action steps I need to see moving forward. I went over in my mind how to speak kindly and assertively about what I feel needs to happen, while keeping the events of the past week squarely in everyone’s awareness. With that accomplished, I fell asleep rather easily.

I dreamed that Michael and I were hiking in rocky terrain. He looked in a crevice and saw a snake. We examined it closer. We had to really study its markings to discern that it was an Eastern Diamondback, because it looked like it was covered in a layer of grayish dust.

Benji woke up in the middle of the night with an urgent bathroom emergency. While we were awake, he noticed that his new port dressing was coming loose. He showed it to me, and I could see the needle. I called the nurse, knowing it would have to be redressed. She brought in backup. The team created their sterile fields and discussed how they would remove the rest of the dressing from Benji’s tender skin. They were very careful, but his raw chest was pulled and rubbed with stinging Betadyne, and it hurt. Redressing with new adhesive was no walk in the park either. Benji’s eyes were open and awake, but as far away as possible. He gathers his strength from a powerful source.

Benji’s morning labs showed that he would need both platelet and red blood cell transfusions today. His creatinine and Methotrexate levels inched downward. All blood cultures subsequent to the positive one from the weekend remain negative.

I asked our morning nurse when Dr. Grana and her team were making rounds. I was told they were having seated rounds today but that she’d be by to see us soon. I asked our nurse to pass along a few concerns from my list, most importantly, my request to see an ophthalmologist. Methotrexate toxicity falls along the same continuum as Stevens Johnson Syndrome; in fact, the dermatologist who visited Sunday night said that Benji meets its clinical parameters. It affects the mucous membranes, including the eyelids. Since all of Benji’s other mucous membranes are wounded, we want an ophthalmologist to examine his eyes and be sure they are staying safe through this detoxification process.

Our nurse took our request to the ARNP with whom we have had so much friction during this stay. Her response, delivered to me by our nurse, was that we didn’t need an ophthalmologist because Benji doesn’t have Stevens Johnson Syndrome.

I think this was a pivotal moment for me. I channeled my anger and kindly communicated to Benji’s nurse that this was unacceptable. I needed to see Dr. Grana and I needed the opthalmology consult. I also needed to address many other concerns. All of the words I’d saved for morning rounds were heard by our nurse, and she took them with her as she left our room.

Benji’s middle-of-the-night port dressing only lasted a few hours. A tiny fold had formed on one side that allowed air to get through to the needle. For the second time this morning, and the third time in as many days, Benji lay still and patient while his body was touched so uncomfortably. So far, this third new dressing is the winner. I hope it sticks (literally) for a few more days.

Michael arrived during the redressing process and held Benji’s hand as he withstood the pain. After the nurses left the room, Michael showed Benji the provisions he’d brought for us, each more thoughtful than the last. Benji tried one bite of soup, one bite of pureed apples and half of a grape. Teeny tiny baby steps.

We had a quick visit from our Nephrologist, who gave us assurances on some of Benji’s new medicines. Infectious Disease was the next team to visit. They discontinued one of Benji’s antibiotics. This was good news for his kidneys as well as the timing of the day; blood products must enter his body alone, and with all of the other medicines set to run on his IV pole, the nurses were concerned they’d have to run a peripheral IV line from his arm. I wanted to avoid this. With the one less antibiotic, everything just barely fit into place.

Alone at last, Michael and I put on some music for Benji and cleaned the room, adding more cards and banners from home to the walls. We put fresh sheets on Benji’s bed and he walked to the couch. This was a big step. The morning light surrounded his beautiful face. He returned to bed when the nurses brought his platelets, and took a nice long nap.

Kathy brought us another delicious meal at lunchtime. The hours were ticking by, and still, we hadn’t seen an oncologist. Michael went out in the hall and came back in with a big smile. “You’re going to be very happy,” he said. Right behind him was Dr. Oshrine. He was taking over Benji’s care.

The relief and gratitude we felt–and I can speak for Michael too–changed the energy in the room monumentally. Dr. Oshrine spent so much time with us. He explained things in a way that no one else can. He discussed absolutely every element of Benji’s care, from head to toe. We had so many questions and concerns and he addressed every one. He listened. He heard us. It was quite emotional for me; when Dr. Oshrine was preparing to examine Benji, I gave Michael a long hug. He was emotional too. He told Dr. Oshrine that he may have saved Benji’s life. We don’t take it lightly. When he examined Benji, he warmed his stethoscope before putting it on Benji’s tender chest. He closed the blinds when Benji stood naked. We respect him, and he respects our boy.

Dr. Oshrine said many things that stuck with me. He said that the silver lining in this unfortunate cloud is that Benji received more Methotrexate than he was ever supposed to, so from a leukemia standpoint, he is well equipped to miss his last two scheduled doses if that’s what the team decides. Upon examining Benji, he compared him to a snake shedding his skin. I thought this was beautiful and remembered my dream. He said that this is the time that healing will begin.

Benji decided to walk to the couch again as Dr. Oshrine was leaving. His doctor was very happy to see it. The skin team came in next to discuss Benji’s molting back. He walked into the bathtub, and I bathed him gently. I gave him the supplies to clean his mouth. He felt stronger today.

Benji was tired then, and in pain from more self-motivated movement than he’d had in days. He was ready for a nap. Soon, his red blood transfusion began. Michael rested on the couch while I cut autumn leaves out of construction paper to make a garland for the room. I felt happy for the first time in so many days.

Kathy left to stay with Banyan while he tackled homework, and Gana came for a visit this afternoon. While she was here, Benji took another bath, and got into bed twice without pressing his pain button. I thought this was huge.

Dr. Oshrine put Benji on two new medicines; one to lower his blood pressure, which has been high since his kidney injury, and one to stimulate the bone marrow to generate cell growth. Benji’s TPN also came with lipids tonight, which is hung in a separate bag. He had to have an additional pump and plug attached to his IV pole. It’s now a double decker.

After everyone left for the evening, Benji’s second bag of packed red blood cells began dripping into his veins. I wondered briefly who donated it, and gave thanks. As the two hour transfusion ticked along, Benji’s pain got worse and worse. It became unbearable. He was shaking badly and vomiting mucous. He was miserable and cold. His fever was rising. Finally the nurse removed the blood line and hooked him back up to his other medicines, including his PCA. Benji was so relieved to press his button. I could not stop the tears.

Just as I was settling in for bed, our nurse told me that an ophthalmologist will be in to see Benji tomorrow. Dr. Oshrine requested the consult. I feel like the corner we’ve been searching for is here. Benji is still hurting badly, and we have so much work to do to heal his body and spirit. But we are finally on the path. This is the time that healing can begin.