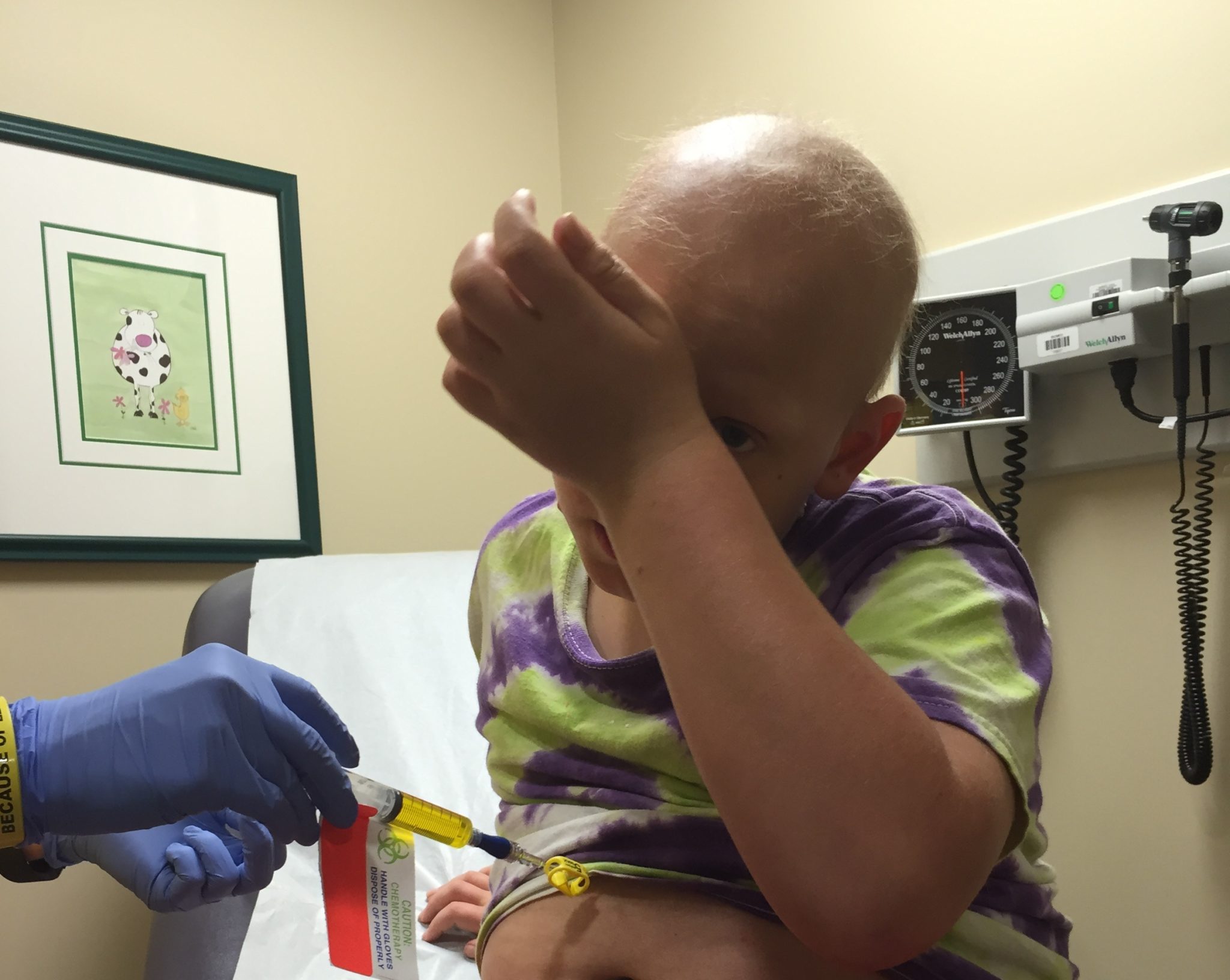 I was filled with a sense of optimism today. We have overcome last week’s obstacle, and maybe it will be the final one during this phase. Maybe we are really on the homestretch of this frontline of treatment. My optimism was threatened several times, and still is, as I am going on hour four trying to help my restless, achy Benji get to sleep. But I am determined not to let the hopeful feeling waver. I think it could carry us through.

We dropped Banyan off at middle school this morning and stopped in the parking lot to apply numbing cream to Benji’s port and place a Scopolamine patch behind his ear. We downloaded a new audiobook and hit the road. There was just a hint of fall in the air today, which had us both a little giddy. A new season is coming.

We waited much longer than usual in the clinic today. I could tell it was a crazy morning on the oncology floor; the nurses were running way behind, so when Benji was finally called back, I knew they’d be in a hurry. This is when Benji began stalling. He stalled putting on his allergy bracelet, insisting on doing it himself. He stalled getting his height measured. He stalled walking to the exam room. He stalled when the nurse asked him to remove his shirt.

Finally, when it was time to put on our masks so that he could be accessed, I could tell Benji was nervous. He was staring at her table, carefully arranged with the familiar collection of sterile objects. I distracted him with one of our hospital games, “Read My Lips Behind The Mask.” I started to go first, then he said, “Wait! I’ll go.” Of course I couldn’t tell what words his mouth was forming silently–that’s the fun of the game. I guessed something ridiculous, and he said, “Want me to tell you?” I said sure. He said, “I said, ‘I don’t want to get accessed.'”

His honesty was so pure. There was no complaint, no whine. He was stating a fact, behind the safety of a silly mask game. (Maybe the Child Life Specialists are onto something.) I reminded him that accessing today meant one less time he’d have to be accessed in the future. And since we decided he’d stay accessed until tomorrow, it’s one less time this week, too. He used his oils, he held my hand, and he did what he does so often, so well.

A little while later, Dr. Oshrine entered the room. We were both relieved to see him. We filled him in on last week’s roller coaster (though of course he already knew), and talked about how the delay would affect the remainder of this phase. For the third time in as many weeks, Benji’s treatment calendar was redrawn. I told Dr. Oshrine what Dr. Hale had said last week; that we should get the “Attendance Award” for the Clinic, we’re there so frequently these days. We laughed, but as I looked at the calendars for October and November, I was acutely aware that very soon I won’t have the strange comfort of three clinic visits a week. Things will return to some new kind of normal, and we will have to reach a new level of trust. A monthly level, not a weekly one. This is where the optimism must prevail.

We passed the time making trick shots into the trash can with Benji’s paper airplane, listening to music and playing UNO. Dr. Oshrine returned with Benji’s counts: his platelets and hemoglobin are great, and his absolute neutrophil count (ANC) is back down below 1000. Even though this means he’s neutropenic, it makes me much more comfortable than last week’s inflated numbers. It means he’s not fighting infection. Benji’s liver numbers have risen again slightly, so I made a note to return to milk thistle tonight.

Dr. Oshrine ordered Benji’s chemo, and our nurse told us it would probably take an hour or so to arrive from pharmacy. I took Benji to lunch downstairs in the cafeteria. We had a lovely time. When we returned, his medicine was ready. The Vincristine didn’t bother Benji much; it never has. But when he saw the syringe filled with neon yellow Methotrexate that would follow, he grew fearful. He could see that it held more than his last dose; it escalated from 150mg to 225mg today. He has never taken Methotrexate intravenously without vomiting. I reminded him that he was wearing his patch, and he had taken Kytril. That we have Marinol at home if we need it. And you’re stronger than the medicine. I told him to use his oils through the slow push of chemo into his line. He did, breathing deeply. For the first time, he did not vomit after Methotrexate. I think he felt empowered. I know he felt relieved.

His tummy did hurt tonight though; pain, not nausea. He didn’t understand why. I reminded him that even though he didn’t throw up this afternoon, he absorbed a lot of medicine. It’s moving through his body now. He was so restless.

As I’ve typed this on my phone, Benji has finally fallen asleep. It was the Sleepy Drive that did it. We took one about an hour ago. When Benji was a baby and had a hard time falling asleep, I’d put him in his car seat, turn on All Night Jazz on NPR, and drive over the Ringling Bridge and back. It worked every time, and it worked tonight. He groggily walked back into the house after our drive and settled into bed next to me, breathing deeply, pain free.

That’s what we do, Benji and me. We drive over bridges until he feels better.