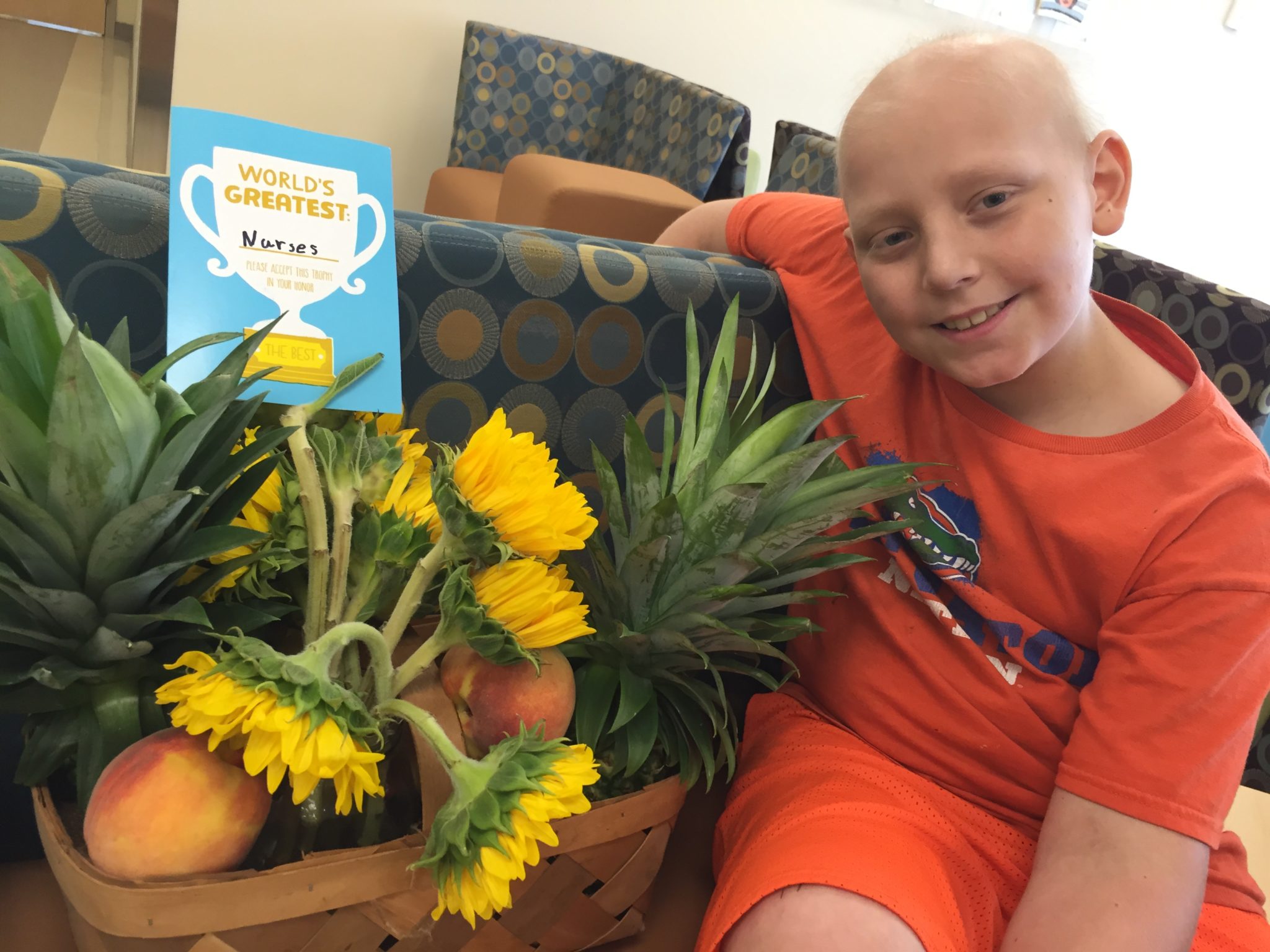 Benji decided not to go to school this morning. His tummy hurt, and I didn’t want to push it. We fed Banyan and wished him well, then sent him off to middle school. Michael stayed home sick today, which never happens. So we made him some chicken soup and tea–Benji enjoyed taking care of him–and we headed north before lunchtime.

Today was our last appointment in the Infusion Center during the month of September, which is Childhood Cancer Awareness Month. To celebrate, we picked up a collection of sweet, golden things for our favorite nurses and put them together in a basket. We chose chocolates wrapped in gold, sunflowers, peaches and pineapples. Benjamin was so proud to bring the basket to the women who have cared for him so well these many months.

Benji’s orders didn’t require a complete blood count today, nor a consultation with the oncologist. All we had to do was wait for his chemotherapy to be sent up from pharmacy. We didn’t stick around our bay; instead we had another epic paper airplane battle, and spent time playing games with the nurses. When Benji’s Erwinia shots were ready he wasn’t a bit nervous. He took his numbing cream off confidently and wiped the pale circles on his legs with gauze, readying the areas for the nurses. They took their places, I held his hand, and he relaxed. That zen look came over him. The needles went in, and his eyes widened immediately. The tears came quick. The shots hurt worse than they ever have, and he cried well into our third lap around the floor.

This reaction doesn’t happen often, but when it does, I feel so angry. Like Benjamin was betrayed. It takes such strength and presence for him to achieve that state of mind, and when it doesn’t work, it just isn’t fair. I am so grateful that he has three weeks before his final round of shots. Just twelve left, one in each leg during six October days. That’s it. After sixty, that doesn’t sound so bad.

We waited our hour for monitoring. Soon, Benji’s legs had recovered and he took his place behind the nurses’ station, joking with them and regaining control of his surroundings. He was deaccessed just before 4pm, and he’ll stay that way until next Thursday, when his next doses of escalating Methotrexate and Vincristine are due.

On the way home, I put on music we both love, Benji fell asleep, and I let go. There are feelings swirled into this transition into long term maintenance that are really hard to articulate. The enormity of what our little boy has endured, mixed with the liberation of days on end of home life in our future, and the uncertainty that lies on the flip side of that coin–it’s a lot. And there are so many months in this next chapter. I have hope in my chest and my faith in Benji’s health is unwavering. I just find myself having to take a lot of deep breaths right now.

These next eight days will be a good trial run for the spans of time that will increase between clinic visits as the weather cools. We’ve had a break like this before, but it carried with it a much different set of emotions. This is new territory. I choose to breathe out fear, and breathe in gratitude for the enormous leap we have made.