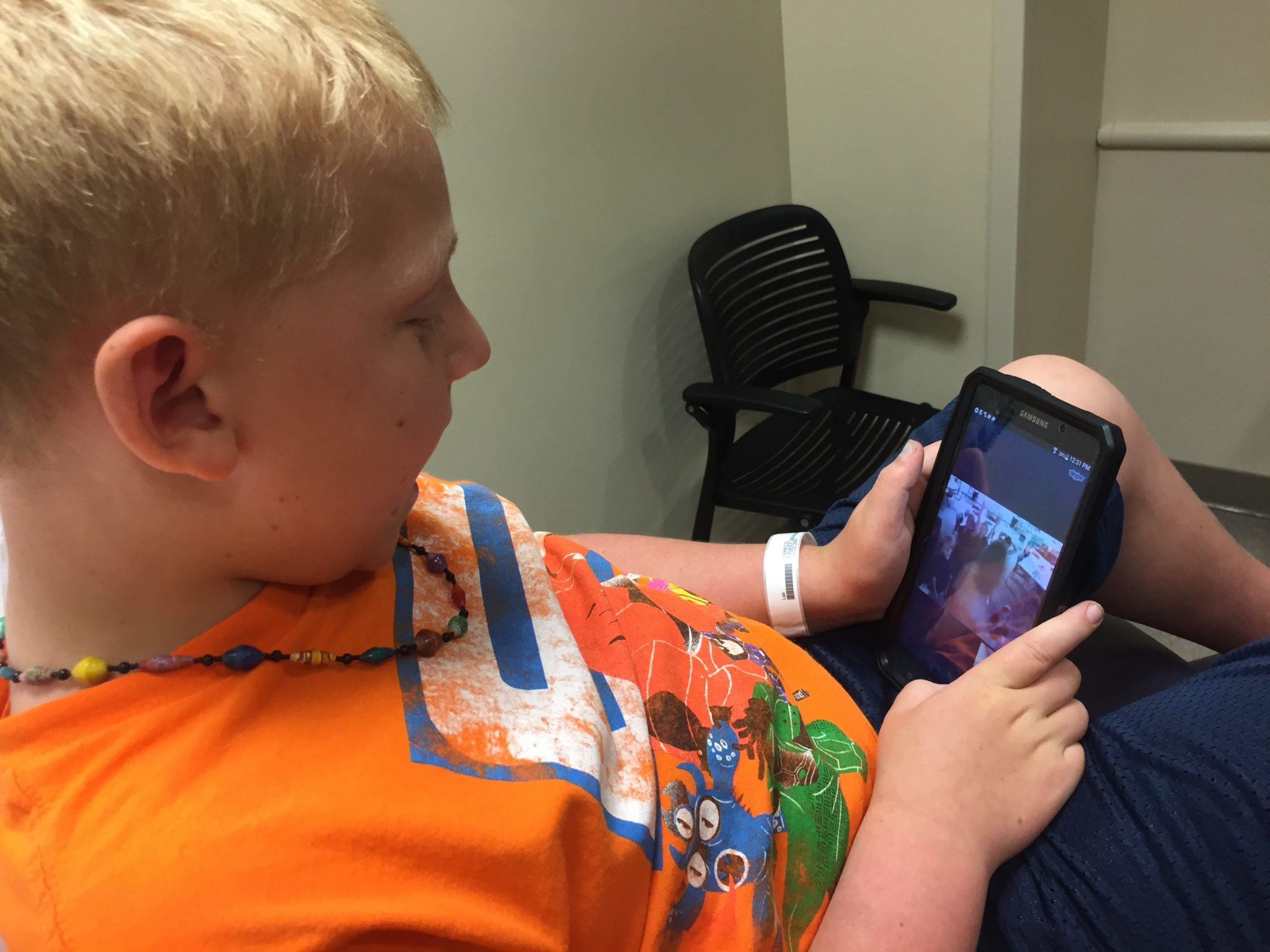 “NAUSEA!” was my alarm clock this morning just after 6am. Benji woke up with urgency, and we didn’t make it to the Zofran in time. He took the medicine afterward with a nice hot bath. The combination worked immediately.

Benjamin’s body is getting used to tolerating this heavy medicine again. By the time we got into the exam room at All Children’s for his appointment at 11:30, his tummy was hurting, and the nausea had returned. Doses of Zofran can’t be closer than six hours apart. I was watching the clock. When the nurses were ready to administer his Cytarabine, it had been almost exactly six hours, and he got his second dose of Zofran for the day.

Dr. Grana thought the nausea was more likely from yesterday’s Cyclophosphamide than the Cytarabine. She recommended a third prophylactic dose of Zofran tonight before bedtime. We’ll give that to him with his 6MP and his nightly mouthwash, and hope for an easier wake up tomorrow.

While we were waiting for Benji’s chemo to arrive, we used the HopeCam connection to Skype with his classmates. The reception wasn’t the greatest but it was nice to hear their voices, and to show them the exam room where Benji gets his chemotherapy. We’re hoping to try again later in the week.

Benji slept on the car ride home. We pulled up just minutes before Mrs. West arrived for her weekly visit. Today was the last day of the third quarter at Southside Elementary, and I am extremely proud to say that Benjamin has completed all assignments for the quarter. He is on track with his peers, and on or above his benchmarks in all areas. I know how hard it is for him to focus with the distractions of home and hospital. I think his commitment deserves recognition. I’ll conjur up something special to celebrate his dedication.

As we look ahead, we are taking care of everyone’s immunity in the house, especially Benjamin’s (of course). We are on top of every little cut and scrape with Neosporin immediately. Lots of chapstick on dry lips. Constant handwashing. We’ve cancelled or said “no thank you” to commitments that put any of us in crowded rooms next week. Benji will get some immune boosting goodness each morning, and I’ll take it right along with him.

A traffic sign I’d never noticed before told me to “Expect the Unexpected” today. That could be our mantra for the year. We know we should “expect” another hospital stay, but my goal is to postpone it for as long as we possibly can. Even though we’re at the hospital almost daily these four weeks, it’s not the same as being admitted. Each day, for now, we get to come home. Each day’s homecoming is a special gift, an exhale, a moment of thanksgiving. We don’t take it for granted.