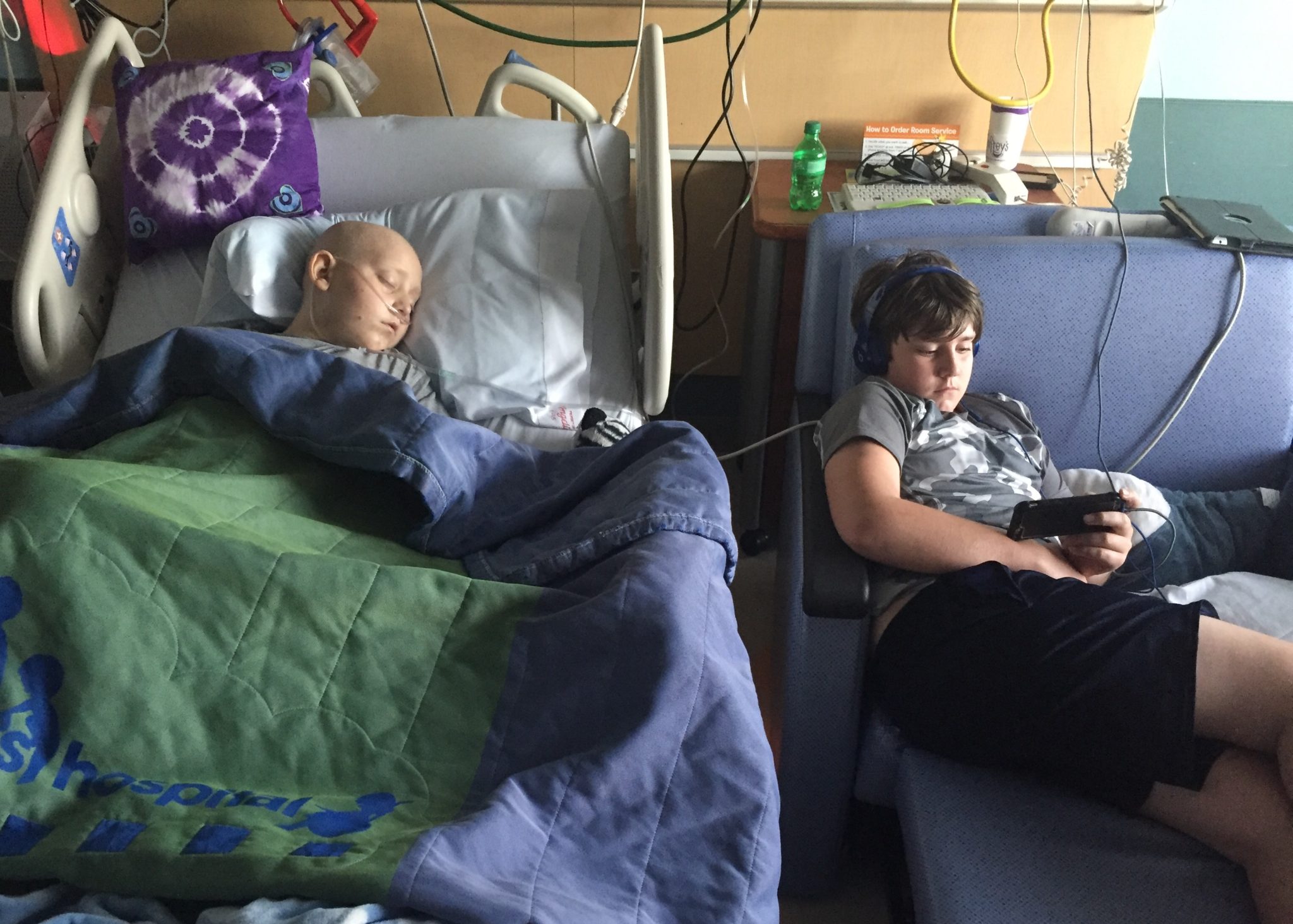 We’re back on the seventh floor. It’s where we need to be right now. I’ve felt terrified, angry, guilty, relieved, and grateful today. Sitting here to write this feels exhausting, but these are just words. Benjamin has shown me what true resilience is.

The sky was cotton candy pink this morning as we left for St. Petersburg. A beautiful color. Benjamin took his Kytril, his chest was numb, and he slept with a heat pack on his belly as we crossed the Skyway. I think the first time my stomach sank today was when we walked into the clinic waiting room. So many times before I’ve checked in and seen children whose skin was a color I knew was unhealthy. I always gave thanks that that color did not belong to Benjamin. Today, in that waiting room, it did. Our child was that color. Not possible.

Sarah was our nurse in clinic today. She’s one of the nurses we’ve known since diagnosis and I was relieved to see her. I knew accessing would go well and she would expedite things as much as possible. Benjamin took a little time to find his peace, which was understandable given the amount of pain he was in. But he finally got there. He always does. And Sarah was successful on the first try.

Our appointment was with a physician’s assistant today. We expected to get counts, maybe get a dose of platelets, and head down to surgery. Instead, the PA came in with a sheet of paper and a serious expression on her face. She said that Benjamin’s platelets were at 11,000 and his hemoglobin was at 6.9, so he’d be getting transfusions of both today. She said that his uric acid looked good, his creatinine was a little high–I could tell she was reserving the crux of the matter. Finally she told us that Benjamin’s white blood cell count had risen to 41,000 since Thursday.

41,000. That’s more than double what it was when he was diagnosed two years ago. After all this time and treatment, Benjamin has more leukemia in his body than he ever has.

The PA said that Benjamin’s lumbar puncture would be postponed until at least tomorrow. She went on to say that when a person’s white count is this high, the danger in beginning chemotherapy is developing tumor lysis syndrome. This happens when an excess of cells are killed and deposited into the bloodstream, causing dangerous imbalances. I was nodding, I was familiar with the phrase, but my stomach was sinking for the second time and my face was burning up. She said that because of the imbalances that can occur, Benjamin would need to be closely monitored, and management medicines would need to be available. So he’d be admitted to 7 South and intravenous chemotherapy would begin today instead of tomorrow. I was so relieved. For a moment I thought she might tell us it was too dangerous to give him chemo. Then what.

Michael shared my relief–clearly Benjamin needed treatment as soon as possible–but the relief soon turned to anger. He articulated it immediately. If Benjamin’s blood sample hadn’t been lost the first time around, we would have heard from NIH sooner than Friday, and perhaps Benji would have started outpatient chemotherapy last week. OR, if we hadn’t been sent home Thursday, and instead been admitted over the weekend, perhaps this spike could have been prevented. All of this is hindsight of course, but it was hard not to be frustrated. For me, it was hard not to second guess my decisions.

While we waited for the paperwork to head upstairs, Michael sprang into action, gathering a list of things Benjamin and I would need from the house and driving back to Sarasota to gather them. Banyan stayed with me to keep Benjamin entertained, and did so beautifully. The boys and I walked from the clinic across the pedestrian bridge to the elevators to 7 South. It was a monumental effort on Benjamin’s part, but he made it, and opened the double doors to the floor like he owned the place.

We have a nice view in our new room. The nurses here know Benji’s list of requirements by now: bathtub, south facing windows, close to the nurse’s station. Check, check, check. Our nurse had platelets ready for Benjamin almost immediately, per the PA’s orders. First she drew a type and screen so he’d be ready for his blood transfusion later. Midway through the platelets I realized I had not been on top of my game so far today. Benjamin should have had the type and screen done in the clinic when he was accessed, and the platelets should have been delayed, as he was above the transfusion parameter and we postponed his lumbar puncture. It was a wake up call. The numbers shook me this morning but now is not the time to lose vigilance. I began a long list of questions for the doctors at morning rounds tomorrow, and for Dr. Oshrine, should we see him.

Fortunately, our nurse was well on top of her game, and she masterfully scheduled the platelets, red blood transfusion, heavy hydration, and two rounds of chemotherapy so that Benjamin would get treatment as quickly as possible. I was so grateful for her. While most of this was happening, Benjamin was deeply sleeping. He was sweating profusely. Disease progression, they told me. I felt myself losing a little control and pulled Banyan up from his comfortable recliner for a hug. His arms wrap around my shoulders now, and mine around his waist. He told me everything would be okay. I know, I said.

Michael returned with two wagonloads, which Banyan went down to help him carry upstairs. He brought everything I asked for and then some, including my yoga mat, which is essential. He is the most incredible partner. His word of the year was so fitting: strength. I rely on it and find solace in it. By 2pm we were unpacked and settled in. I was glad Michael was here when the Etoposide began dripping. Cyclophosphamide immediately followed. Go swiftly and do your work, medicine. Leave without harm.

Benji’s oxygen levels dipped a little too low for a little too long during his chemotherapy, so our nurse put him on a liter of oxygen through those little tubes in his nose. I was relieved. Usually I am the one asking the nurses to hold off on the oxygen. He sleeps deeply, it’ll come right back up–and it always does. Today, it wasn’t coming right back up, even with a change of position. We knew he needed some help. Our nurse practitioner thought that it was a result of Benji’s low hemoglobin, and that once the chemo was over and he could get his red blood transfusion, he’d be just fine. He was.

When Benjamin woke up he felt okay for a little while, then his belly started to hurt him again, badly. He said it wasn’t pain exactly, and it wasn’t nausea, it was just everything. He was so uncomfortable. I felt his spleen. It is remarkable how large it is. I know it is putting pressure on everything in his body. He didn’t eat, but he drank pretty well. Hot baths were his most reliable source of relief, and he probably took a dozen of them.

During one bath, Benjamin looked at me sadly, and said, “Everything would just be better if we were home.” We will be soon, and it will be wonderful. But right now, we need to get you feeling better. Right now, we are right where we need to be.