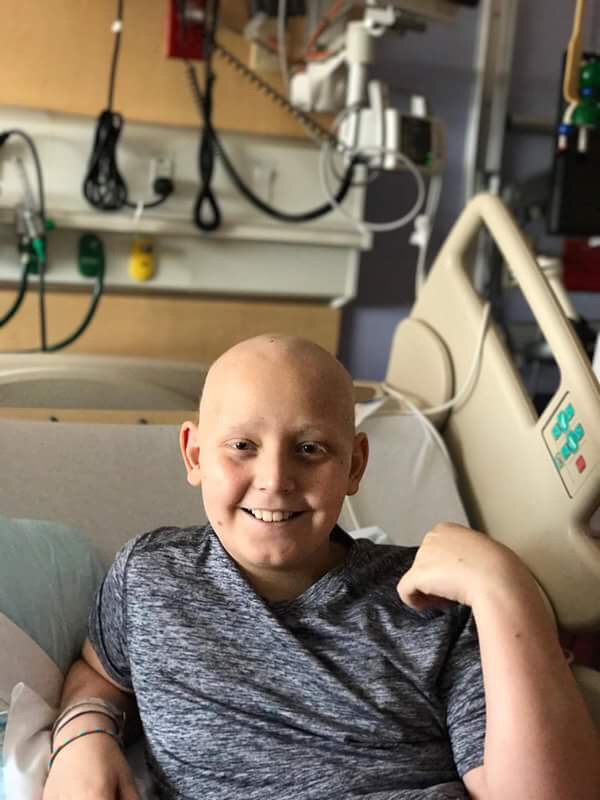 Benji woke up before the sun in horrible pain. I wondered what was happening; he felt so much better yesterday! He begged for a bath, but declined pain medicine. The bath made him feel better. When he got out, he vomited. I called our nurse and asked for his Kytril early, then got him comfortably back to sleep. I stayed awake for shift change, then joined my boy for several hours of needed rest.

Shift change was rewarding. Benjamin’s numbers continue to trend in the right direction, albeit slowly. His white cell count stayed about the same, but his blast percentage went down to 53%. His platelet transfusion wasn’t sustained, but he didn’t need a transfusion either. Things felt very stable this morning.

Aside from Benjamin’s sunrise episode, his pain was well managed today. He used plenty of heat packs and took baths every couple of hours, and these tools worked to keep him happy. We completed more school work, including a reading test, which he aced. We were visited by Christmas carolers as well as the rookie squad from the Tampa Bay Buccaneers. Benji walked to the end of the hall and back, moving his legs more than he has since his apheresis catheter was placed. In the evening, Kathy and Gana came to visit and shared lots of laughs with my sweet boy.

Unfortunately, Benjamin hardly ate a thing today. Things he thought he wanted revolted him when they arrived. His pain returned tonight, and it seemed concomitant with his antibiotic infusion. He asked for a bath, and said that he felt nauseous because he thought he could taste the antibiotic. He has been on consistent Cefepime for weeks. I’m sure it is wrecking his gut. These days with little to no food can only be exacerbating the situation. I know Benji’s neutrophil count has been fluctuating, but I am going to ask during rounds tomorrow if he can have a break from antibiotics, or at least some lower parameters. I think his gut needs it.

We missed Michael and Banyan today. They had to stay in Sarasota and focus on a project Banyan has due this week. Michael is helping him with his tri-fold display board, something that has exclusively fallen into my parenting zone until now. We both wish that things were different tonight, that I was worrying about glue sticks and typos instead of nausea and platelets. We are doing this together. I am so thankful to have such a solid partnership.

Tomorrow, Benjamin will receive his second dose of Inotuzumab. The other patient who is receiving it will be coming to the outpatient clinic for her dose. This tells me her numbers are more stable than Benjamin’s. The pharmacy will begin the process of mixing the medicine for both patients when the girl arrives in the clinic. They have to constitute it in a completely dark environment, and it has to be administered within four hours. Benji will be premedicated again with Benadryl, Hydrocortisone and Tylenol. I am anticipating a platelet transfusion as well, not only because of today’s numbers, but because during one of his baths today, blood backed up into his central line.

The news that our sweet friends received yesterday is unbearable and doesn’t seem real. Teams of people were in and out of their room today, making preparations to send them home. Benjamin felt the energy. People he knows are crying in the halls. He asked one nurse why her eyes were red, and she said it was because she had to deliver bad news. He knew which patient she was talking about. He has asked about this little girl so many times. I have somehow known the words to say and I pray that this guidance continues.

The connection we have with these families up here is indescribable. A teenage boy Benjamin adores came to visit the girl’s family and also to give us hugs. He is also a patient here. He took a beautiful picture of Benji before he left. I love seeing my boy the way this friend sees him. When they left, we hugged for a long time. When I hugged the girl’s mother I did not want to let her go. Sometimes I know the words to say. Sometimes there are no words needed.