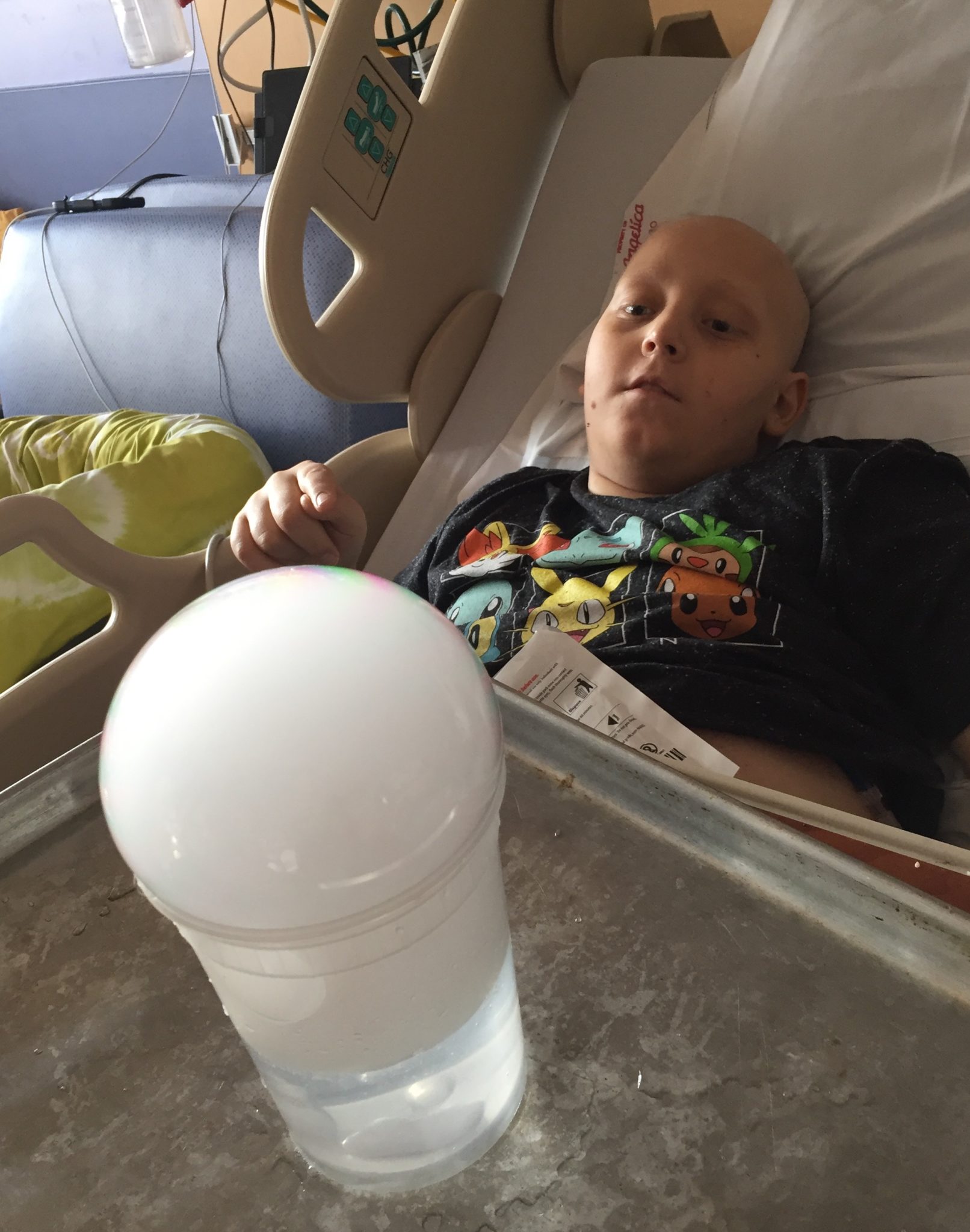 Benjamin has received his second dose of Inotuzumab, and everything went smoothly.

The morning report revealed more of the same: a slow and steady decline of leukemia cells. Benji’s total white cell count is still decreasing, and his platelets continue to disappear. He would need a transfusion today. His tummy is still causing him pretty constant discomfort, but discontinuing his antibiotic wasn’t going to happen today–his absolute neutrophil count (ANC) went down into profoundly neutropenic territory. He will need the protection from bacterial infection for a little while longer.

When the other child who is receiving Inotuzumab arrived in clinic this morning, it was the pharmacy’s signal to prepare the medicine for her and for Benjamin. A casual conversation with a nurse revealed more information than I needed to hear. I said that this other patient must have decent disease control to be able to receive the medicine on an outpatient basis. The nurse was trying to make me feel better by saying that no two kids react the same way, but what she also told me, inadvertently, was that the other child’s blasts vanished immediately. Even though this threatened to fuel my fear that Benji’s cells have mutated again, I was able to dismiss it relatively easily. Michael and I learned very early in this process that we have one child with cancer to focus on. The experiences of the others can be educational, but they truly don’t mean a thing when it comes to our kid.

Benji was premedicated with Hydrocortisone, Benadryl and Tylenol. He fell asleep before the Inotuzumab began. It was protected in black plastic and hung from the IV pole. I lowered the blinds and sat with him while the medicine dripped, wondering what tomorrow’s numbers will bring. This week’s dose is lower than last week’s. His body handled the drug very well. All vital signs were stable. He experienced profuse sweating the entire time, but everyone agrees that’s most likely a product of the Hydrocortisone. His pillow was soaked in a perfect halo around his head.

Benji stayed asleep for a while after his infusion ended. I heard commotion in the hall. My sweet friends were being discharged to go home, with no curative treatment on the horizon for their daughter. It was gut wrenching to watch them leave and to know what they are facing, but it was also beautiful. Their daughter was not in pain today; on the contrary, she was racing down the halls and playing with her All Children’s family. The nurses on this floor are absolute angels. They held their tears to make her laugh. Her parents held each other. Everyone was surrounded in love. I hated to see them go.

Benji woke up in a good mood. Sarah came to visit today and brought bagels from Gainesville with her. He ate several bites. It was all he’d eat all day, but it was something. His liquid intake was much better.

Michael arrived just before Benjamin’s platelet transfusion this afternoon. Sarah brought dry ice for this week’s science time and we all enjoyed the experiments, nurses included. Benji’s participation was relatively short-lived; he wanted to rest, and we obliged with a movie, but not before he took another walk down the hall and back. He’s doing everything we ask of him and so much more.

Benjamin started feeling worse after nightfall. He asked for baths with great urgency. We talked him into taking Marinol at shift change to increase his appetite and offer nausea relief, but it didn’t have the effect I’d hoped for. He kept trying to fall asleep and couldn’t get comfortable. When I lay next to him I called the nurse immediately–he was burning up. His fever was over 103.

Benji spiked a fever after his first dose of Inotuzumab as well. I’m sure that’s all this is. Our nurse did a port culture just to be sure. His heart rate was also elevated and he said he had a headache. His Tylenol should be kicking in any minute. When it does, he’ll fall asleep, and I will gratefully join him.