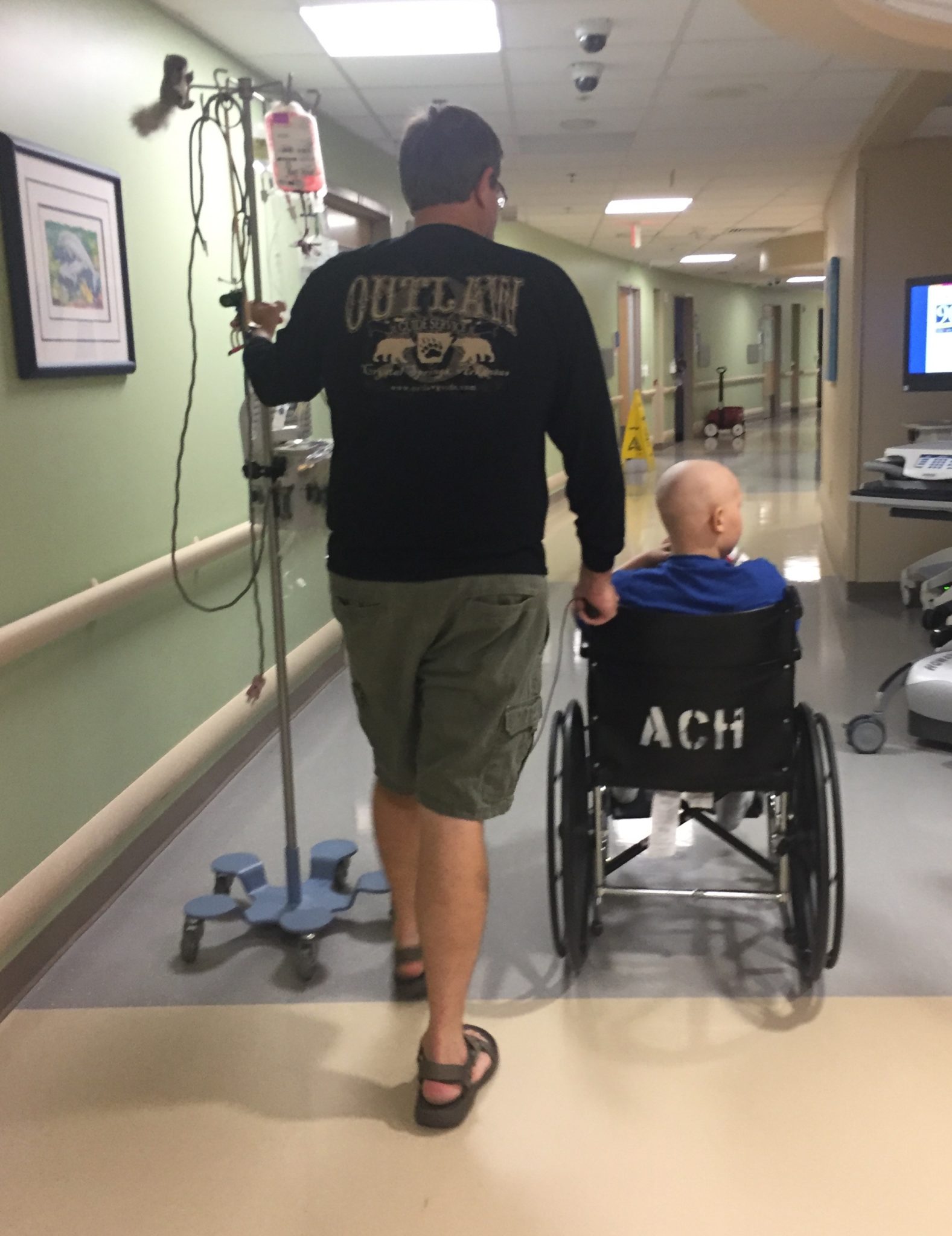 Hope is such a strange and morphing creature. This morning, the fog was so thick outside our window that it masked the world below. Nothing else was visible. With the ethereal backdrop and the paper snowflakes hanging from our ceiling it felt like a true winter dawn in a much more northern place. When I turned from the window to look at my sleeping boy, my grogginess and the sunrise shadows and the fog’s reflection conspired to distort my vision, and my heart stopped. Benjamin’s hand was hanging over the railing of his bed, and it looked like it was made of pure white glass, translucent, breakable, and completely still.

I ran to the other side of the bed, where things began to coalesce. Benjamin looked completely normal. He looked warm and beautiful. The nurses had just come in for shift change. I hit the brew button on the coffee maker, pulled myself together, and listened to the morning report.

Benjamin’s numbers were relatively predictable today. His white cell count, blast percentage, and platelet count were nearly identical to yesterday’s. His hemoglobin level saw the greatest change, taking a pretty significant drop. He would need both blood and platelet transfusions today. I remembered Dr. Grana saying that a ruptured spleen would result in a hemoglobin drop, so I asked if an ultrasound would be necessary. The answer was a definitive no. Palpations from the nurse practitioner showed no rupture, and everyone agreed that if one were present, Benjamin would be in excruciating pain. Fortunately, today, Benjamin’s pain was much more manageable.

Another thing I brought up at shift change was Benjamin’s recently blurry vision. He has had a difficult time lately reading things at close range, or playing his handheld games. I was hopeful that it was a result of the Scopolamine patch that has been behind his ear since his surgery last week. It’s a common side effect. But since he hasn’t had any intrathecal chemotherapy in nearly two months, I was concerned it could be a sign of leukemia in his central nervous system. Even though Benji’s tummy is still sensitive, I removed the patch this morning. I was so relieved when his focus returned a couple of hours later.

I was also relieved when Benjamin asked for a blueberry muffin for breakfast. He hasn’t had breakfast in several days. It was such an encouraging sign. I went downstairs to the 2nd floor cafe (they have the best muffins), and when I came back up, Dr. Oshrine was in the hall. He was on his way to our room.

While neither of us are thrilled that Benjamin’s blasts are still persistent, Dr. Oshrine is encouraged by the significant drops in the total number of leukemia cells. We will definitely proceed Wednesday with the second dose of Inotuzumab. I asked if CHOP would need to see a flow cytometry before we enrolled Benji in their CAR-T CD22 trial, but I already knew the answer–of course. It led to the question I didn’t want to ask. What happens if the flow cytometry reveals that Benjamin’s cells have mutated again? What if they no longer uniformly possess the CD22 protein? I didn’t even have to get all the words out. Dr. Oshrine said that in that case we would be having a very different discussion. He moved on without an explanation, and I didn’t ask for one. We returned the focus to the progress and process that is in place in this moment. It’s all that matters right now. He left reminding me of the positive trends in Benjamin’s numbers, and there was hope in his voice.

Benjamin ate a few bites of his blueberry muffin, and later, half of a bagel. He completed more schoolwork while he was getting his platelet transfusion than he has in weeks. He was due for reaccessing today, so as soon as the platelets were finished, our nurses deaccessed his port and put numbing cream on his chest. He was free from tubing for an hour. He took a nice, long, relaxing bath. He was happy, and so was I.

Benjamin’s port was reaccessed successfully on the first try, but it took him a long time to get mentally ready for the procedure. He would calm down, then grow anxious and scared, and start the cycle over again. I am so grateful to the nurses who increase his trust by waiting until he gives them the go ahead. I hope to help him sharpen some meditative tools before the next access, so he can save himself so many minutes of fear. I could certainly use the practice myself.

After his port was safely reaccessed and dressed, Benjamin received his transfusion of packed red blood cells. Michael arrived while the donation dripped into our boy’s veins. Benjamin had nurses on either side of him, laughing and entertaining silly requests. He needed no pain medicine today, just heat packs and baths. He felt well enough to take wheelchair laps with his sweet daddy around the hall as the sun set. Tonight we ate popcorn, watched televeision, and did artwork. Benjamin was himself again.

It was a good day in our room on the seventh floor. A hopeful day.

A family I love received news today that darkened their hope. Terrifying, numbing news, the possibility of which I have tried to avoid contemplating for many months now. All I know how to do is to try and live in this moment. Tonight I am grateful that this moment is a hopeful one.