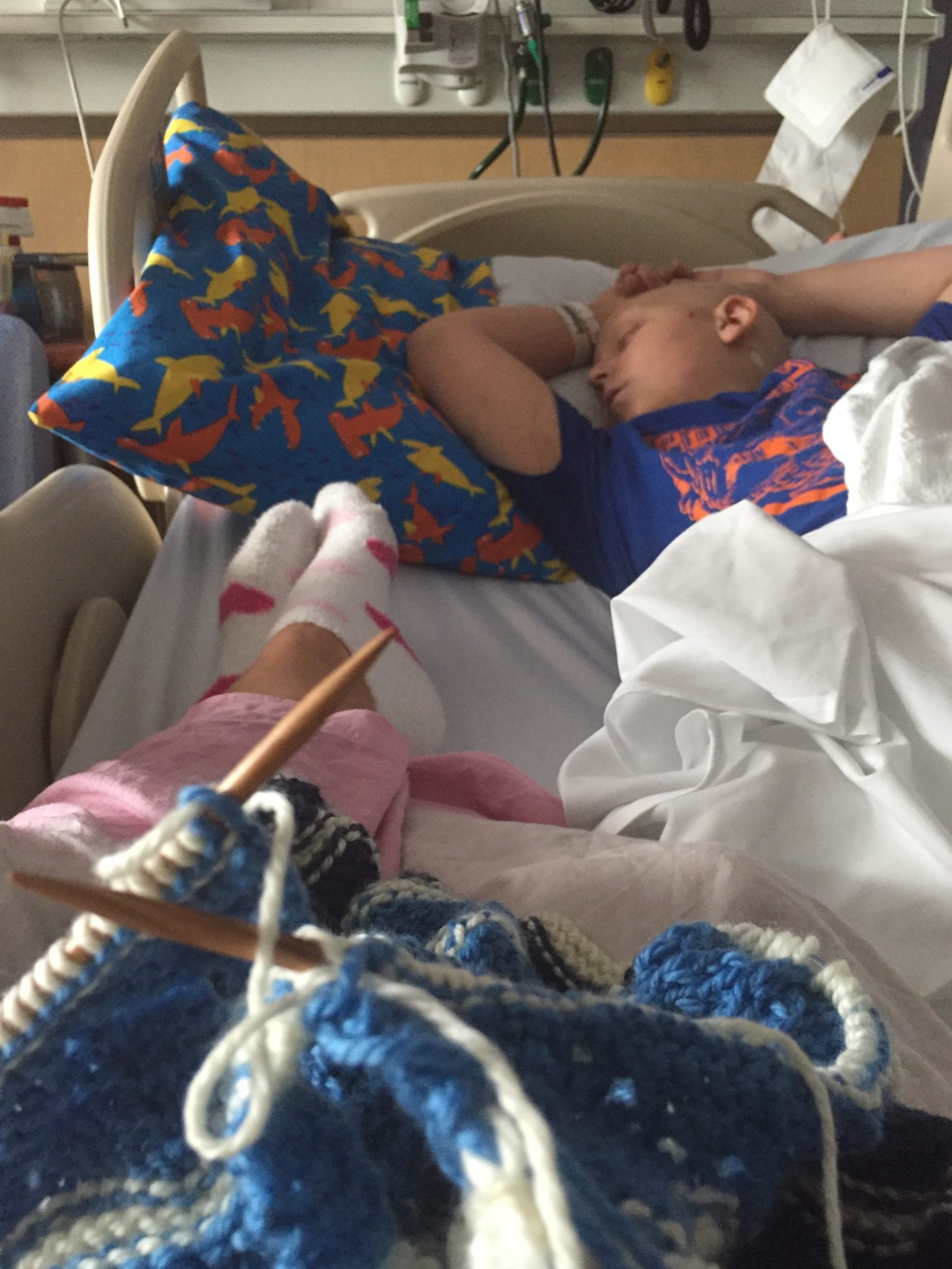 Last night was a rough one. Benjamin woke up several times during our short sleep, unable to find comfort. His spleen hurt worse than it has in weeks. At first I wondered if this was a good sign, maybe some proof that his blood is trying to filter dying leukemia cells. Then my optimism turned to fear. What happens to all these cells if his spleen can’t do its job?

I have to let thoughts like that go. When Benji is scared at a port access or procedure and starts questioning the nurses (I wonder where he gets that from), I tell him to let them do their jobs, and for him to focus on his. I need to take my own advice. The function of Benjamin’s spleen is not my job. My job is to advocate for my boy and to make him comfortable.

Benji’s spleen pain turned into general abdominal pain which gave way to nausea and fever. We gave him Morphine at 3am, Kytril at 4am, and finally Ativan, a medicine he’s never had before, at shift change. The combination seemed to help a little. I also replaced his Scopolamine patch and requested that Marinol be added to his list of available management medicines, even though we didn’t need to use it just yet.

Benjamin’s leukemia blast percentage stayed essentially the same overnight, but his total blast count went down because his white cell count went down significantly. This is good news. I was hoping to see a lower percentage today, but there are fewer leukemia cells in his body than there were yesterday, and that’s a step in the right direction.

All Benjamin wanted this morning was a bath. During rounds we discussed it with the team. Benji’s catheter site is healing beautifully, and everyone agreed he could safely bathe with his dressing on and have it redressed when he was finished. He stayed in bed this morning a while longer, received a platelet transfusion, then summoned the courage to get up and walk to the bathroom. It took everything he had.

Tonight is our 38th consecutive night on the 7th floor. It’s the longest admission we’ve ever had. We’re both feeling it. While we were preparing Benji’s body for his bath, he said, “I want to go home soon.” It wasn’t a dramatic or melancholy statement, it was a point of fact. I agreed wholeheartedly.

The act of walking to the bathroom, removing his clothes, getting into and especially out of the bathtub, dressing and returning to bed was absolutely exhausting for Benjamin. Our nurse came in to remove the dressing from his catheter site. As soon as she was finished, he fell fast asleep. He napped for more than three hours. I sat on his bed, knitting, allowing the last few days to wash over me, praying heal with every stitch.

Michael arrived while Benji slept, and Dr. Oshrine walked in just a few minutes later. He was very pleased with how smoothly everything had gone in his absence. We asked at what point he would ascertain effectiveness of this treatment and decide whether we’d move forward with enrolling Benji in the CAR-T trial in Philadelphia. He said after this first cycle we should have our answer. Either the Inotuzumab will put Benjamin into remission or it won’t. If Benjamin achieves remission, we will plan for a second cycle of Inotuzumab while we prepare him for bone marrow transplant. If he does not, we will discontinue the drug, ship Benji’s cells to CHOP, and enroll him on the study. For now, we wait, and hope, and love each other.

When Benji woke up, his tummy pain returned. He said it wasn’t nausea and it wasn’t his spleen. It was a different kind of pain. He said he felt like something was wrong with his belly. I thought about the polyps we can’t possibly address right now, then returned to logic. He had a powerful medicine for the first time yesterday. Everything he is experiencing is well within the listed side effects of the drug. We just need to try and keep him comfortable.

Kathy and Gana were on their way with Banyan when Benji woke up. When our family arrived, Benji’s spirits rose, but he wanted nothing to do with food. He asked for pain medicine. I spoke with his nurse and we ran down the list. Morphine made him feel sick this morning, he wasn’t due for Kytril yet, and Ativan is designed for nerves and nausea. I remembered the Marinol and requested it.

It’s been well over a year since Benji has had Marinol, and it worked just as beautifully tonight as it has in the past. The hospital was hosting a Winter Fest downstairs that Benji couldn’t attend because of this morning’s fever. Kathy and Gana went down and retrieved some hot chocolate and crafts and brought them back up for Benji. He enjoyed both, and even ate a little dinner. His mood and appetite both improved markedly, and he didn’t complain of stomach pain again for the rest of the evening. I’m grateful to have this ally back in our arsenal.

After today’s long nap, I expected Benji to be up late tonight, but he is sleeping soundly and comfortably now. I am going to join him. So much has happened this week. I feel like I can breathe a little more deeply, and exhale.