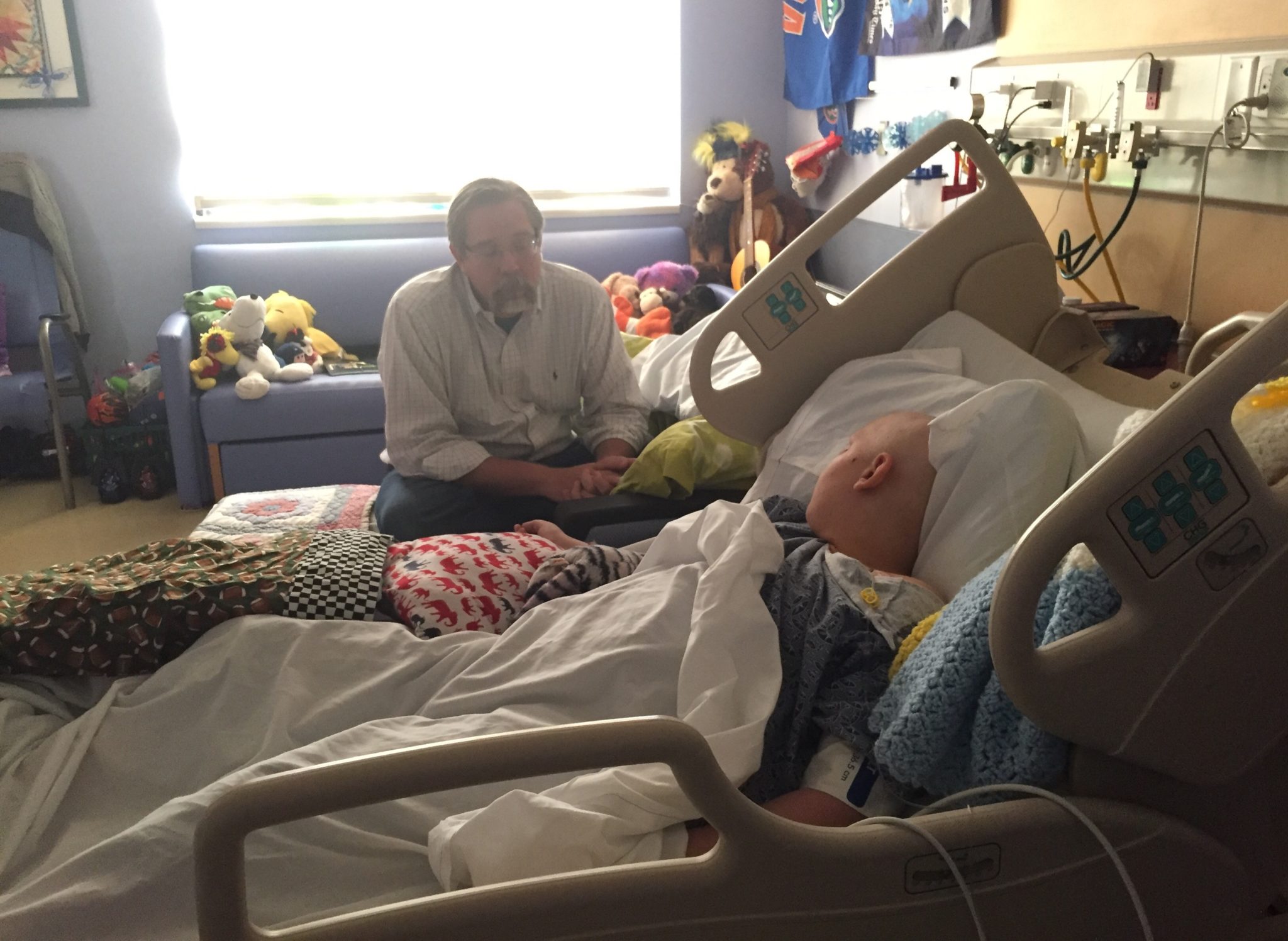 Benjamin has received his first dose of Inotuzumab. Its administration went smoothly, and he tolerated it well.

We both slept as long as we could this morning. We tried to do schoolwork, but Benji didn’t feel well when he woke up, and I didn’t push it. He was sore at his catheter site and in his belly. He also complained of his knee hurting for much of the day, so much so that it was difficult to stand. I hoped this was a product of two days’ bed rest, and not bone pain.

The next several hours were spent waiting. Benji needed platelets (the rest of his labs were about the same as yesterday’s), but our nurse practitioner wanted to hold them until after his Inotuzumab. The new drug was being checked and double checked and cross checked in the pharmacy. We channeled our nervous energy into arts and crafts, and made paper Christmas trees for our room.

Michael came up as early as he could today, around lunchtime. He was here when Benjamin was premedicated with Kytril, Benadryl, Hydrocortisone, Tylenol. I tried to do last minute research. I was struggling with doubt, mainly because of Benjamin’s CMMRD. I reminded myself of all the reasons why this path was chosen for him. Whether or not his cells mutate again, this is the best treatment option for what is happening in his body, in this moment.

Benjamin ate a few bites of lunch before the powerful premedication cocktail made him fall asleep. After what seemed like an interminable wait, I saw a woman walk down the hall and stop when she saw our nurse. She handed her a black bag. Benji’s medicine had arrived on the floor.

Two floor nurses, our nurse practitioner, and a research nurse were in the room to administer the Inotuzumab. One other child on the floor was approved for compassionate use of the medicine today as well. They were the first in this hospital ever to receive it.

Inotuzumab is a clear liquid administered intravenously over a one hour period of time. It is covered by a black bag to protect it from light while it drips. We lowered the blinds and dimmed the lights. Our nurses put on chemotherapy gowns. Michael and I held each other closely as it was hooked up to Benji’s central line. I imagined the medicine seeking out the protein it targets, attaching to the cells, delivering its chemotherapeutic agent, and destroying all of the leukemia in Benjamin’s marrow. So much hope in one little vial.

The nursing team stayed to watch Benjamin closely during the first half hour of the drug’s administration. He slept soundly and his vital signs were stable. Everyone was relieved. I climbed into bed with Benji for the last half hour and slept while he slept. He was pale, and covered with sweat, but he was safe and sound.

Benjamin got his platelets tonight after shift change. The dressing on his apheresis catheter site was changed and he is wearing his own clothes again, no more hospital gown. His blood was drawn to check his electrolytes following the new medication. Everything was in balance. It took him a long time to get comfortable; his spleen, groin, belly and knee were all vying for his attention. But he’s sleeping sweetly now.

I am trying to focus on gratitude rather than outcome–one is within my control and one isn’t. Our wonderful team here procured a drug on compassionate use status for Benjamin in two weeks, a remarkable turnaround time. His first dose was administered safely and without the need for another intervention to reduce blasts. His T-cells are harvested and stored if we need them. He is scheduled to receive additional doses of Inotuzumab weekly for the next two weeks to complete this first cycle, then we will ascertain its effectiveness.