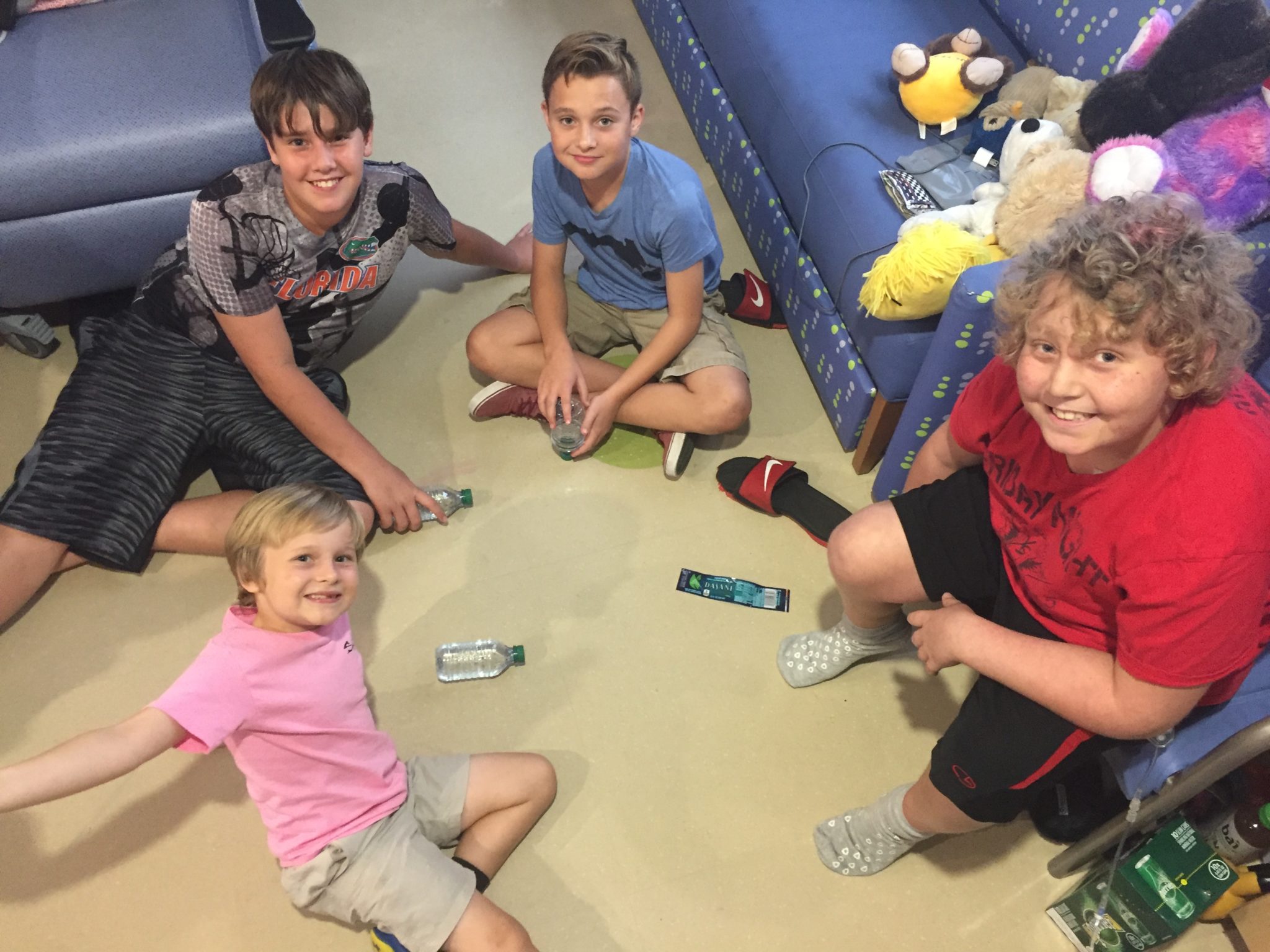 Benjamin had a great day today, despite plummeting numbers. His neutrophil count is just 40. That’s lower than it’s been in over a year; he has virtually no immune system. I’m grateful we’ve escaped a fever so far and hope the trend continues. His platelet count was at exactly 10,000, but because of the return of a bit of blood in his stool last night, we went ahead with a transfusion today. I asked the team to please keep his threshold at 10,000 rather than increasing it back up to 20,000. I want to avoid transfusions whenever possible. When Dr. Grana came in later for rounds, she agreed with me, and said it was wise to “avoid desensitization.”

I have never heard of anyone getting desensitized to blood or platelet transfusions. I’ve heard of a buildup of iron being dangerous down the road, and certainly of allergic reactions. But desensitization is a new one for me. I’m having a hard time researching it, and no other moms in the group have any experience with such a phenomenon. I will certainly ask her to clarify tomorrow.

Paw Paw and Nanny came back for a morning visit before moving on to Lakeland to visit with other family. Benji enjoyed them very much, and so did I. Benji’s platelets were hung shortly after they left, and were finished transfusing before his afternoon visitors arrived: Michael, Banyan, and the boys’ long time friends and neighbors, Wes and Vance.

We had crazy, rowdy, water-bottle flipping, pizza eating, nerf gun shooting, flatulent boy energy up on 7 South for the rest of the day. It was so out of place and so perfectly normal at the same time. I’m so glad they came. While they were here, I walked outside for just a minute or two. I breathed the fresh October air. I couldn’t believe how amazing the weather was.

Benji is nervous about tomorrow. He’s getting his port reaccessed. He’s only had two really scary access experiences and they’ve both been during this admission. I reminded him how many he’s had that were “easy,” a word I use in relative terms. He knows, but he said his port is feeling tender, and these accesses are so close together again. He had just gotten used to a nice stretch of only having bodily invasions once a month.

I’m hopeful for a smooth, positive experience tomorrow. Our nurses said as long as Benjamin maintains a decent level of oral hydration, he can stay “unhooked” for most of the day. I’d like to leave him deaccessed for as long as possible. I’d like him to have a nice, submerging, relaxing bath. Tonight I thought about the Broviac he’ll have inserted for his bone marrow transplant, and how he won’t be able to fully submerge himself for months when that’s a part of him. We have a difficult road ahead. This phase and the immunotherapy that follows are kind of like strength training. I know we can do this.