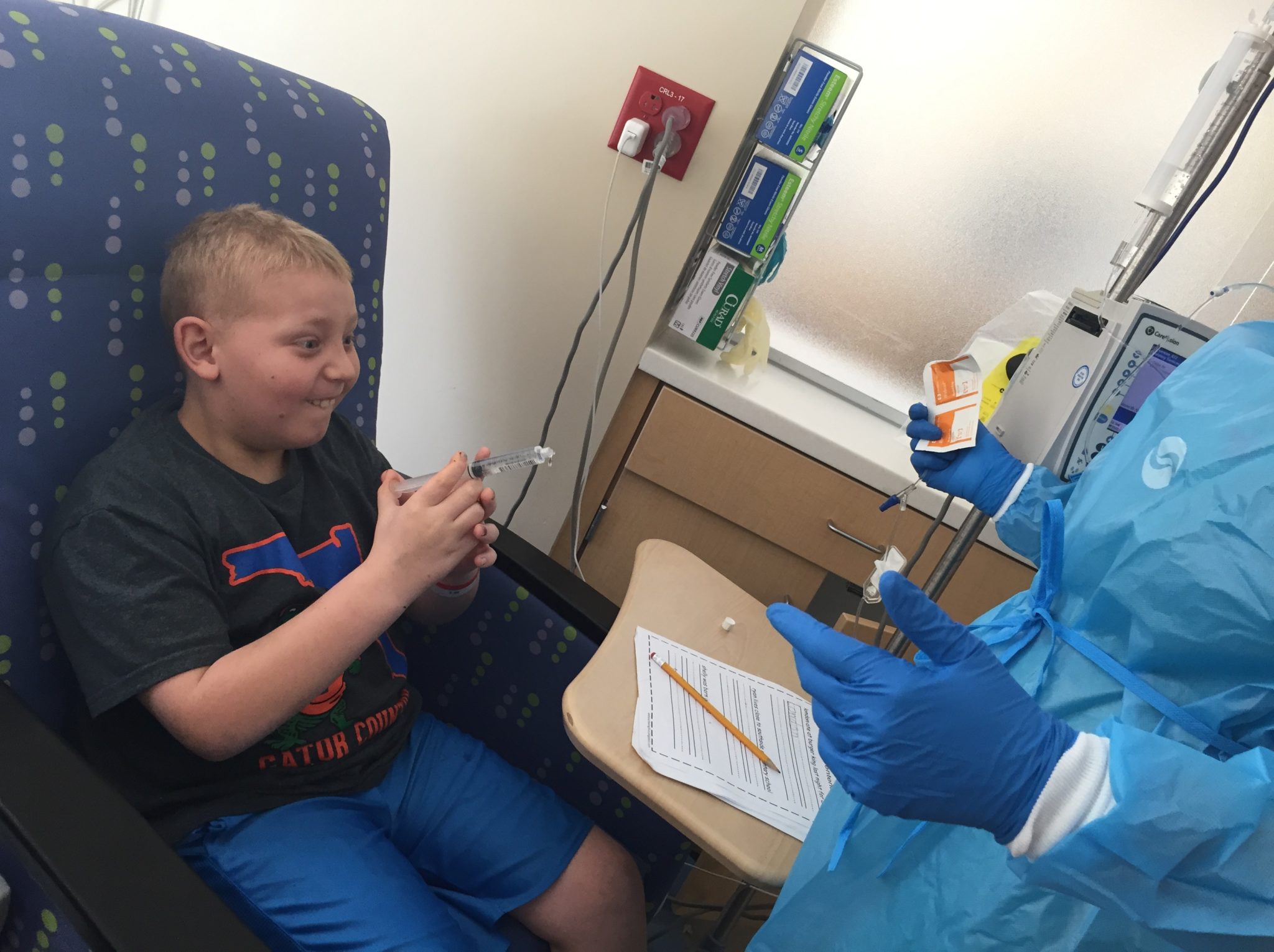 It was a foggy drive over the Sunshine Skyway this morning. We weren’t sure what to expect today; all we had was an arrival time. We didn’t know the order of Benjamin’s chemotherapy medicines or whether he would even get them all. Michael canceled his workday to be present in case the final lumbar puncture of Consolidation was a go. He reminded me to goop Benji up with lidocaine on the tops of his thighs as well as his chest. We were prepared for anything. The fog swallowed the yellow cables of the Skyway, causing them to disappear. It was a reminder to trust the process.

Benjamin had his port accessed and a complete blood count followed. The results showed that his absolute neutrophil count (ANC) is down a little, to 196. He is still severely neutropenic, but this is normal for this phase. Today begins the fourth week of Consolidation. In order to begin week five, the second half of the cycle, Benji has to “make counts,” or his chemotherapy will be delayed. So by Monday, his ANC will need to rise to 750, and his platelets must be greater than 75,000, on their own. No transfusions. These are numbers he must make himself.

Benjamin’s nurse prepared us for the probability that today’s three chemo medicines may not be able to be squeezed into a single outpatient visit. We discussed several timing scenarios, and she left to consult Dr. Moore. They came back in with the solution: they would send Benji down to surgery for his lumbar puncture with Intrathecal Methotrexate first, then we’d go over to the Infusion Center for his intravenous Vincristine and round three of his Erwinia shots, where he’d be monitored for an hour afterward for allergic reaction. This was a great solution for us. Some of the research I’d done suggested this was an ideal order for efficacy. It also means one less trip to the hospital this week.

I walked him back to the operating room and held his hand as he was getting his sleepy medicine. The anesthesiologist, a new one with a kind face, pushed the milky white syringe so slowly. Benji closed his eyes. I was about to lean down and kiss him goodbye, when I saw his eyes move behind his lids. The pre-op nurse, our favorite for her excellent jokes, caught him in the act. “Are you faking, Benjamin?” He lifted his head up and said, “What are you talking about?” The whole team was laughing as the medicine went in further, he gave a huge yawn, and was in a deep sleep in seconds.

For the second week in a row, Benji’s recovery was a breeze. The lower dosage of propofol is something we will continue to advocate for. We headed back upstairs to the Infusion Center. While we waited for the Vincristine drip and the Erwinia shots to come from the pharmacy, we fed him some snacks and knocked out a little homework. He was extremely spicy today, continuing his joking with this batch of nurses. He gave them all pseudonyms, requested dance moves from each one, and, with their permission, used his saline syringe as a squirt gun. By the time we left, he was behind the nurses’ station showing them his favorite YouTube clips, making them laugh out loud.

Once again, Benji took his Erwinia shots like an absolute champion. When it was time, we were taken to the treatment room; it’s the only room in the Infusion Center with a door, which the nurses closed behind them, and took their positions on either side of his chair. Michael stood directly in front of him, his anchor, and I held his hand tightly and whispered, “You can do anything.” He didn’t move a muscle. When it was over, he cried a little. He hates this part. We do too. But we gave thanks, out loud, for the medicine that is healing his body. Then he insisted that the nurses return with a choreographed dance number. They did not disappoint.