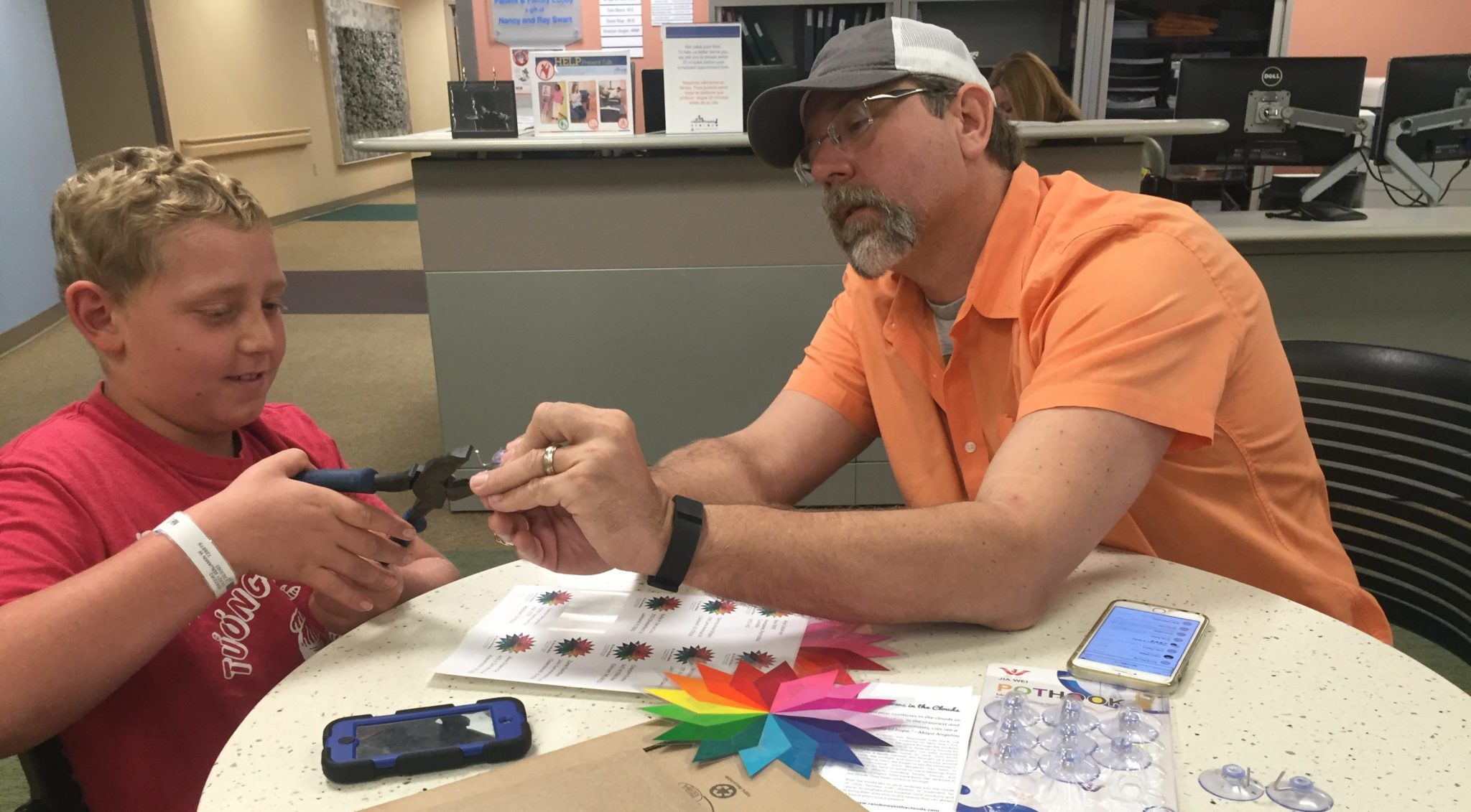 There was a lightning storm last night, and our power went out. As a result, our huge scaredy-dogs kept me awake much of the night, shaking at my side, needing reassuring. I canceled my morning bridge walk due to rain and sleep deprivation. I was grateful to have had what little rest I achieved.

Banyan walked down the street to catch a ride to school with his friends just after sunrise. I hugged him tightly before he left. Middle school is so hard. We waited until the last possible second to wake Benjamin. He was in good spirits. He chose comfortable clothes and bedroom slippers as his hospital attire. He did not complain when it was time to numb his chest with cream and cover the skin behind which his port lies with adhesive. I grabbed our rainbow star supplies, our oils, and a few questions for the oncology team. The Binder, once again, stayed home.

We saw bald eagles and osprey aplenty on the way over the Sunshine Skyway. We play a little game where different species are worth points. We scored a thirty-eight on the northbound trip. Not bad.

While we were waiting for Benjamin’s name to be called for his clinic appointment, we set up a makeshift rainbow star assembly line. I trimmed sharp edges and punched holes, and Michael and Benjamin used the pliers to tighten suction cups. Benjamin folded mailers and helped with address labels. We read each child’s name out loud, and where they are from: Charlie: Knoxville, Tennessee. Graycen: Elkhorn, Nebraska. Connor: Addison, Texas. Jaxon: Mesachie Lake, British Columbia. And sixteen others. Our first shipment will go out tomorrow.

Teri was our nurse in the clinic. She is efficient and quick. All of her supplies were laid out for Benjamin when we walked in, including the freshly drawn saline flushes. Benjamin was in good spirits until it was time for his port to be accessed. Then he grew sad, and anxious. He had a hard time finding his zen place, but he got there; logic prevailed when he realized that the sooner he was accessed, the sooner we would go downstairs, and the sooner we would be on the southbound side of St. Pete. Michael and I donned our masks and held our boy’s hand. Teri counted to three. Benjamin turned his head. We all hoped for the blood return that came instantly, and exhaled.

Once Benjamin’s line was flushed, he was much happier. He drew back his syringes and filled his own vials of blood. Teri covered his port with a dressing and we de-masked. She sent his blood off to the lab, then returned to ask the usual questions about medications, symptoms, etc. While we were chatting, Benji’s CBC came back. Teri showed me the screen. Benjamin’s white blood and red blood cell counts were perfect. His platelets were perfect. His hemoglobin was perfect. His absolute neutrophil count (ANC) was still high, however. I kind of expected this. I don’t know why. It was over 6,000 last time, and this time, it was over 2,000. The ideal range is between 500 and 1500 for children on chemotherapy that is intended to suppress counts. Are we boosting his immune system too much? Or is he not getting enough chemo?

Dr. Moore came in shortly after Benjamin was accessed. We had a great conversation. I feel like last week’s meeting really helped clear the air with everyone, and we could relax a little today. We discussed several things, predominantly this balance in long term maintenance that must be found between giving enough chemotherapy to suppress the cells adequately, but not enough to overtax the organs. Dr. Moore explained that the first cycle of maintenance is typically a fact finding mission, a way to establish a baseline. Typically, two months in a row with an ANC over 1500 would warrant an increase in chemo dosage, but Benji was clearly fighting a virus last month, skewing his numbers. Dr. Moore wants to give it one more month before changing anything on Benji’s roadmap.

In the context of this conversation about finding balance, Dr. Moore expressed his frustration with parents who withhold information, specifically information that their children missed doses of their chemo. This floored me. He spoke about it as though it is a common occurrence, one which leaves him and his teammates to rely on more honest reporters, like liver numbers and red blood cells. It didn’t shock me that parents would miss doses–I honestly can’t believe this hasn’t happened here yet–but it shocked me that anyone would lie about it. I don’t mean to sound judgmental here, really I don’t. I fully recognize my privilege in being in a relationship and a family that allows me to focus almost entirely on Benjamin’s treatment. There are many children who have multiple caregivers, or none at all. But God forbid I ever miss a dose, I will be on the phone with that clinic the millisecond I realize it. Judge me all you want.

Benjamin’s liver numbers were also elevated today, but not to the point of a chemo hold. So it was all systems go for treatment. However, while we were waiting for his medicine to arrive from the pharmacy, Benjamin vomited. Out of nowhere. It was clearly anticipatory nausea. Michael and I felt so badly for our boy; there is really nothing we could say to make him feel better, because we have no idea how his body feels. Something triggered his brain to play the sequence of events that was about to happen: the anti-emetic push, the saline, the Vincristine drip, the beeping, the heparin lock, the elevator, the waiting room, the next waiting room, the stretcher, the operating room, the milky white medicine, black. We don’t know this sequence, from his perspective. All we can do is rub his back and hold his hand.

The sequence in Benjamin’s head played out as expected. He received his anti-emetic, but only after imploring me with his eyes, silently: Will this make me sick? No, this will make you feel better. Then his Vincristine, then the elevator, etc. By the time we got to the waiting room in the special procedures unit, he was active and happy, playing trash-ket-ball with his daddy, resigned again to his plotted course and making the most of it.

We were given a room in the SPU within just a few minutes. The nurses moved through quickly, as did the anesthesiologist. Benjamin was just fine until it was time to go to the operating room. He did not complain, he did not cry. He just breathed a little faster, and asked the nurse which direction he’d need to face when he fell asleep, so he could get his body into position and not have to move. He looked at me the whole time we walked down the hallway, after kissing his daddy goodbye. He tried to fall asleep before the Propofol beat him to it. I kissed his soft hair. I waited for the tell-tale yawn before thanking everyone in the room. Dr. Grana did his procedure today; she was the only one I didn’t get to thank. She had to step out and take a phone call. I didn’t like the feeling of leaving without making eye contact with her. But I knew he was in good hands. Her hands, in that room, I trust.

Michael and I took our buzzer to the cafeteria and grabbed a snack and some water for Benjamin, and picked up his prescriptions from the pharmacy. This time we sat outside while we waited. It was a beautiful day. I’d spent the morning worrying; about Benjamin’s day of treatment, about Banyan’s day of middle school; but sitting on a bench in the sunshine with Michael made everything feel okay.

Benjamin’s lumbar puncture was over quickly. He was sleeping when we walked back into the PACU. He was super groggy at first, then energetic and funny and ready to leave the building. We procrastinated with the nurse a little to buy a bit more horizontal time and avoid a spinal headache, then we grabbed a wheelchair, helped Benji into it, and headed for the elevator. He was restful and hungry on the way home. We scored a sixty-three in our birdwatching game on the southbound trip. We stopped for a bite and made it back in time for me to get him situated with his daddy and a castor oil pack before leaving to go pick Banyan up from school. The boys were truly, deeply happy to see each other when they were both home again.

All of our detox measures were in full effect, and Benjamin had a nice, relaxing evening. But just before bed, he grew tearful. He said he didn’t feel well. I tried to get him to specify, but he just didn’t feel well–period. It’s to be expected after being pumped full of chemo three ways in one day, and having anesthesia, and beginning a new pulse of steroids. He just wanted to cry a little. It’s very unlike him but very okay. It was a hard day. It’s one thing to be brave and strong when the hospital is your daily life, when you’re used to it. It’s quite another when you’re just getting used to second grade and baseball practice and guitar lessons and BAM, this semi-truck of chemo comes once a month to remind you that oh yes, you still have cancer.

At the end of this day I feel honored to be the mother in such a powerful family. I have children who are both overcoming huge obstacles in their own ways. I have a husband who is deeply in tune with each of his sons, and with me. We have dogs who need us when it rains. Life, despite everything–or because of it–is very, very good.