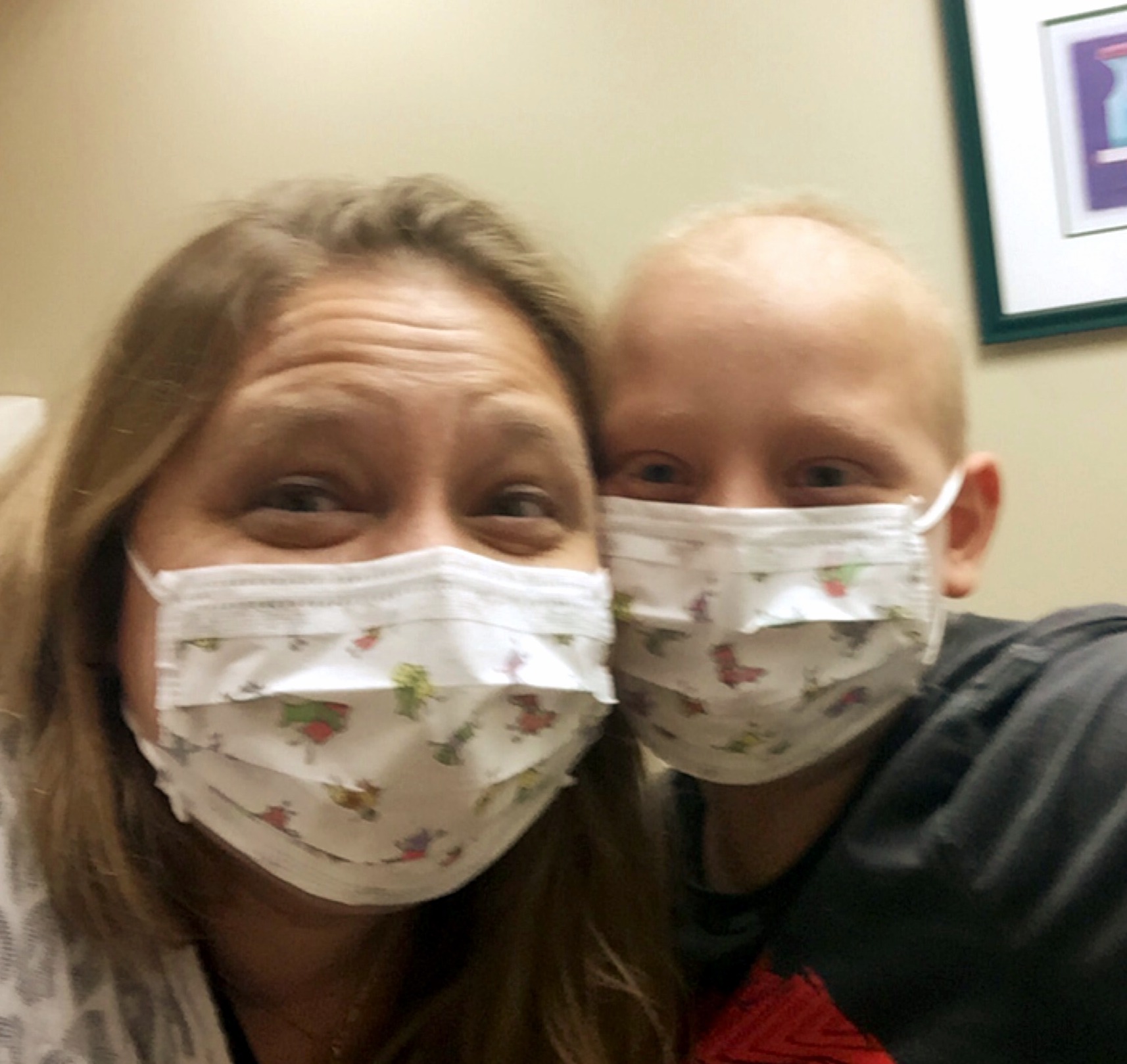 We all woke up easily and felt well rested. Benji was calm and sweet upon waking, and neither of us felt nervous. There was a quiet confidence in our house as the sun rose.

I packed our lunches and made Benji his requested breakfast. Michael’s sister Gana arrived to join us on our trip over the bridge. I put extra numbing cream on Benji’s port, and we walked out the door just as the sky opened up and the rain fell in buckets.

The rain didn’t stop as we crossed the Skyway, and Benji rested most of the way there. We checked in, and Benji was proud to show his aunt Gana his routine. He took his own vitals and drew his own blood into the vial. We took a chance on skipping the finger poke; I assumed his absolute neutrophil count (ANC) would be well above the 750 he’d need, since he was at 7,950 last Monday. He did make counts, but his ANC was way down today, to 1,060. He’s neutropenic already. But it’s still a good solid place from which to start this next round of medicines. They will reduce his counts considerably over the next several weeks.

Benji was brave while his port was being accessed, using his calming oils and laughing with Gana. As soon as the needle entered his chest, the nurse told him to be still. His port had slipped. She was able to reach it easily on the next try, but it was enough to make my heart stop for a moment. She said that as his port continues to get accessed, it will become a little less secure in its pocket of tissue. I’m glad she told me so that I can help him to be as still as possible, and give future accessing nurses a heads up. We need this port to last throughout Benji’s treatment; to always give blood return, to stay healthy and clean.

I was happy to see Dr. Grana come into the room. I had many questions today. Benji’s dosing weight has increased, so he will be getting higher doses of chemotherapy this round than he has previously. I had questions about this, about the oral Thioguanine he’ll start tonight, about digestive enzymes to help regulate his weight gain from steroids, about intravenous asparaginase options, and about a new genetics study I’d read. Her answers were concise. I would have enjoyed a longer conversation with her, and may bring these topics up again with Dr. Oshrine, who indulges research discussion at length.

One of Benjamjn’s medicines today, Cyclophosphamide, requires two hours of hydration before administration and four hours afterward. They began his pre-hydration in clinic, then we went to the Infusion Center. Before the two hours was up, he was given Kytril for nausea, and his first of eight doses of intravenous Cytarabine. Before the Cyclophosphamide was hung from his IV pole, I requested a specific gravity test for his urine, as there wasn’t one listed on his orders. Cyclophosphamide can have serious ramifications to the bladder. I wanted to be sure his pee was diluted enough. His numbers came back at exactly the mark needed. The medicine began.

I watched Benjamin carefully and put his calming oils in my pocket, but neither the Cytarabine nor the Cyclophosphamide had any ill effects; no taste or smell issues, and no nausea. In fact, he was eating nonstop throughout the day, still feeling the effects of his last Dexamethasone pulse. Gana kept him distracted with movies, cards and games. We were thankful to have her with us.

We were cleared for discharge just before 6pm. Benji’s tummy hurt mildly and his appetite definitely waned. He was still in good spirits. He rested on the way home, and we went to dinner with Michael when we arrived in Sarasota. For the next two weeks, we must time his oral chemotherapy carefully around his final meal of the day. It will be good practice. He’ll be on oral chemo during the length of long term maintenance.

Tomorrow, Benji will have a lumbar puncture with Intrathecal Methotrexate, and his second dose of Cytarabine. After we came home tonight, he said, “I’m so glad I’m strong.” He was talking about something entirely unrelated to his cancer treatment, but it filled me with joy to know that he knows it. He is strong, and it’s not in question. We’re one day closer.