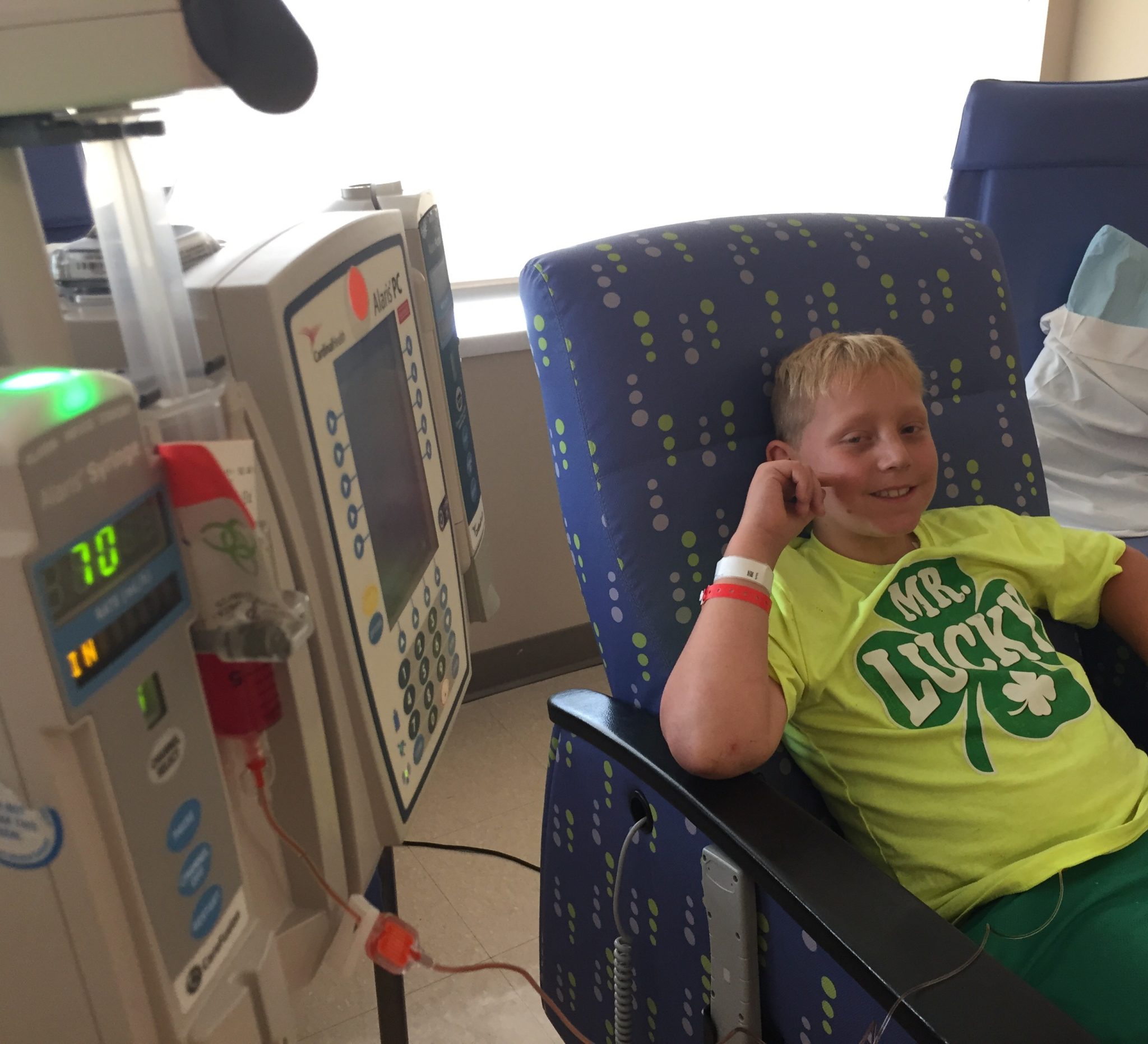 Benjamin slept extremely well in his new bed. He was the last to rise in the house. We made breakfast, packed lunch, and headed to All Children’s. His attitude was terrific. We finished the Charlotte’s Web audiobook last week, so he chose a new one today: The Lion, The Witch and The Wardrobe. An excellent choice.

Our first stop was the Hematology Oncology Clinic, where Benjamin’s port was accessed and his blood was drawn. Getting accessed is still uncomfortable for him, and I suppose it will be until his port is finally removed three years from now. He doesn’t like the feel of the numbing cream, or the smell of the alcohol cleaner. The more he is accessed the more tender his skin becomes, and the more sensitive he is to the needle going in. And of course, with every poke comes the saline flush. Benjamin coped beautifully, making excellent use of his calming oils and his indomitable spirit.

Dr. Oshrine was our oncologist today. We haven’t seen him in several weeks and it was good to reconnect with one of our A-team. I asked him about Benjamin’s tenacious hair, and he said that while it’s tempting to correlate hair loss (or lack thereof) with efficacy of treatment, there is no relationship. It’s just another symptom that affects some children and not others. I asked him about the second half of Delayed Intensification, which includes the last medicine we haven’t experienced yet: Thioguanine. It’s very similar in structure and effect to 6MP. It’s one of the oldest chemotherapy medicines. Further research at home revealed a slightly higher liver toxicity than 6MP, so we’ll be reintroducing milk thistle in a week or so.

Other than the Thioguanine, the rest of this phase (which begins in August) is comprised of medicines we’ve seen before. While Dr. Grana told us to expect hospitalizations in August, Dr. Oshrine had a more pragmatic approach, saying that about 50% of patients get fevers that require admission during part two of Delayed Intensification. We’ll take things one day at a time. Otherwise, Dr. Oshrine was extremely pleased with Benjamin’s progress, and said that he’s “cruising right through” Delayed Intensification. His counts are exactly where they need to be and his symptoms are being properly managed. He is frankly kicking ass.

Next up was the Infusion Center for Erwinia shots, Vincristine and Benji’s final dose of Doxorubicin. The shots were ready almost immediately. Benjamin remembered his Jedi tricks, and once again, he achieved a state of mind control few adults could attain. After half an hour of monitoring, Benjamin was given Kytril, followed by Vincristine. Finally the bright red Doxorubicin was hung from Benji’s IV pole. He looked at me nervously and asked for a bucket. I told him I’d get him one, but that I didn’t really think he needed it. He had taken the Kytril and if he could overcome the taste and smell of the medicine, he would make it through. Use your oils, and your mind. You’ve got this. And he did. He made it through. That medicine and its awful taste are behind him now.

Benji’s tummy was tender on the way home and he wanted a nap. He fell asleep just as Edmund was entering Narnia for the first time. While he slept I went to two pharmacies (with a third on deck for tomorrow) to fill his new prescription for Dexamethasone. We are beginning a second round of the steroid today. When he woke, he was feeling much better, and he was hungry–a good thing, because Michael’s mother and sister were on their way with homemade enchiladas, cornbread, black bean salad and fruit. It was delicious, and I am so thankful.

Tonight at bedtime, Benjamin tossed and turned. He said he “felt like the hospital.” There were tears, and he was holding his tummy. The Dexamethasone makes him hungry and the Doxorubicin makes him nauseous. The Kytril is wearing off but I can’t give him another dose yet. It’s such a brutal combination. I asked Michael to bring a banana (potassium takes the edge off of the Dexamethasone) and I lay with him in his loft bed until he fell asleep just before midnight.

Benjamin conquered big fears last week, but the triggers still come, and at unexpected times, for both of us. Today is Day 200 of his treatment for leukemia. In 200 days, Benjamin has had:

I don’t know how many times he’s been accessed, or how many flushes he’s had, or doses of anti-emetic, or heparin locks. He may be cruising through, making everyone laugh in the process, but the triggers still come, because look at that list. His spirit is indomitable, but tears are inevitable. I feel so thankful to be present for him when they fall.