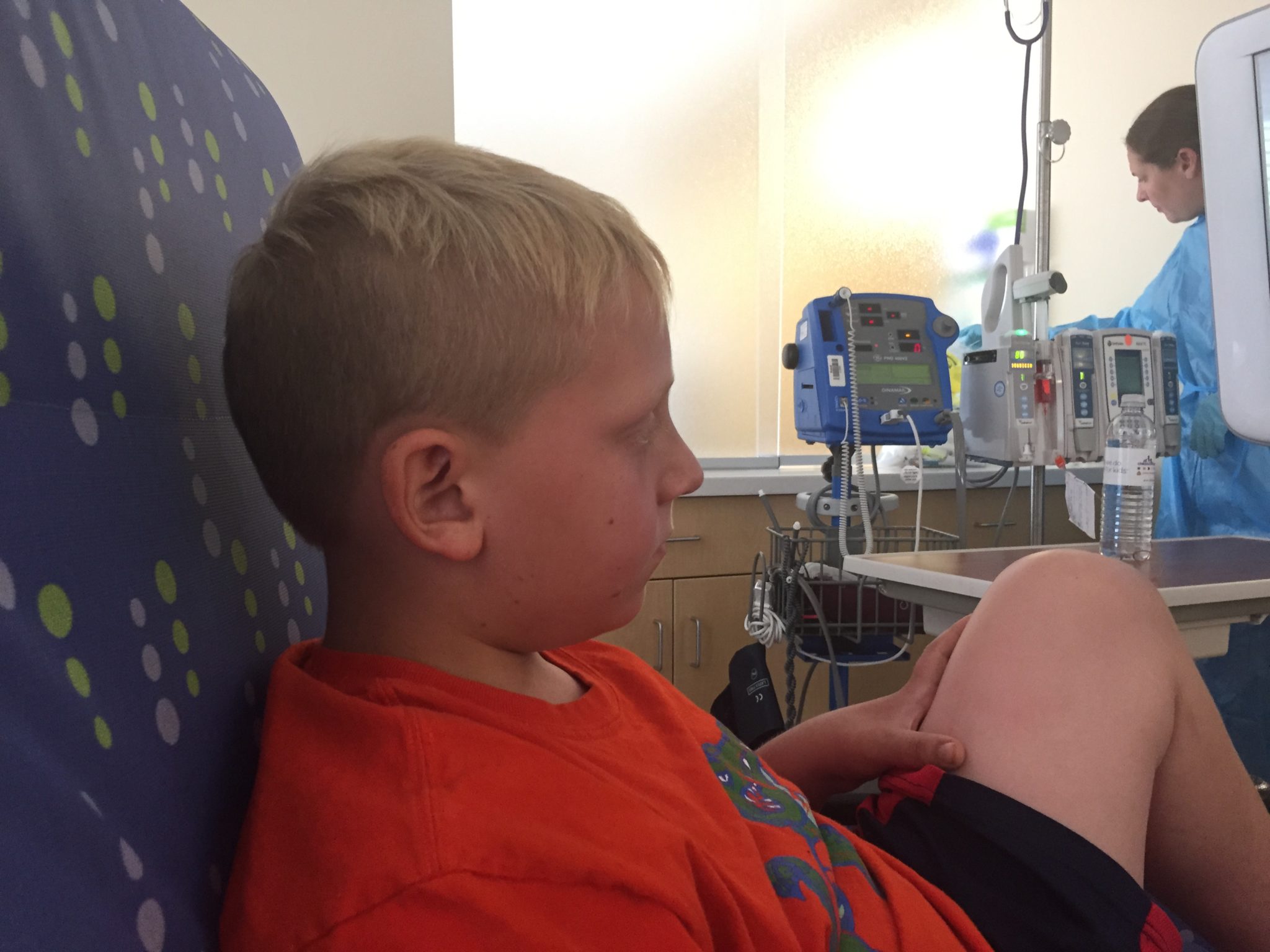 Today was a challenging day. I am grateful once again for this space to sort it out. I had to work harder than usual to stay positive today, and I know that mostly it’s because I’m feeling completely exhausted. Benjamin was my path to holding it together. There is no other option. “One day closer” is becoming my new mantra. My challenges are incomparable to those Benjamin overcomes.

It was an early journey over the Skyway and a brilliant sunrise accompanied us. Benji slept through most of the drive. I was glad. I knew it would be a long morning. Mondays always take longer than other days in the Outpatient Care Clinic. Mondays are the days when the physicians and physicians’ assistants write the orders for the week. Orders can’t be written until the physicians see the bloodwork. The pharmacy can’t prepare the chemo until they receive those orders from the physicians. And the nurses can’t administer the medicine until the pharmacy prepares it and sends it upstairs. It’s a process with which we’ve learned to be patient. I brought plenty of snacks.

Routine parts of Benjamin’s healing process which were once uneventful are now bringing him more pain and discomfort with each visit. There was a time he barely blinked when getting his port accessed. Now, it hurts, like the flushes that come after, or the little blue alcohol rubs that clear the line. Once these things were tolerated today, Benji’s blood was drawn, and then we waited.

Out of the blue, during the wait, Benjamin asked, “Do you think I’ll die when I’m eight?” as calmly as if he were asking what was for dinner. My mouth went dry. “Of course not!” I said. Looking right at me, he said, “But Alex was eight.” He was talking about the little girl after whom Alex’s Lemonade Stand Foundation was named. I reminded him that she had a different kind of cancer than he does, and that he was healing so well and doing such a great job, and other words I can’t remember now. He instantly and easily moved on to the next thought in his head. Something about chicken fingers, I think. My recovery from his question took a lot longer than that. He’s known about Alex for weeks now. Why did he ask that question today? How long has he been holding it? How is he so calm when doing the asking?

Dr. Hale was our oncologist today. I requested that Kytril be added to Benjamin’s orders (there were no anti-emetics prescribed), as he was receiving Doxorubicin, Vincristine and Erwinia today. I also asked him about the remarkably high absolute neutrophil counts I’ve been seeing: today Benji’s ANC was through the roof at 6980. Dr. Hale assured me that his numbers were perfectly normal for a child coming off of a week of dexamethasone. We talked about a few other symptoms and Benji’s orders were sent to the pharmacy.

The Kytril was administered first, and a little over an hour later, Benjamin’s Erwinia shots arrived. We were halfway through Toy Story when the nurses called us back into the closed Treatment Room. They were nurses who don’t typically administer his shots. I don’t know if that added to Benji’s nerves, but he was so worried. The tears were forming before he even sat down. His whole body was tense when the needles went in, and the medicine burned worse than ever. He cried. I cried, though I didn’t let him see. He could hardly walk. This was such a different reaction from the shots he had back in Consolidation. I didn’t have the heart to tell him he has to go through this ten more times. I just kept telling him he was stronger than the pain. He was one day closer. He nodded like an athlete listening to a coach, and we took our necessary laps around the Infusion Center.

After half an hour or so of monitoring, the nurses administered the Vincristine, then the Doxorubicin. Benjamin didn’t even see the nurse switch the lines between the two medicines, but as soon as the bright red doxorubicin entered his body he looked at me with giant eyes and asked for a bucket with urgency. I gave him Rescue Remedy and talked him into a ginger ale. It worked. Barely.

We chose to leave Benjamin’s port accessed, as we’ll be back Wednesday and Friday for more Erwinia shots. The nurses gave him Heparin, I signed the discharge paperwork, and we were on our way. Benji felt strong in the afternoon, requesting a sandwich and insisting I do my grocery shopping so he could join me. When we got home and I started unloading the groceries, he went to rest on my bed and watch television. He didn’t get up for a long time. I stopped doing chores when he asked me to come lie next to him. He was nauseous and shaky. His body was getting sore.

By the time Michael got home, Benjamin’s shoulders and back were hurting. Getting up and sitting down were painful. With his daddy next to him, I went to the computer to pose three questions to the online moms: one about the high ANC, one about the body soreness (which could be the Vincristine or the Dexamethasone), and one about his worsening experiences with the routine parts of his care. Normal, normal, normal, I was told repeatedly, with several “hang in there” type comments thrown in.

I remembered the day we were in the Infusion Center with Cody, and he just kept repeating, “Not today. Not today. Not today.” I wondered if the normal had become painful for Cody too. I texted his mother. She said that’s exactly what happened to him, and during Delayed Intensification, it was the worst. But now that he’s in maintenance, he’s back to himself again. We will get through this. One day closer.

Benjamin was able to eat dinner, then we returned to bed. I finished Charlie and the Chocolate Factory and we were just settling in to watch the old school Gene Wilder version of the film when we heard a knock at the door. It was a friend from Michael’s old softball team. Michael helped form the team a decade ago, and stopped playing when Benjamin was diagnosed. Tonight the team won the division championship. His friend had come over to deliver the trophy to Michael, on behalf of the team. Such kindness.

We finished watching the movie and Benjamin fell asleep almost immediately. He was exhausted. I am going to prioritize sleep and rest for both of us this week. His physical strength and my emotional fortitude will be greatly enhanced by it.