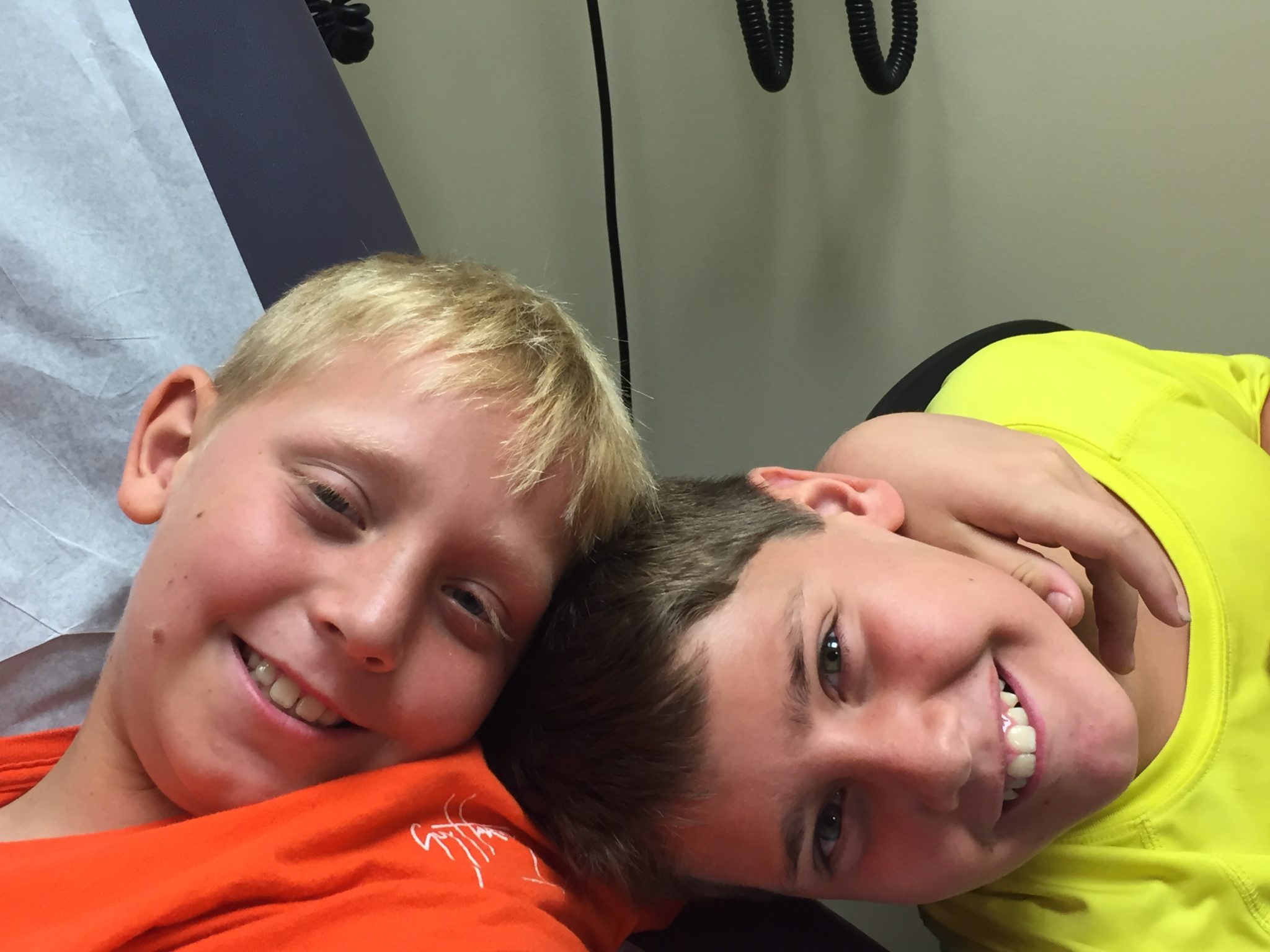 Benjamin felt yucky again this morning. He woke up early enough to go to Michael’s Monday breakfast meeting, then changed his mind and came back to bed. This was totally unexpected, as he loves being included in Daddy’s workday. He slept until I had to wake him up to get ready to drive north.

Banyan joined us for our trip to the Outpatient Clinic. I was grateful for his company, though the two of them together in the waiting room/exam room/bathroom/elevator created a whole new set of challenges. It was worth it. His antics kept Benjamin distracted and happy. The worst tummy pain Benji had today was just before and just after his appointment.

We’d expected Benjamin’s absolute neutrophil count (ANC) to continue its slow decline, but it took quite a hit this week. It’s down to 460, putting him back into the “severely neutropenic” category. Dr. Oshrine advised us to stop giving Benjamin his nightly oral chemotherapy (6MP) until his counts recover. He assured me that every patient goes through phases where 6MP is put on hold. It’s not considered a delay in treatment unless he doesn’t make counts (or have an ANC of 750) on Monday, when we are scheduled for our last hospital stay of Interim Maintenance.

Each phase of treatment comes with its own unique philosophy. During Consolidation, it was acceptable for Benjamin to linger in the severely or even profoundly neutropenic realm for a while. It was a phase that was designed to suppress the marrow. Interim Maintenance is designed to give the marrow a break. So while an ANC of 460 isn’t alarming in and of itself, the team doesn’t want it to get any lower, or to stay low for any real length of time. The next phase, Delayed Intensification, will attack any remaining leukemia cells in the marrow–and his immune system will reflect that treatment. So during these last weeks of Interim Maintenance, they want his marrow to be protected, productive, and happy.

Benjamin’s tummyache had him in tears in the car on the way home. By the time we arrived in Sarasota, he was feeling a million percent better, and ready to play. It’s so hard to know the source of his discomfort: is it residual, cumulative yuckiness from the methotrexate? Is it a mild tummy bug he’s fighting off? Or is it a nervous association? He vomited yesterday because he looked at food he associated with the hospital; his tummy hurt today on either side of the clinic. Is that a coincidence?

Banyan was invited to a friend’s house to play and spend the night, so Benjamin invited a friend over for a few hours this afternoon. After dinner, he played with the neighbors in the street until dark. He was drenched with sweat when he came in. I kept refilling his water bottle, and watching him from a healthy distance. I still fight the urge to tell him to take it easy. But I also believe that when his body feels as good as it did this afternoon, it can only be healing for him to play, and play hard. Sweat. Move lymph, move fluid, move medicine. Detoxify. Feel strong. Feel the power in his bones.