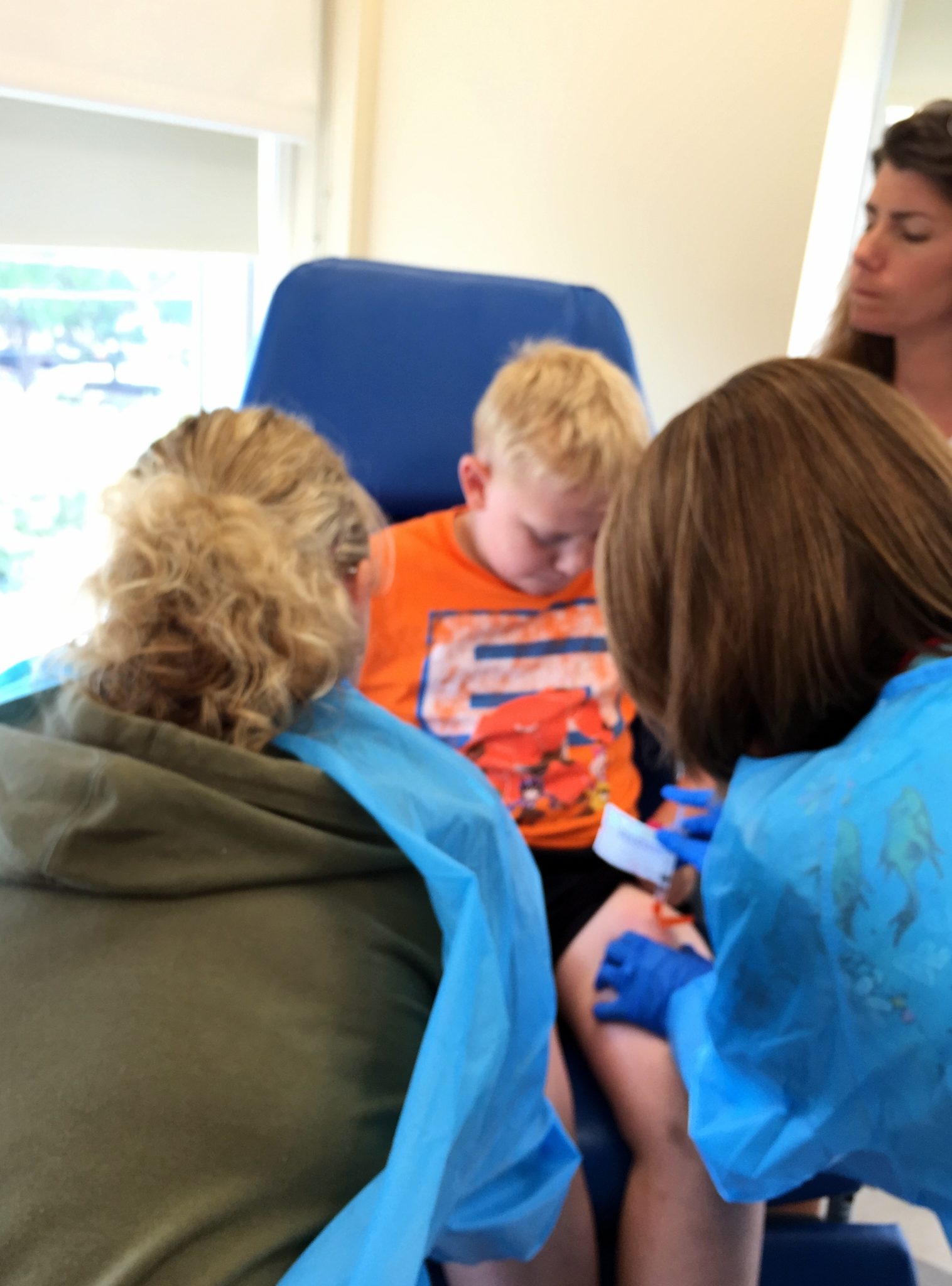 I woke up before my alarm this morning. When Benji sleepily walked down the hall next, he asked, “Do I have to get shots today Mama?” I answered yes, directly. He took a deep breath and a pause, and said, “Okay.” No defeat, no complaint. Just resolution. It was a solid feeling to start our Monday.

We were both happy that Michael was able to go with us over the bridge today. We counted the ospreys, eagles and dolphins, assigning points to each and tallying them up. I climbed in the backseat at 8:30am to put numbing cream and dressing on Benjamin’s chest, and again at 9:00am to goop up his legs. The timing of the cream is tricky, and must be considered against probable wait times in the clinic and Infusion Center, but I think we’re learning to maximize its effect.

Benjamin’s blood counts continue to follow a “perplexing” pattern, one we are reassured isn’t relative to the efficacy of the medicine. His hemoglobin is staying put in its comfortable spot between 8 and 9. His platelets are a whopping 274,000, clearly being produced on their own by his bone marrow. His absolute neutrophil count (ANC) came in today at a severely neutropenic 469. With last week’s odd numbers, it’s nearly impossible to tell if Benji has passed his nadir period from this latest Ara-C cycle, or if he’s just dipping into it. I’m hoping, and guessing based on those platelets, that the first scenario is true.

We had a longer appointment with Dr. Oshrine today than we have since we discussed the results of Benji’s Day 29 bone marrow aspirate. Because Michael and I were together, I think we all took it as an opportunity to touch base on where we are now, and where we are likely to go. If Benjamin’s neutrophil counts are on the rise Wednesday and Friday, he will probably have his next (and hopefully final) bone marrow aspirate early next week. The marrow will be sent to Johns Hopkins, where a cytometer will search for Minimal Residual Disease (MRD), or the presence of leukemia cells greater than 1 in 10,000. If MRD is detected, we will follow a different path, one that hasn’t been explained to us, and hopefully never will be. If MRD is negative, Benjamin will be in clinical remission, and we will move forward with the next phase, Interim Maintenance.

Dr. Oshrine remembers how much energy was placed on the last MRD result, by everyone. We are all being cautious about placing this kind of energy on the upcoming test. He assured us multiple times that whatever happens, we will have a plan ready to put into immediate action. Benjamin’s body will tell us what it needs.

On Mondays, Benji’s blood is also sent off for a comprehensive panel screen. His liver and kidney functions can be measured by looking at things in the blood like creatine, glucose, bilirubin, albumin, etc. These results aren’t usually given to us, but I’ve been asking to see them if there are numbers that start to look high; I know that this phase in particular can be harsh on the liver. Dr. Oshrine brought me the screen today, and showed me what they were keeping an eye on. Nothing is alarming, but Benji’s ALT (alanine aminotransferase) levels are higher than they should be. Dr. Oshrine explained that they don’t become a concern unless they correspond with a spike in bilirubin, which Benji isn’t showing. He also tried to reassure us that liver irritation is expected during this phase, and at the end of chemotherapy, his liver should experience a complete recovery.

Still, it is unsettling to think of an organ in Benjamin’s body with such a vital function being so overworked. I snuck a little fresh grated turmeric in the sloppy joes tonight, and made decaf green tea to go with dinner. I don’t know what else to do, except tell him to drink lots and lots of water, and wait until this medicine is out of his body for true detoxification and rebuilding.

We headed over to the Infusion Center for Benji’s medicine with a batch of homemade granola for the dancing nurses. Benjamin got a little schoolwork done while his Vincristine dripped, then we went into the treatment room for his nineteenth and twentieth Erwinia shots. He readied his face, and remembered to breathe. He made it look easy. He made me feel better. Michael took pictures, and I’m so glad. This bravery Benjamin is showing us isn’t because he has to, or because it’s what’s needed of him now. It’s because it lives inside him. It’s just there, it’s who he is. It comes to him naturally, and for that I am so grateful.

During the hour wait that followed, Benjamin’s new friend Cody arrived for his treatment. The two of them were as thick as thieves before we left. I was so glad we overlapped, and wonder if we will again. After this week, they’ll be in long term maintenance. They say this is when life starts to resemble normal again. For us, it’s six months away. The blink of an eye, really.

After our long appointment, we visited the same Mexican restaurant that we frequented during Induction. Benjamin carved his name into another clusia leaf, exactly three months after Michael carved the first one. So much time has passed since then, so many lessons learned. So many more days ahead. But we can see the light. It’s coming from inside our boy, too bright to ignore.