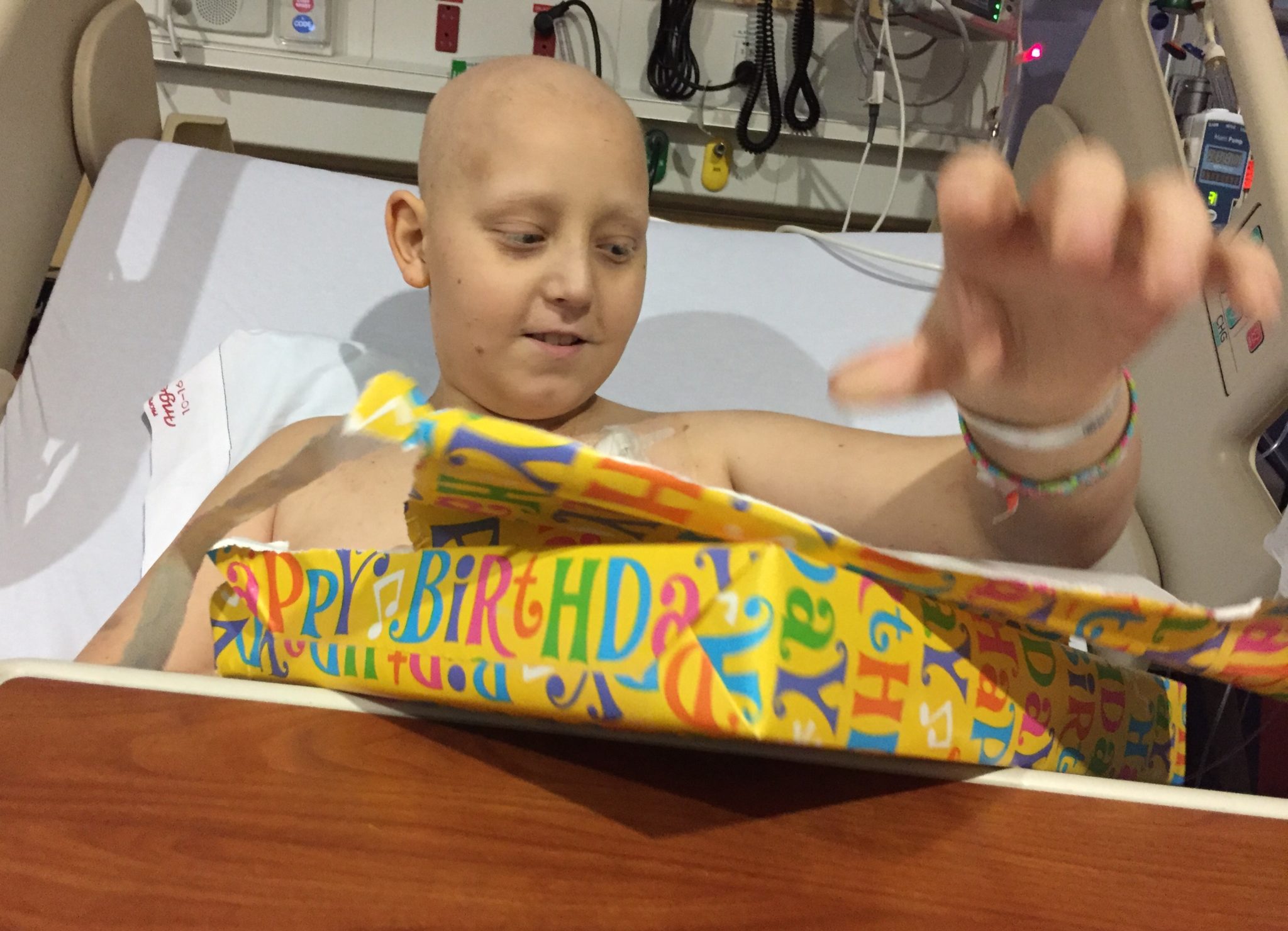 Benji has received his last dose of Inotuzumab, at least for this cycle. The next step is a huge step, and I’m trying to stay present as it approaches. For now, we just need to get him feeling more comfortable, whether home is on the horizon or not.

We were up before the sun again. Benji’s belly began its daily torment during morning labs. He made it to the bathtub and back into bed before vomiting. We got him comfortable and both returned to sleep for hours. I woke up at shift change only to ask about transfusions–he wouldn’t need any. I didn’t need any other information just yet.

When we finally woke for the day, Benjamin’s belly hurt badly, but he did not vomit again. He worked on staying peaceful and calm. Tomorrow is his birthday, and he can’t even consider the idea of a birthday cake right now. He hasn’t eaten solid food since Sunday. Today during rounds the team added Carafate to his daily regimen as well as another IV antacid. They removed his oral Prevacid and Allopurinol so that at least for now his pill intake is minimal. I hope it all helps. This can’t go on much longer.

Benji’s Inotuzumab was prepared in the pharmacy early this afternoon. Our sweet nurse came in to premedicate him with Tylenol, Hydrocortisone and Benadryl. He fell asleep as soon as the Benadryl began. Just before the Inotuzumab was hung, we noticed that Benji’s chest was red and splotchy, as if he’d had an allergic reaction to something. We all felt that this was highly unlikely given the cocktail of medications he’d just had. Our nurse practitioner came in to give him a closer look, and saw that the redness was also beneath his port dressing. Super. Of course I was thinking of all manner of infections that could be brewing, but fortunately the symptoms faded almost as quickly as they’d arrived, and never returned. He could have just scratched himself in his sleep.

I lowered the blinds and turned off the lights and we proceeded with the Inotuzumab. Benjamin slept peacefully the whole time. His heart rate was on the low side for part of the administration but never dangerously so. He tolerated it well. He didn’t sweat nearly as much as he did during the first two doses. And so far, no fever, which is wonderful.

Benjamin’s nurse practitioner will be out of the office next week and won’t return until after the New Year. She is very invested in making plans on Benji’s behalf and I appreciate her so much for it. While Benji was receiving his medicine, she came in to talk to me about the potential placement of a feeding tube while Benjamin is under anesthesia on Tuesday for his bone marrow aspirate. Um. Excuse me? She was thinking ahead to the possibility that Benjamin may not have regained his appetite by then, and wanted to minimize his procedures. I appreciate the forethought. But that is not happening. He ate as recently as Sunday and we will work with him to get enough nourishment naturally. Both the C. diff and the Inotuzumab are on their way out. His appetite will return.

Going home for Christmas will very much be a game time decision. He needs to be eating and drinking and able to take a bunch of pills to replace what he’s getting intravenously. Right now, pills exacerbate his nausea. The current plan is to remove Benjamin from IV hydration tomorrow afternoon, 24 hours after his medication, and leave him unhooked for 8 hours or so to see how well he hydrates on his own. If that goes well we will do the same all day Friday. I am hopeful and kind of determined that he will also be eating a little by then, not just so we can go home, but because he needs the nourishment. He needs to feel stronger.

After his medicine was administered, Benji slept until almost sunset. When he woke up he was so down. He didn’t feel well at all, and while he didn’t complain, he just seemed sad. I have no idea what he must feel like right now in his body. He’s got an experimental drug targeting his B cells and trying to kill them. His healthy blood cells are all sorely depleted, he has two enlarged organs, and a prolific bacteria that makes him vomit and his stomach cramp around the clock. And tomorrow is his birthday.

I did my absolute best to cheer him up. I was in the middle of a pretty stellar paper airplane show when the nurses started filing in. Several of them who aren’t working tomorrow wanted to wish him a happy birthday. Three nurses had presents for him, and each present was so thoughtful. By the time they left he was laughing. I will always hold big love in a deep place in my heart for these women.

Michael brought a wide variety of things from the grocery store tonight to try and entice Benjamin into eating a little bit. Nothing was appealing to him. We finally talked him into a smoothie from the shop just a block from the hospital. I left Benji with Michael and ran downstairs and out into the gorgeous fresh air to fulfill his request. It felt so good outside.

Benji drank about 6 ounces of a fruit smoothie. He also drank the same amount of a local kombucha a friend dropped off for him. I felt like singing. He still didn’t eat any solid food today, and his belly hurts pretty badly again right now. But I am really hopeful this is a step in the right direction.

Banyan spent the entire day and night with his friends. When we spoke to him tonight on the phone, the first thing he said to Benji was, “Happy birthday in a few hours, buddy!” I hope Benjamin wakes up feeling a million times better. I hope he feels special and celebrated and loved, because he is. So much.