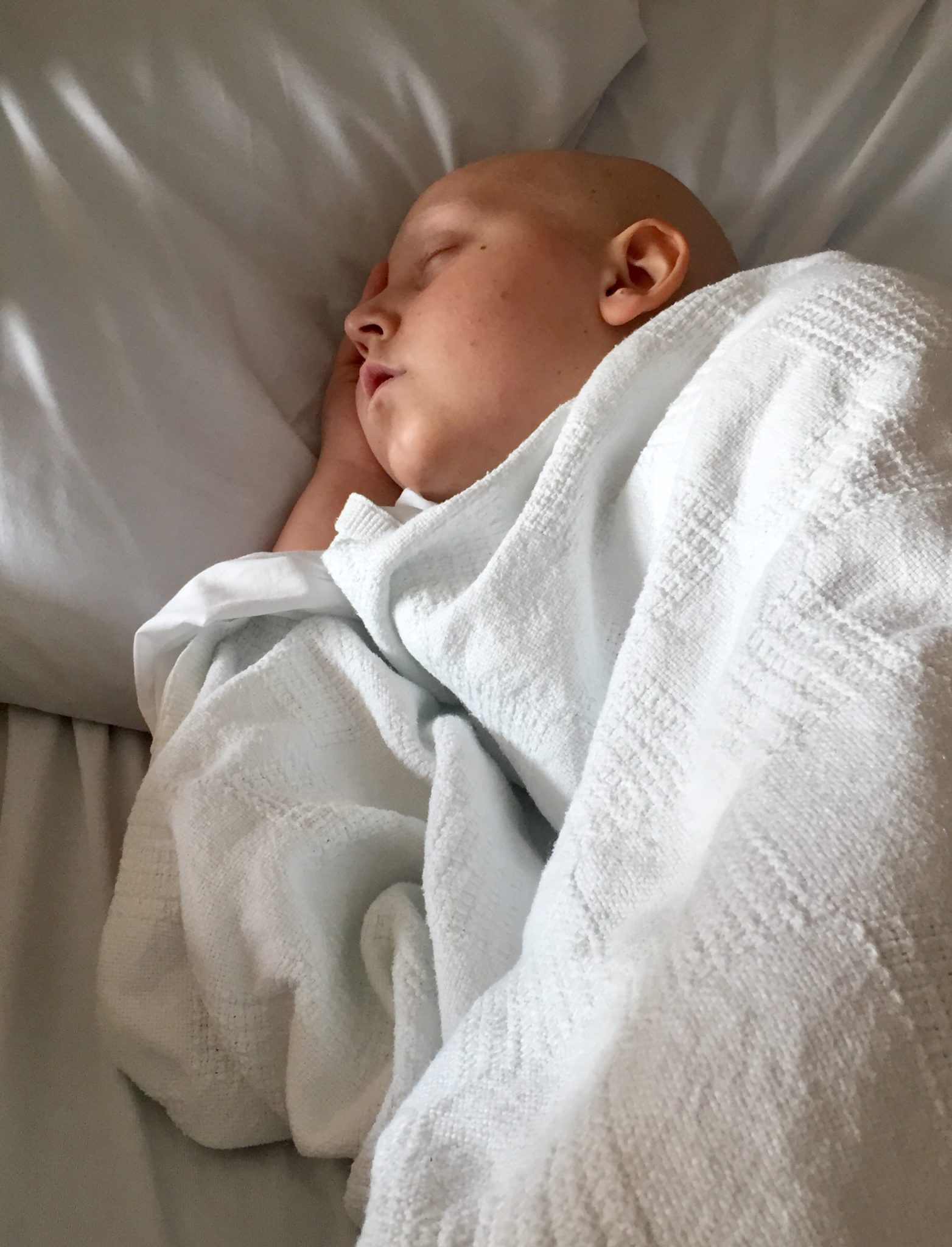 Benji and I were up before shift change again. He was in great discomfort. He begged our night nurse not to draw morning labs–a daily procedure that has never bothered him–because he couldn’t stand the idea of saline flushes. He was so nauseous and in so much pain he couldn’t tolerate anything, no mention of comfort measures, and certainly no medicine.

Finally Benjamin vomited, then found enough relief with heat packs to get his labs drawn and his Kytril going so that he could get into a hot bath with Epsom salt. The moment his body submerges into that water is so beautifully alleviating, for both of us. The bath made Benji feel good enough to take Marinol, which worked to bring him some peace for the next couple of hours. He fell asleep for a rare midmorning nap.

The team is trying so hard to put together the right combination of support medicines to make Benjamin more comfortable. Today we added back in the Scopolomine patch and an intravenous antacid. They discussed switching some medicines from oral to intravenous, others from intravenous to oral, adding some imaging tests, and possibly involving the GI team. Benjamin is only the seventh child to receive Inotuzumab (to the best of All Children’s knowledge), yet abdominal pain has been reported in many adult cases. All of this could be related to C. diff, or it could be a product of the new treatment. By the end of the week we should have our answer.

Benjamin got a platelet transfusion while he napped this morning. It was followed with Ativan, which he’s only had once before; we chose it to reduce his nausea, and hopefully his anxiety, when he woke up to be accessed. His nap was so long. We woke him up to be deaccessed and to have numbing cream put on his chest, and he went right back to sleep. Finally I had no choice but to wake him. He had slept for nearly four hours.

I wanted Benjamin to be awake and have a chance for an unencumbered bath before he had to get reaccessed. When I explained this to him in his groggy state, all of the realization of where he was and what he was about to go through washed over him. His expression was so painful. I only saw it for a second. He covered his face with his blankets, trying to disappear.

Eventually Benjamin made his way to the bathtub and relaxed there for a long time. Once he was dry and dressed, I called his nurse, and he began the long process of getting himself mentally ready for accessing. Our nurse was extremely patient. Benjamin was having such a hard time. He would almost get relaxed enough to count to three (his signal to the nurse), then he would experience a stomach cramp and he would lose his peace. He vomited during this process, and we had to start all over with the cleaning and sterile preparations. Moments like that unravel me. He has to endure so much.

As he does every single time, Benjamin achieved inspirational mental control, and his port was expertly accessed in one try. His nurse placed a new dressing over the site and hooked Benjamin back up to his IV. He vomited again not long after she left. He didn’t stop vomiting all afternoon.

Dr. Oshrine visited us today. We didn’t talk about anything too far in the future. He seemed to lean toward attributing Benjamin’s stomach pain and nausea to the C. diff rather than the Inotuzumab, but time will tell. I also made sure he is on board with the team’s suggestion that we go home for the weekend. He absolutely is. There will be a lot of medicine to administer and monitoring to do, but we can totally handle it. Home can do wonders for emotional and mental health, and they all see the value in that.

We talked about the timing of Benjamin’s return to the hospital and the bone marrow aspirate and flow cytometry we’ll need to determine what’s next. I expected Dr. Oshrine to schedule a lumbar puncture with intrathecal chemotherapy at the same time, but he said he feels it isn’t worth the risk right now. This was a surprise to me. Dr. Oshrine said that while he’d ideally like to have the opportunity for preventative chemotherapy in the cerebral spinal fluid, Benji’s platelets and peripheral blasts make the procedure too risky. The leukemia cells in his blood could infiltrate his spinal fluid, and uncontrolled bleeding would result in a highly complicated neurosurgical procedure. Fortunately Benjamin has never had leukemia in the spinal fluid and shows no signs of it now. As nervous as the lack of intrathecal chemo makes me now, we have to trust these kinds of risk benefit calculations.

Before Dr. Oshrine left, he and Benjamin discussed thier favorite magic tricks. Dr. Oshrine treated Benji to an impromptu juggling act. It was kind of awesome.

Michael and Banyan arrived later than usual tonight. Fortunately, Benji had a reprieve from vomiting while they were here, but his stomach still felt awful. He didn’t eat anything for the second straight day. He did get some kombucha down, which will help balance his bacteria, but his stomach was not cooperating with anything else. I am hopeful this will start to resolve as the C. diff disappears.

Tomorrow Benjamin will get his third and final dose of Inotuzumab for this cycle. After two doses and two weeks, his peripheral leukemia blast count has gone from 86% to 16%. That’s really pretty remarkable. I refuse to think about next week’s bone marrow aspirate and flow cytometry; every time I drift in that direction, my fear makes me feel too guilty to continue. When I focus on the now, on the 70% decline in blasts, on the brave and solidly strong boy next to me, everything feels so much better.