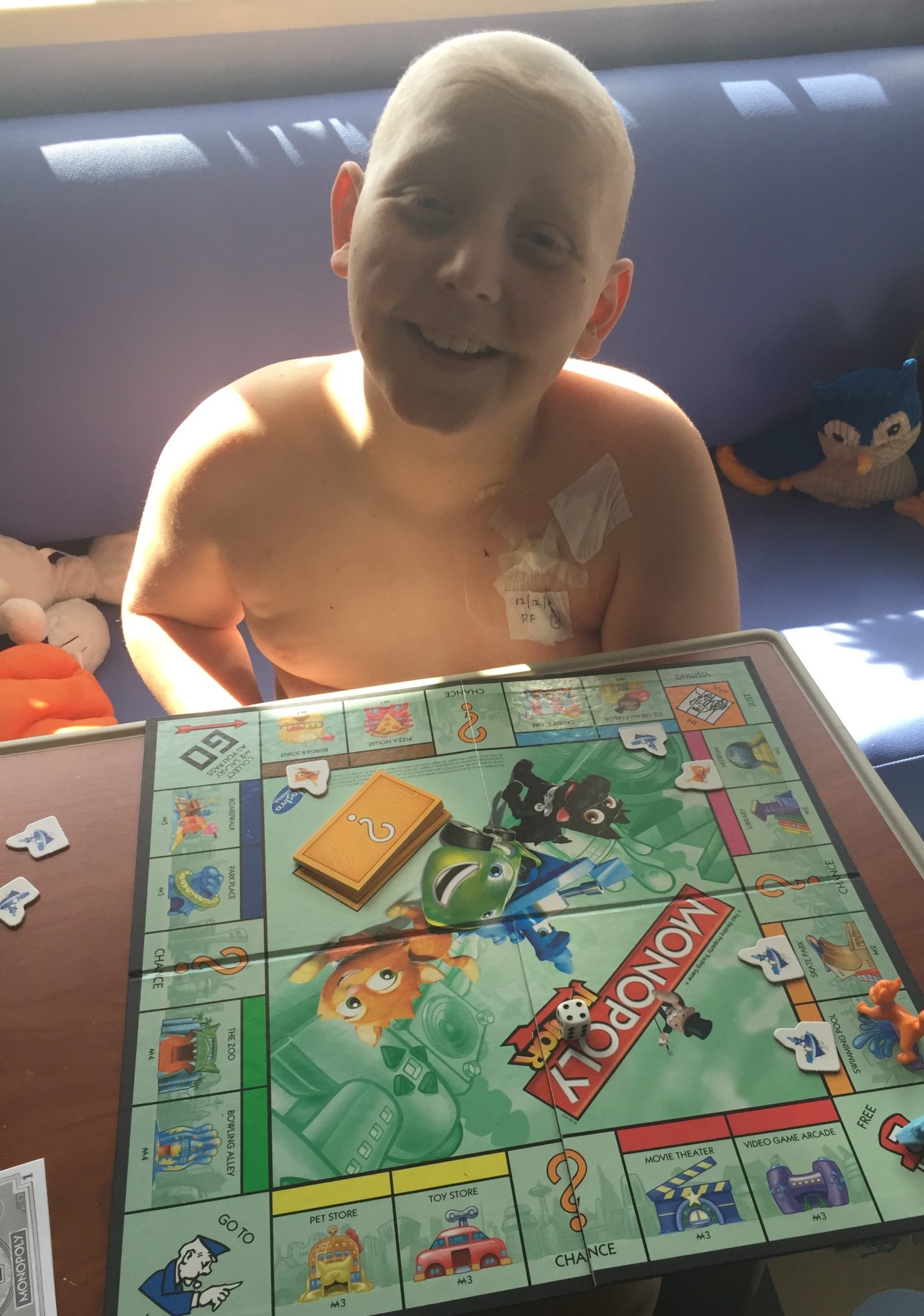 Benjamin and I slept well last night and were both awake at shift change. His numbers are holding steady. Saturday’s increase may have been sample bias, I don’t know; but since then we’ve seen the slow decline we’re used to from Inotuzumab. Each time I walk to the computer and look at the blasts category, I take a deep breath. It’s such a good feeling to see the numbers heading in the right direction.

Benji did not need any red blood cells or platelets today either. It’s the first two day span I can remember in quite some time without blood products. Benji’s port was due for reaccessing today, but because his platelets were just above the threshold for transfusion, the team decided to postpone the procedure until tomorrow to see what his platelets did on their own. Benji was very pleased with this decision. His whole body relaxed.

Our day’s beginning was slow and sweet. Benji didn’t even feel the need to take his morning Marinol. He went to the couch and sat in the sunshine with me. We played Monopoly and laughed and he didn’t complain of pain. Unfortunately, his morning was punctuated with a bout of diarrhea that raised a red flag with me. I ran out of the room to grab a collection basin. We gathered a sample and I called our nurse to send it to the lab. We’ve done this so many times. They sometimes test for other things, but they always test for the bacteria Clostridium difficile, which commonly infects the intestinal tracts of immunocompromised people. We’ve never had a sample test positive. Until today.

A positive C. diff test means that Benji has to take a strong antibiotic three times a day for two weeks. It means that every hospital employee that enters our room has to wear a gown and gloves. It means that anyone who leaves our room has to wash hands first. And it means we are on isolation for two weeks. As annoying as this development is (especially for Benji, goodness knows), I am hopeful it is actually a blessing. If this is the cause of Benjamin’s persistent belly pain and nausea, then this new medicine should act to make him much more comfortable.

Almost on cue, Benjamin’s belly pain returned. It culminated in an early afternoon emesis. He followed the episode with his first dose of Marinol for the day, which bought him a couple of hours of relief, then he took a late afternoon nap. His body was exhausted.

I used Benji’s nap time to clean our little space. The presence of the bacteria was a pretty motivational tool. I purged our many piles and gathered a wagonload of things for Michael and Banyan to carry home with them later. I also took care of some business phone calls and paperwork I hadn’t been able to get to for a while. I felt mentally equipped to tackle it, which isn’t always the case.

The wagonload served another purpose. Our nurse practitioner is bound and determined to get us home this weekend. I have many questions about how this might work that are still unanswered, and I have no expectations. But she is making such a strong case for it with the rest of the team that it’s hard not to get a little excited.

Michael and Banyan spent the evening with us. Banyan was so much more relaxed now that he’s got a break from school. We all just existed in the same space together which feels so good. Benjamin still hadn’t eaten all day, so I encouraged another dose of Marinol, hoping to get a small meal into his system. He took the Marinol but it didn’t have the same effect as it has in recent evenings. His belly pain returned more quickly, and his appetite did not. After Michael and Banyan left for the night, Benji vomited.

When his stomach was emptied yet again, Benjamin asked for yogurt, which is so amazing to me. It’s all he wanted to eat, and it is one of the few foods that can help restore healthy bacteria in his gut. He also drank a bit of kombucha. If we can keep this regimen up, along with the medicine, I’m hopeful he will start to feel better quickly.

Tomorrow Benjamin will have his port reaccessed. He may need a transfusion first. Otherwise it should be a slow day. I hope for more pain relief and moments of sitting in the sunshine while his body continues his hard, incredible work.