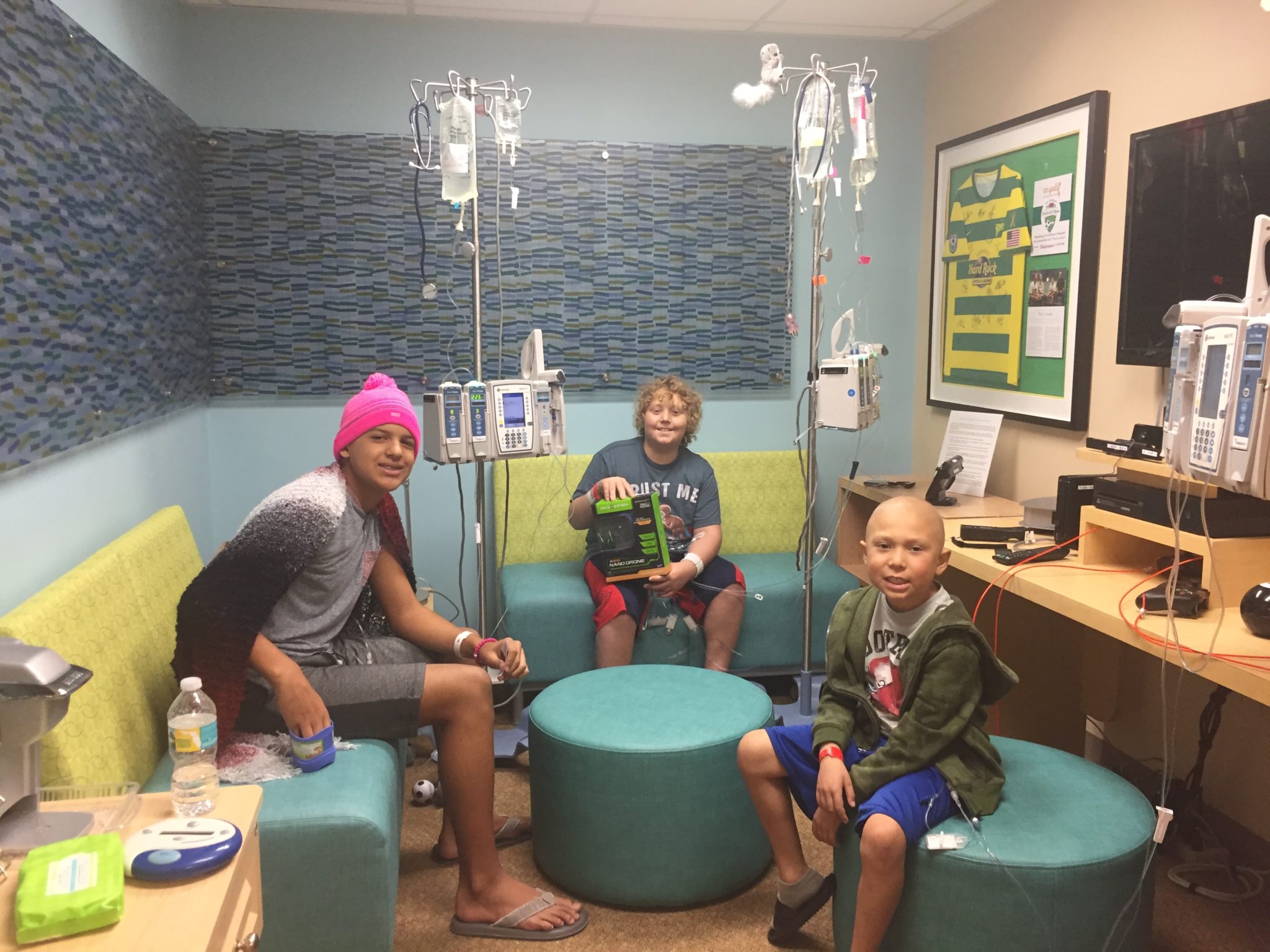 Benjamin slept well last night. I woke up at shift change and nervously looked at his lab report. It looks like yesterday’s blast number was indeed a product of his steroids. Today’s numbers were more indicative that the Blinatumomab isn’t working, even at this higher dose–at least not yet. His blasts are up to 54.3%, his platelets got a small boost from yesterday’s transfusion (up to 12,000), and his hemoglobin is down to 7,000. There was also another number in the red category today that I’ve never seen before: fibrinogen, a protein essential for blood clot formation.

Michael called to get the morning update. While we were talking, he dropped Banyan off at school. I heard him say goodbye to our sweet boy, sending him off into his day with love, and making sure he had his bag of canned goods for the food drive. My heart swelled. My husband is taking such good care of our life back home.

Benji’s belly hurt really badly when he woke up. Food tends to make this pain go away, little bits at a time. He took some antacid and ate a couple of crackers. His pain dissipated and he was off to the races, walking down the hall to find his new friend Ethan. They set up a date in the teen room, and another little boy joined in. Ethan’s mama and I were happy to give the boys some independence while we chatted over several laps around the floor together.

In the afternoon our nurse drew more blood to test Benji’s clotting levels again. His fibrinogen and prothrombin levels were both still off, which apparently can happen with Blinatumomab. The doctors prescribed oral Vitamin K and intravenous cryoprecipitate.  The latter is yet another blood product, separated from donor platelets. He’s never had it before. It was be his 37th transfusion.

We were also visited by a nurse practitioner from the plastic surgery department. With sedation on the horizon for Benji for his upcoming bone marrow aspirate and lumbar puncture, we are trying to coordinate the skin biopsy Dr. Tabori requested for his CMMRD consortium. We discussed it briefly and they left the room. All of a sudden, Benji started to cry. He remembered consenting to sending blood to Canada. He did not know about the skin biopsy.

I felt terrible. This was my oversight. It is really important to me (and obviously to him) that he understand the things that are being done to him. I explained the process and told him he’d be under anesthesia when the biopsy was done. I told him that it would help the Toronto doctor with his research, but if we learned the biopsy would have residual pain, or for any other reason, Benjamin could absolutely decline. I sent an email to Dr. Tabori and to plastic surgery and let them know his concerns, and asked for as much specificity as possible on how the procedure would be done. Benji will make the decision.

Since Benji’s morning labs were relatively consistent with his bloodwork before the Blinatumomab increase, Dr. Mayer decided to wait until tomorrow’s labs to ascertain a trend and decide whether to do his bone marrow aspirate tomorrow or next week. He will likely need platelets and probably red blood as well before that happens.

I really want to give Benji medicinal mushrooms. The research I have read is extremely compelling and suggests the certain fungi can enhance natural killer cell function by interacting with cell surface receptors, just like Blinatumomab is designed to do. The beta-glucans in some mushrooms also have shown anticarcinogenic activity. I gave them to him during maintenance to support his immune system. But even the most progressive oncologists would not approve such a supplement concomitantly with such a new medication.

Michael arrived while I was researching the mushrooms. He was hesitant also, and his instincts are strong. Dr. Mayer came in to examine Benji and discuss things with me. She explained the cryoprecipitate and fibrinogen in greater detail, and mentioned that their decline could be indicative of a greater response. I asked if she meant a cytokine response, and she said yes. So while it could point to a potentially ongoing problem, and not one we want Benji to have, I can’t help be encouraged by any sign that the Blinatumomab is having some effect.

I also mentioned the mushrooms to Dr. Mayer. She asked me to at least wait until after the morning labs. She wants nothing to be skewed from what the Blinatumomab alone is doing. And after she explained the dangers of deficient fibrinogen in greater detail, I wholeheartedly agreed–reishi specifically can thin the blood, and we don’t need that at all right now. The mushrooms can wait.

When I came back in the room after talking with Dr. Mayer I saw a piece of paper on the counter. “PEDIATRIC ALL TESTING: B-ALL Fusion Detection.” The test was an order for 4mL of Benji’s blood, to be taken during tomorrow’s blood draw, and sent to Columbus for testing. Dr. Mayer hadn’t mentioned it. The nurses couldn’t explain. A quick search told me the test was searching for “an alternate kinase fusion in the absence of a classical, BCR-ABL1 rearrangement.” They’re trying to figure out what is different about Benji’s leukemia cells. Why are they resisting? This test, plus the bone marrow aspirate results, will combine to give Benji’s doctors as much information as possible.

While Michael was here we were also visited by the Bone Marrow Transplant Counselor. She said that there had been two potential matches they’d pursued for Benji in the registries. Unfortunately one of them didn’t turn out to be a perfect match. The other had been contacted for high resolution typing, but we should assume that Michael will be Benjamin’s donor. I nodded distantly through the conversation, not only because we’d already sort of assumed as much, but also because transplant seems so far away right now.

So the plan is to check Benji’s labs in the morning and decide whether to proceed with an aspirate. As I said to my new friend on our walk around the floor, if I look too far ahead, I get a little crazy. If I look at the boy in front of me, everything is perfectly fine. We played spoons with our new friends. He flew a drone in the hallway. The nurses had a balloon swordfight in our room. We shared another delicious meal with our family. He was super tired when he went to sleep, and he had one or two more complaints of bone pain, but overall he’s doing so, so well. He had another strong and happy day.