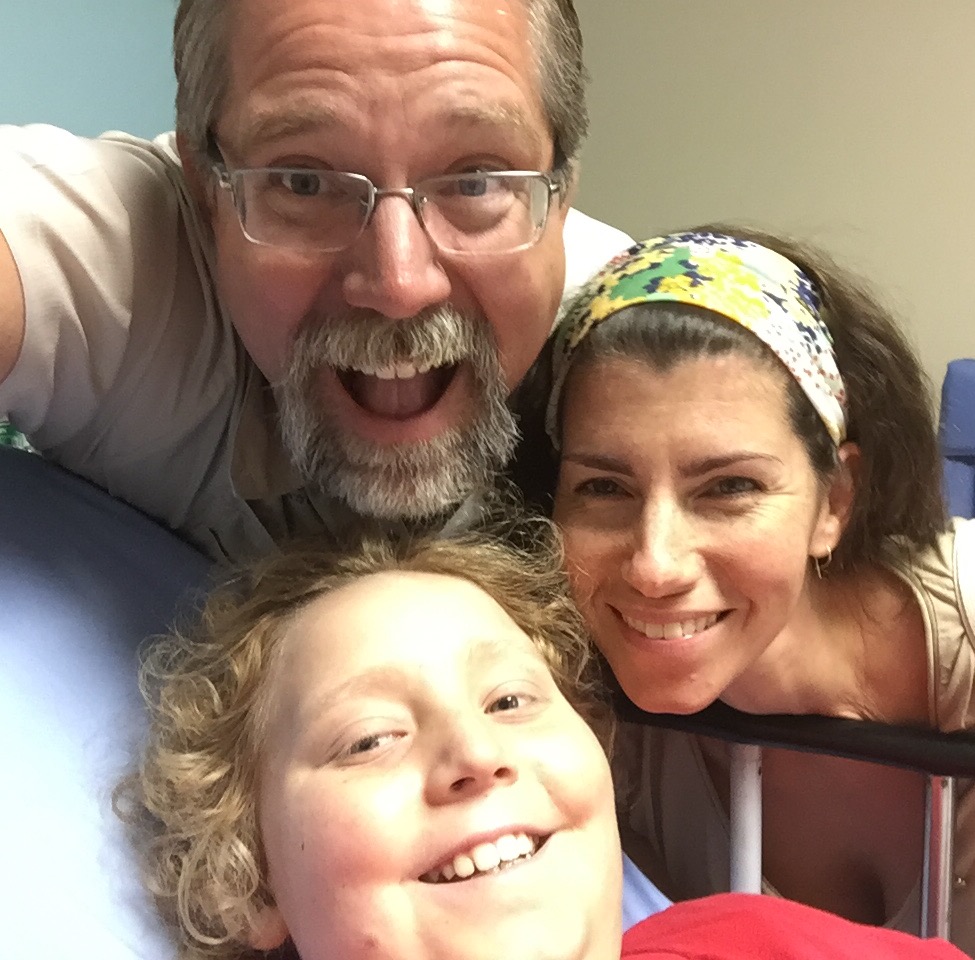 This morning’s labs showed another huge increase. Eighty percent of Benjamin’s peripheral blood is infected with leukemia. It’s higher than the day he was diagnosed. I had prepared myself for the probability that the Blinatumomab wouldn’t work at the higher dose, but the number on the screen was still a harsh punch to the gut.

The ball was rolling early to get Benji’s body ready for his bone marrow aspirate. It’s almost certain the sample they’ll collect will be nearly 100% infected. They’re just looking for surface proteins now. I’m not even sure what to hope for. The mutations and proteins and all of that is so far over my head; once the research studies start including Greek letters and exponents, I have a hard time keeping up.

Michael and I decided not to tell Benjamin about the possibility of Philadelphia until we get the aspirate results. Right now, he just needs to feel strong and happy. He’s good at that. He need not worry himself with details and questions we may not be able to answer.

Benji’s color is reassuring. Aside from his many bruises he looks beautiful and healthy. He is sweet and quick-witted and funny and insightful. He is getting a little more tired, though. He went to bed early last night, nestled perfectly in my right arm, and went back to sleep this morning after his platelets were hung. Transfusion 38.

Our care team is thinking very creatively. I appreciate each of them. They are working hard to devise the best possible plan for Benjamin and all of his unique nuances. Dr. Mayer came in for rounds this morning and gave Benji a thorough examination. I stepped outside with her.  I asked her at what point she would consider chemotherapy to manage Benjamin’s disease level until another path is made clear. She said that we aren’t there yet. Even though 80% is daunting, she is more concerned about the overall white blood cell count, which actually dipped a little today. A small comfort.

Benji’s doctors need to have enough disease in the marrow to be able to accurately assess what’s there before they blast it with new medicines Benji hasn’t seen yet. From what I understand, these medicines wouldn’t have the intention of eradicating the disease for good, just of keeping it at bay until the treatment he needs is available. This ultimate treatment will be determined by today’s blood and marrow tests. They will reveal what therapies will be best suited to combat Benji’s particular leukemia cells and reduce his chance of another relapse.

I asked Dr. Mayer what would happen if the aspirate showed two kinds of leukemia cells, one populus with CD-19 protein and one without. She said she wouldn’t be surprised at all if that’s what they found, and it would probably lead to a kind of dual therapy. We’re still not sure, geographically, where that would be. I also asked if they would stop the Blinatumomab, as it is clearly not doing what it was intended to do. Again, we need to wait and see what the aspirate holds. The immunotherapy may be serving a purpose, if only for diagnostics at this point.

Michael came up to be present for Benji’s bone marrow aspirate. His team at work has been so stellar in supporting him and allowing him these days. Once Benji’s platelets were finished dripping, another level was drawn to be sure he was ready for the procedure. The platelet count was lower than surgery typically likes, but Dr. Mayer approved it and we were taken downstairs. Our wonderful pre-op nurses were waiting for Benji with big smiles. They had even sent a bag of treats to the room to be there when he returned.

Benji kissed Michael goodbye and I walked with him into the surgery room. This time, he rested on his right side, so that Dr. Mayer could take the aspirate from his left hip. It positioned him to see the large syringe of propofol the anesthesiologist was using to put him to sleep. Benji said, “Don’t you think that’s a little excessive?” Everyone laughed. Benji told jokes until he couldn’t anymore. He gave his telltale yawn. I whispered sweet dreams, and walked out of the sterile room.

We were called back after a little more than an hour and told that the aspirate had gone smoothly. Benji was very sleepy. He complained only of pain on his lip; it was swollen, and looked like he’d bitten it during his sleep. I asked the anesthesiologist if they’d done anything to his mouth. They hadn’t. We were free to go upstairs, with Benji pushed by a very gentle transport technician.

The dressing on Benji’s bone marrow aspirate site was loose. It had fallen off by the time we got back to the room. He was actively bleeding. Our nurse carefully redressed the site, then we transferred him into his bed and got him comfortable. He slept for the rest of the afternoon. When Benji woke up, it was his lip that hurt more than his back, but both were quite sore. The evening was calm, restful and quiet.

At one point I left to stretch my legs and walk a couple of laps around the floor. I saw a social worker who had clearly had been briefed on Benji’s status. She kept speaking with such sympathy in her voice, but I just wasn’t going there. There is a path forming and it does me zero good to focus or consider anything else. Conversely, tears find me in unexpected moments, like when our favorite pre-op nurse noticed the number of bruises on Benji’s legs.

Tomorrow will be an illuminating day. The results of Benjamin’s bone marrow aspirate will be in, and his path will begin to reveal itself.