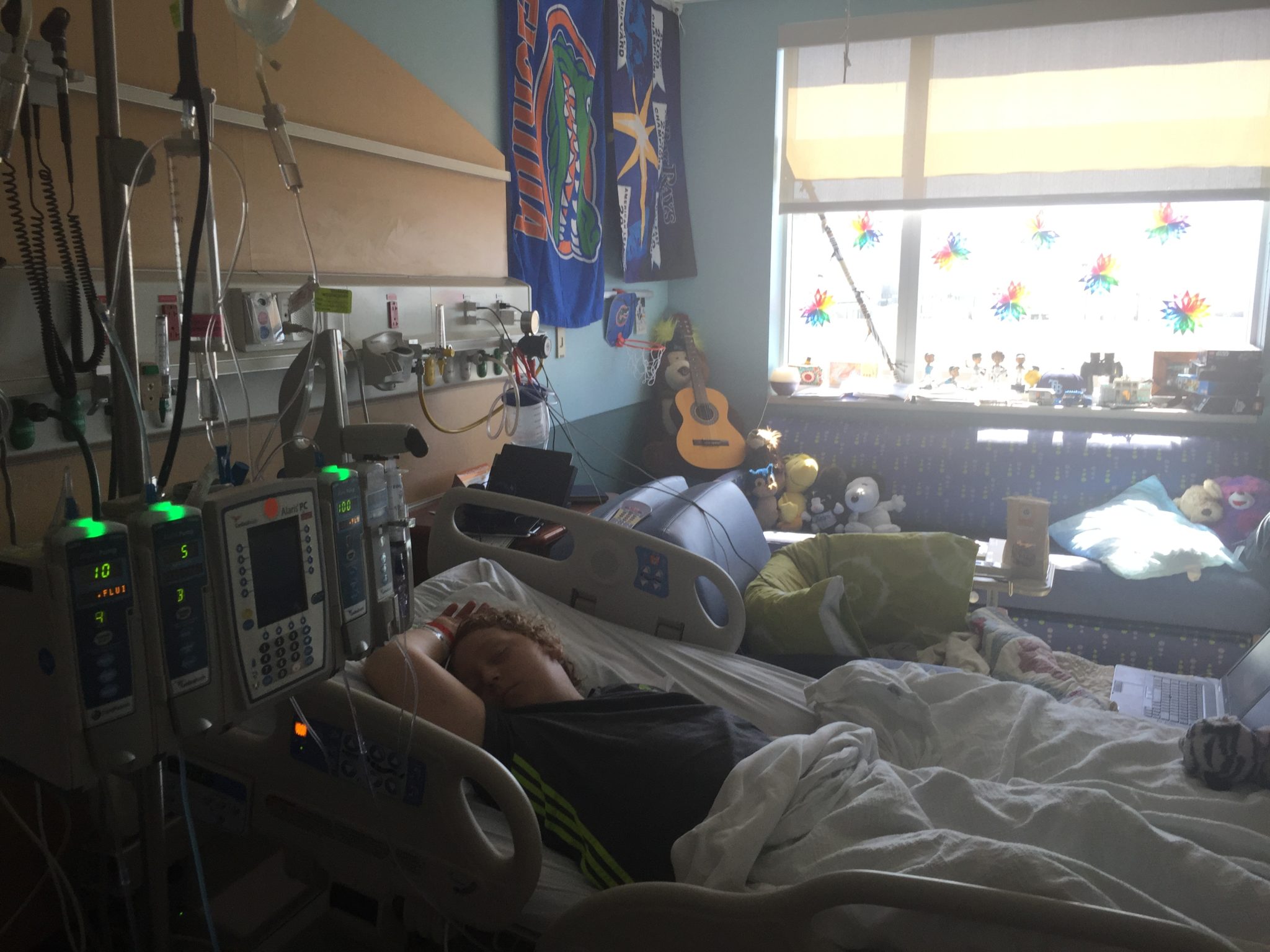 Benjamin’s day began at 5:30am, when our night nurse came to deaccess his port. He was sleepy but kind, and understood the plan. The nurse used a fast acting numbing cream and gave him fifteen minutes before coming back in to access. With the cream and dressing on his port, he went back to sleep. I brewed my first cup of coffee, preparing for vigilance.

Benjamin had to be accessed three times. It was the most traumatic port experience to date, by far, and it compromised the “continuous infusion” parameters of the Blinatumomab by an hour and a half, rather than fifteen minutes. Our nurse was skilled and kind, but Benjamin’s port was not cooperating. I believe it has gotten “looser” and more deeply set over these many months of use. During the first attempt, Benji flinched his shoulder back while she was accessing, just a tad, but the port slipped after the needle went in. He was in pain. She knew she’d missed and removed the needle immediately. The second time, the charge nurse was in the room with us. When our nurse missed again, they tried to manipulate the needle despite Benjamin’s intense reaction. I had to raise my voice. I know they were trying to prevent a third access, but something was clearly wrong. They finally removed the needle again. The charge nurse decided to call the IV team.

With each new access, I witnessed my boy achieve such beautiful peace and courage. He is absolutely stunning to watch in these moments. His pain and anxiety is so visceral and all encompassing, yet he composes himself anew, not abandoning his well of strength but reinforcing it at each draw. Some nurses are more impatient than others, rushing him along. This is the only place in the process at which I can truly help him. I make sure the impatient ones know they can just pipe down. He will tell them when he’s ready. He always gets there, and he always lets them know. You’re stronger than the pain.

The same sweet nurse from the IV team who inserted Benji’s peripheral line was there for us this morning, and he was finally successful in accessing Benji’s port. He was so patient that his fingers went numb as he held the perimeter of the device beneath Benji’s skin, waiting for Benji to let him know when to proceed. He didn’t even so much as give Benji an impatient sigh. He respected Benjamin completely and held the space for his process. I know that made a huge difference. Benji and I both cried when we saw blood return.

The floor nurses came back in to hook up Benji’s tender central line to his new, maximum dose of Blinatumomab. I have an oddly positive feeling about this. Yesterday’s renewal of awe worked wonders for me. Benjamin’s body is amazing. His spirit is even stronger. Benji played games on his iPod for the first few minutes of the infusion, then decided he’d been asked to do entirely too much this morning, and went back to sleep.

Optimism aside, it’s time to mobilize things toward a CAR-T cell trial, should that become necessary. I sent Dr. Oshrine an email with other clinical trials I’d found and and asked about other centers that are on the CAR-T study. He feels strongly that since Seattle and Philly have the most established programs, we should choose one of those. I spent the rest of the morning searching for studies published by anyone at either center pertaining to Benjamin’s unique profile, and requesting moms’ experience in the two hospitals so that we can move quickly on one of them if we have to.

Benji’s morning labs held a mix of encouraging numbers and expected trends. His platelets were at 4,000, lower than the day he was diagnosed. A transfusion was ordered. His blast number, however, plummeted way down, to 12%. This could be a product of his increased hydration diluting the sample, or, as Michael reminded me, a result of last night’s Dexamethasone burst. It may not be a reliable number, but it sure was good to see it on the screen. Going into this high dose of Blinatumomab today, the lower the number of leukemia cells, the better. (This is true at any time, obviously.)

The next bone marrow aspirate will be very telling. If Benji’s peripheral blast numbers decline, we will wait to do the aspirate until Tuesday with his regularly scheduled lumbar puncture. If the blasts increase, he will have the procedure this Thursday. The aspirate will be looking specifically for a mutated population of leukemia cells that may be resistant to Blinatumomab, theoretically because of a lack of the protein CD-19. This breakdown will inform the team, here and at a potential future center, how to target therapy.

Benjamin slept until after noon. I kept watch over my sweet boy who handled his new dose beautifully. His color looked off–pale, sallow skin with dark red circles around his eyes–but I expected a little of that because of the steroids. His vital signs, neuro checks, and blood chemistry panels looked perfectly normal, and his bladder issues seem to have resolved, thankfully.

We took a lap around the floor when Benji woke up. He wanted to visit his new friends. We only had a few minutes though; once it was clear that he wasn’t going to have an immediate reaction to the Blinatumomab increase, it was time to hang his platelets. I hope they are absorbed more successfully into his marrow than the last bag. His body is quite bruised.

While the nurse monitored Benji’s vital signs, I ran downstairs to pick up his lunch. I rode in the elevator with a father and son who were there for a post-transplant checkup. The dad was smiling the whole time. Through our conversation I learned his son had been there for Blinatumomab, and a subsequent bone marrow transplant. I told him that Benji was here for Blinatumomab also, but that we weren’t sure it would work. “Aw, no ma’am, you’ve got to believe. Never give up hope. Never.” His eyes were tearing as he looked down at his son. I nodded in agreement and felt relieved to observe that I have not done any such thing. On the contrary, I feel a new confidence.

At each of the scariest steps in this process–diagnosis, increase in risk status, Methotrexate toxicity, relapse, failed reinduction, and now the possibility of failed Blinatumomab–we have felt the freefall of fear. But we always land on solid ground. I felt like I landed today, and hit the ground running to take action toward this potential new path. Benjamin feels strong and brave. I can too.

Dr. Oshrine came to see us after lunch. He sat in our room for a long time. He explained the mechanisms of cellular proteins, the way cancer cells form and hide from our immune systems, and how different types of immunotherapy medicines function to seek them out when chemotherapy can’t. I gave him some research I’d found about one such therapy, a PD-1 inhibitor, and its success in CMMRD patients with other cancers. He found the research compelling, though he thinks it would be difficult to get any kind of financial approval for the medicine for Benjamin, since there is currently no study using it for leukemia patients, CMMRD or otherwise.

All things considered, Dr. Oshrine still feels firmly that the CAR-T trial will give Benjamin the most proven chance of success if the Blinatumomab doesn’t work (provided the bone marrow aspirate reveals the “right” kind of protein on the cells). He and Dr. Tabori had both been in contact with the doctors in Philadelphia, and Dr. Oshrine with Seattle as well. Through our conversation it became a little more clear that Philadelphia would make the most sense for our family. Dr. Oshrine is moving forward with the necessary insurance and financial pieces for us to complete. If this higher dose of Blinatumomab works, we can cancel Benjamin’s spot. If it doesn’t, we could be relocating to Philly within a couple of weeks.

Benji doesn’t know yet that this transfer is a possibility. I see no reason to keep him focused on anything but feeling strong in his body at this present moment. If his path leads northward, we will know when to have that conversation, and we will be honest and open as we always have been. But for now, we have a path to walk here, one that still holds hope.

Michael came to be with Benjamin after work today, while Kathy and Gana spent the evening with Banyan back home. I called my sweet older boy to hear his voice and talk about his schoolwork. He sounded wonderful and happy. Benjamin continued to tolerate the increased dosage of Blinatumomab throughout the day. He has had no evidence of cytokine release. He has complained twice today of what I believe was bone pain, once in his heel, and once in his back. But overall, Benjamin had another strong and spirited day, one that began with such bravery that just by witnessing it, I am empowered to march confidently down whichever path points toward his healing.