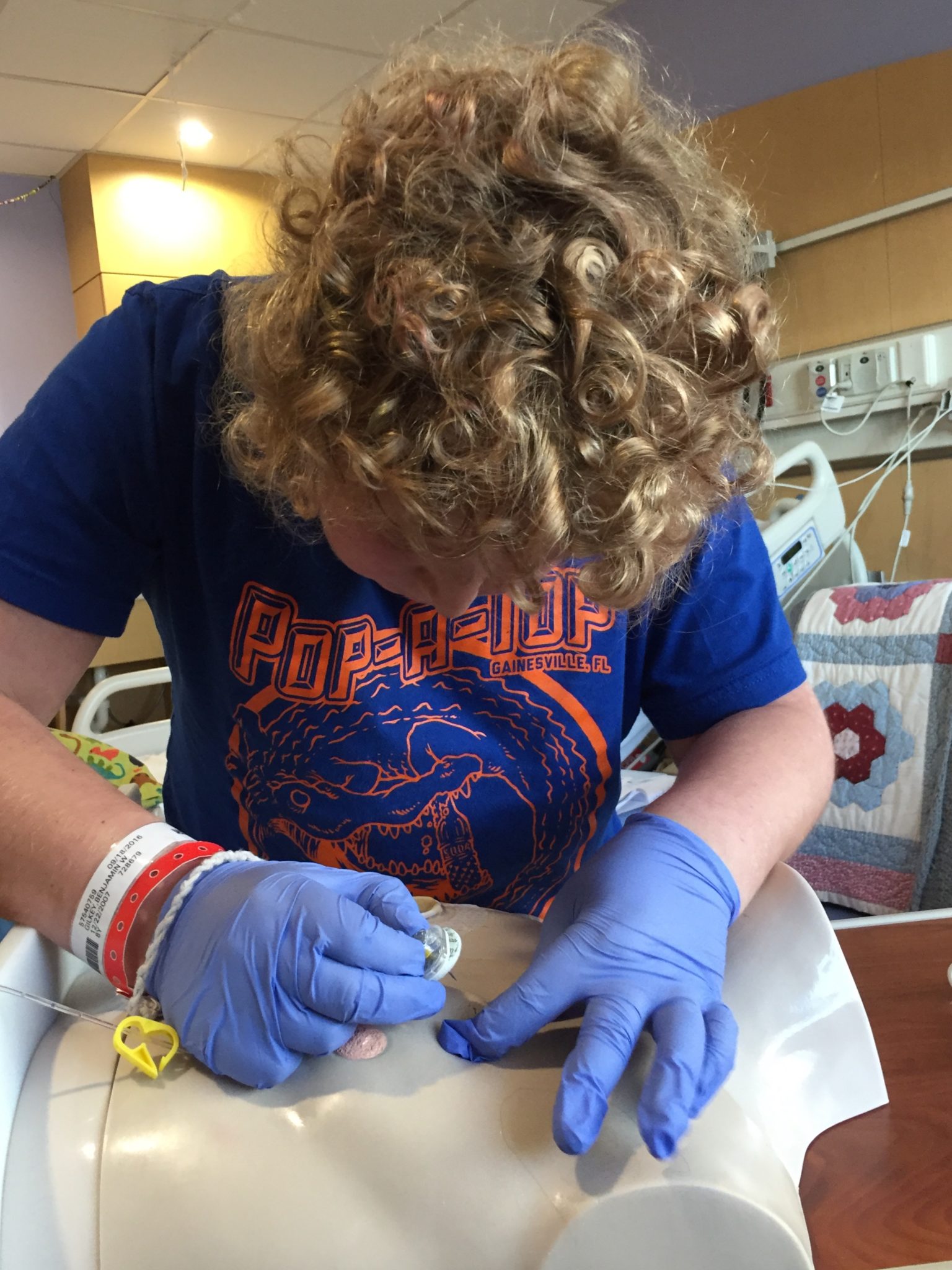 Benjamin woke up in the middle of the night with low belly pain. I asked him to describe it as he was falling back to sleep, and he said, tearfully, “I just don’t feel good.” I wasn’t sure how the day would progress. Thankfully he woke up feeling just fine, and continued feeling great all day.

Benji also woke up unhooked from his fluids. We decided at shift change last night that the nurses would go ahead and heparin lock his line during morning labs, while he was still asleep. It was a nice feeling for him, to wake up and get out of bed in the normal way, without worrying about his IV pole.

During morning rounds we learned that Benji’s absolute neutrophil count (ANC) had only inched up to 40. It has barely moved. It’s frustrating because we want to go home, of course, but I’m not inclined to rush things. It makes sense that Benjamin’s marrow is still suppressed. We are just entering the nadir period from his last IV chemo; the medicine is still working. Perhaps by the weekend we’ll see a nice climb.

The numbers today did give us clarity on tomorrow’s plans. Benji’s marrow is nowhere near ready for an accurate aspirate, so we will move forward with his lumbar puncture only on Day 29, tomorrow. We will still get to go home when Benji’s ANC is 200, and we will return to clinic next week for the aspirate as an outpatient procedure, once a clear upward trend and nice sample can be obtained.

Also during rounds we learned that Benji’s platelets have dropped down to 11,000. They need to be above 30,000 for lumbar puncture procedures, so tonight at 3am, Benji will get a dose of platelets. It will be his 32nd transfusion since diagnosis and his 13th since relapse. Blood donation has taken on a whole new level of importance to me. A representative from One Blood came to visit Benji today and brought him a huge card signed by the whole company, along with a bag of One Blood gifts and a batch of homemade cookies. There is another blood drive and bone marrow registry being planned in Benji’s honor soon. Benji will receive many more transfusions during his bone marrow transplant. I am grateful for every donor and will do all I can to help One Blood increase their supply.

We spent a good portion of today getting caught up on Benji’s schoolwork. He did such a great job. He was focused and productive and we can easily take tomorrow off. His teacher has been so helpful, updating his tablet regularly and sending him specific instructions. I’ve updated her as well with a list of all he’s accomplished. I’m thankful this is something that’s coming easily for us.

Benji also took many laps around the floor today, with our wagon and without. His hair is continually falling out as he walks. It covers his shirt. He notices, of course, but just like the first time, he doesn’t seem to mind. He knows it will grow back. He has such a mighty mane right now that it’s hard to tell he’s lost anything at all. He just shakes his head and watches it fall.

We have friends on the floor again. One of our little buddies is unfortunately back, fighting a fever and waiting for her counts to recover. And another Sarasota boy was just admitted, an eighth grader diagnosed with osteosarcoma. His mama and I share mutual friends. We met this morning, just before his chemo started dripping for the first time. I saw her asking the receptionist for a three hole punch. I knew exactly what she was doing. The Binder. I slipped her an extra set of tab dividers, with more love than any tab dividers have ever held.

Our nurse today was awesome. She fulfilled Benji’s request for permission to access the port on the nurse’s practice dummy. It was so cool. The dummy (appropriately named Chester, as it is only a chest) included a real port, latex skin, and a pouch of dyed liquid that simulated blood return. Benjamin wore gloves, just like the nurses, and felt the “skin” for the perimeter of the port, just like the nurses. He accessed the port successfully and pulled back the syringe to check for blood return. He did it again and again. Sometimes he accessed the port directly in its center, and sometimes he hit the wall of it, making blood return difficult. He tried it with and without the Bio-patch. I think it was a really empowering experience for him, and I’m so grateful to our nurse for making it happen.

Benji and I ended our night with some Thai delivery and phone calls to Michael and Banyan. Those two have handled so much with such grace. They make it easy to focus on what is happening up here on 7 South. Tomorrow, Banyan will go home from school with a friend, and Michael will come here to be with Benjamin as he goes under anesthesia. I am really looking forward to the time we will all have together at home, as brief as it may be.