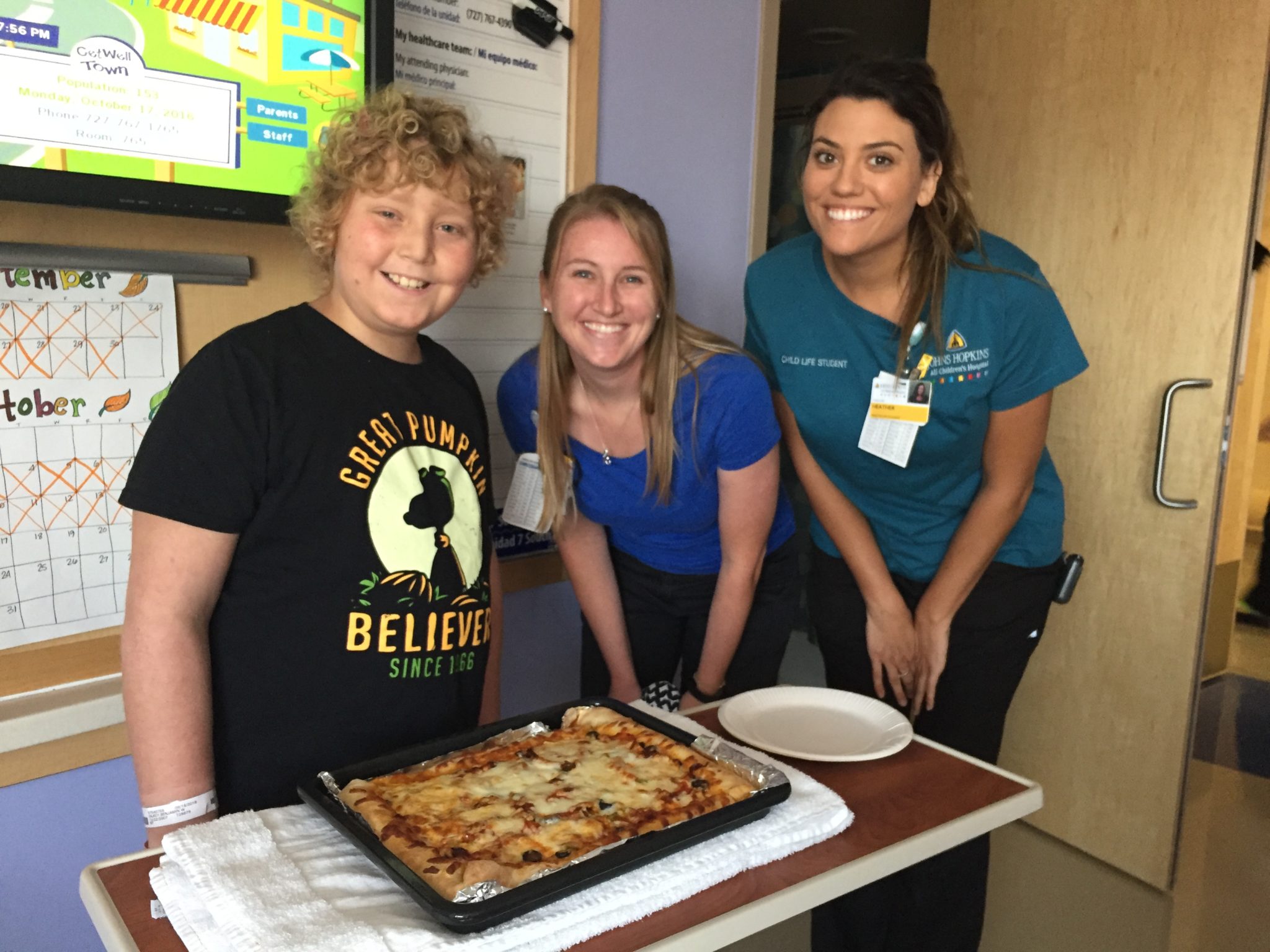 30 was the number of the day today. Benjamin’s absolute neutrophil count (ANC) dipped back down to 30. Not the direction we wanted it to go. This almost certainly means he won’t have his bone marrow aspirate on Wednesday. Today was also the 30th day we’d been in the same room. According to hospital protocol, it was eviction day. If Benjamin’s ANC had risen I may have negotiated, but it certainly seems we’ll be here a few more days. So our morning was planned for us, right out of the gate.

Fortunately, the floor was relatively sparsely occupied this morning, and Benjamin and I had several rooms to choose from. We moved five doors to our east. Our new room has a view of the water, the construction site, the Skyway and the top floor of the parking garage, where Michael and Banyan sometimes flash their headlights at us or get out and do crazy dances. Our room also has a bathtub. That is Benjamin’s one mandatory requisite.

Our nurse fetched us a wagon and we got started. Benjamin carefully loaded up his stuffed animals and moved them to their new home. We were only on our second wagon load when the Child Life team came to find us. They have taken the time to learn about Benjamin’s interests, and found a way to bring a fully functioning kitchen up to him. They bought ingredients for him to make his own pizza from scratch. He chopped the vegetables, rolled out the dough, even stuffed the crust–a trick he learned from his Grammy. He baked the pizza in a convection oven they brought to the floor. He served the pizza to his Child Life friends, nurses, and me for lunch–and it was absolutely delicious.

By early afternoon we were all moved in. I strung up Benjamin’s Beads of Courage, which his nurse updated for me last night, and hung them in our new space. He has 497 beads now, each for a different act of bravery.

Benjamin was extremely active today. He had a ton of energy. For the second day in a row, he was unhooked from his fluids, and could move freely. The pizza experiment was in the conference room, so he walked back and forth from there. He helped me load and unload several times. We took a zillion laps, some walking, some running, some with me pulling him in the wagon. We didn’t sit down until after 4 to do our schoolwork for the day.

While we worked on math, Dr. Oshrine came to see us. We discussed the timeline for Benjamin’s bone marrow aspirate and upcoming immunotherapy phase. Benji’s bone marrow aspirate will depend on his counts. Once we see an irrefutable trend upward, with a few hundred neutrophils, the aspirate will be scheduled. If by Wednesday morning it seems that trend is imminent, we may postpone his scheduled lumbar puncture a day or two so that both procedures can happen at once. If we are still waiting for the beginning of the trend, we will move forward with the puncture and wait until next week to do the aspirate. Once Benjamin’s ANC is above 200, we can go home. If necessary the aspirate can be done as an outpatient procedure.

I asked Dr. Oshrine when he would want Benji back to begin immunotherapy. He said there wasn’t a scientific formula but he’d like to give us a full week at home. I asked if anything would prevent that from happening, and he said only a bone marrow aspirate that revealed a much higher percentage of disease than expected. No one is predicting Benji’s leukemia will be in remission (again) after this phase. But as long as the percentage of blasts in his marrow is in the single digits, we move forward as planned.

Blinatumomab is the medicine that will be continually infused into Benjamin’s body for 28 days during each immunotherapy phase. It works with the body’s T-cells to attack the leukemia cells still in the marrow. The success of bone marrow transplants depends largely on the level of disease when the procedure is conducted. Blinatumomab, the team feels, will give Benjamin the greatest probability for the lowest amount of disease.

Blinotumamab isn’t given during the first phase after relapse because its negative effects correlate with the amount of disease it is fighting. When T-cells attack disease, they release cytokines. If the disease level is too high when Blinotumamab is administered, cytokine levels can be released at toxic levels. Benjamin’s current reinduction phase is preparing him to have a positive response to the immunotherapy. It will not suppress his immune system or even make him feel particularly badly. We’ll just be admitted for the duration of each round.

So now, we wait, in our new room on the seventh floor, for Benji’s body to tell us what to do. He’ll be unhooked from fluids again tomorrow. We’ll catch up on schoolwork. By the evening, we should have a plan for Wednesday.