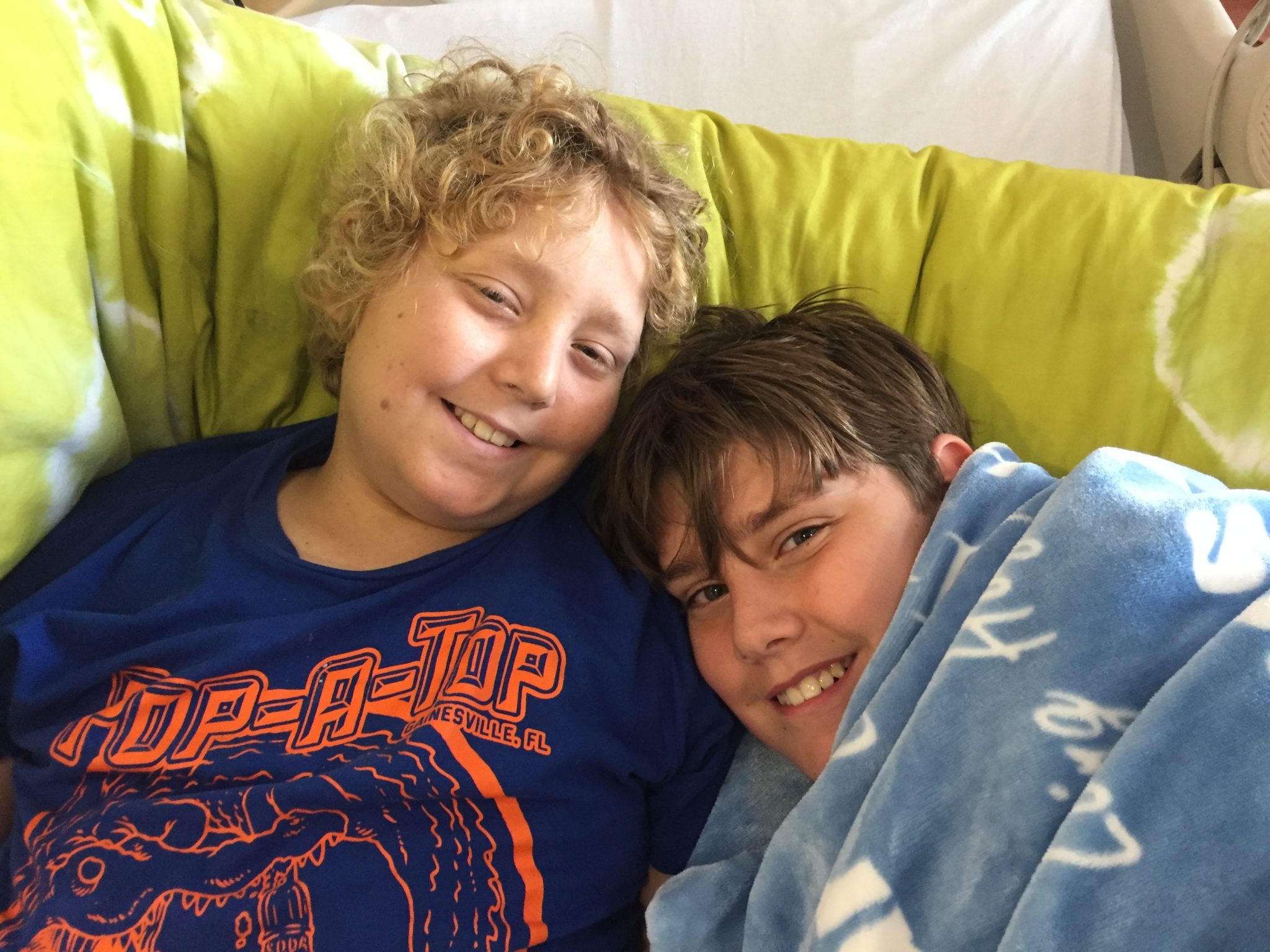 A nightmare woke Benji up today before his nurses did this morning. He was scared and didn’t want to go back to sleep. He returned to reality, nestled into me and said, “I’m glad you’re with me.” Me too, kid.

Benji’s platelets were at 16,000 this morning, so a transfusion was ordered. Otherwise we expected a pretty low key Saturday, clinically speaking, with family keeping us company.

Michael was able to join us early this morning. It was so good to see him, even through the mask he wore to be sure Benji was protected. He brought provisions from home and from the grocery store and settled in to spend time with Benji.

Kathy and Gana took Banyan to his football game this morning. They stopped at our house to play with our sweet dogs and let Banyan clean up a bit, then loaded up another delicious meal and headed this way. Just moments before they arrived, Benji said his stomach hurt. He tried to use the bathroom. Instead, he vomited. A lot.

Fortunately it was an isolated incident. Benji is only four days post-steroids, and his appetite reflects it; it could be the amount of food he ate this morning, or perhaps the nadir periods of his chemo medicines are affecting him in ways beyond his declining neutrophil count. Later in the day, he had another isolated diarrhea episode very similar to Thursday’s. I’m thankful there is no evidence of bacteria or virus, but this feels different than stomach upset he’s had from chemo in the past.

Once Benji was cleaned up and feeling better, we enjoyed a nice afternoon with our family. Benjamin received his 28th transfusion while we played Apples to Apples. He worked on a puzzle with Gana and Kathy served us lunch. Banyan snuggled in with him so affectionately that our nurse was touched, and said “Aw, what a good big brother.” He really is. And Benji’s appetite slowly returned to normal.

Michael and Banyan left, and Benji and I took a couple of laps around the floor. He said his left foot felt tingly. It was the second time today I heard him say so. I watched him walk. He definitely looked flat footed. I wonder if he’s experiencing some neuropathy from the Vincristine. I wonder if side effects are more pronounced during reinduction. Many of these medicines are biocumulative.

My friend whose daughter needs Erwinia shots still can’t locate the medicine. She and our nurses were on the phone all day with hospitals and pharmaceutical companies. There is a chance she just won’t get it until the next time it appears on her roadmap.

I am so upset by this. It could so easily have been Benjamin. And I feel so angry for my friend. I did some digging and found that the CEO of the pharmaceutical company that manufactures the shots makes over $8 million per year. I also found a transcript of the board’s last conference call, during which they discuss the shortage. There were no concrete answers given, except where sales were concerned. In terms of supply, the CEO just said, “All of our efforts for near-term supply really revolve around cooperative efforts with our existing supplier,” which, I can only surmise, aren’t going so well right now.

I don’t know what the answer is, but my friend and I are discussing how best to communicate our concerns, whether with the pharmaceutical company, the Children’s Oncology Group, the FDA, the media, or all of the above. This is so not right.

Tomorrow Benjamin will be deaccessed. He will have at least an hour of freedom before he’s reaccessed again. I hope he gets to enjoy a proper bath, and a peaceful day.