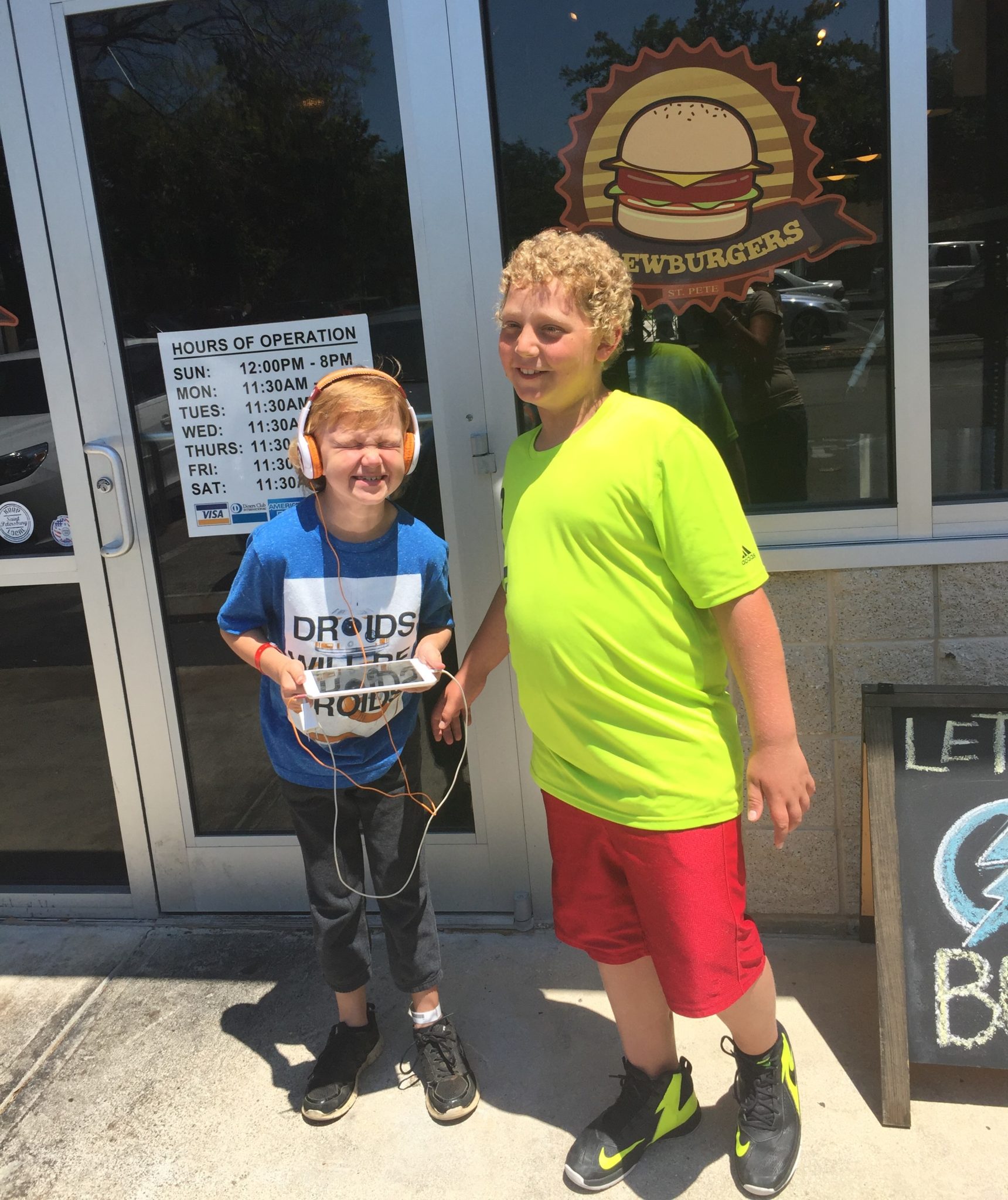 Benjamin and I went over the Skyway this afternoon. I picked him up just before lunchtime, and on the north side of the big bridge, we met up with his buddy Cody and his sweet mama at their family-owned burger joint. Cody had just finished with his clinic appointment and we were getting ready for ours. It’s always so uniquely special and comforting to see them. Cody looks fantastic.

One of the subjects that comes up frequently in conversation between Cody’s mom and me is the discrepancy among doctors when giving advice on practical life through maintenance. The most recurring example is water restrictions, and it’s true nationwide. Some oncologists say yes to oceans and no to pools, and some the other way around. Some say yes to both of those and no to freshwater. I told Cody’s mom that we had asked Dr. Grana about the pools at Disney in preparation for an upcoming trip in June, and that she had felt it would be totally safe for Benji to swim there, because he’s no longer neutropenic and the chlorine levels are regulated. She was relieved. She and her family belong to a lodge with a big public pool and a tall diving board. Cody has been hesitant to go to the lodge because he had been prohibited from swimming there. Today at lunch, his mama made the decision to choose joy over fear. She told him he could use the pool next time they went, diving board and all. The light just spread all over his sweet little face.

I verified the opinion with Dr. Oshrine during our appointment. He said there is no consensus on the subject simply because the studies haven’t been done. But given the criteria Dr. Grana had mentioned as well as the fact that our boys have ports and not broviacs (a different kind of catheter with higher risk for infection), he could see no reason to restrict water of any kind, save perhaps warm freshwater with high concentrations of amoeba and parasites, which we avoid anyway. I called Cody’s mom after the appointment with the good news. She said, “Great. I’m booking our trip to Disney!”

I was grateful that Dr. Oshrine was our guy today. We caught up on his new life as a father of two, then it was down to business. I told him about Benjamin’s reaction to last week’s Methotrexate. We discussed the possibility of a preventative weekly antiemetic like Kytril. He suggested that this week I try reverting to the staggering method, giving Benji’s Methotrexate with dinner and waiting on the 6MP until bedtime, to see if that helps before “committing him to more medicine.” I really appreciated that approach, and that’s what we did. The Kytril is out on the counter and ready, should the morning bring nausea again.

Benjamin’s finger was poked (middle finger, right hand) with nary a flinch. He watched as the blood dripped into the nurse’s vial. Dr. Oshrine reviewed the numbers with us when they came back from the lab: platelets and hemoglobin were perfect as usual, and to my surprise, Benji’s absolute neutrophil count (ANC) actually doubled from two weeks ago. It’s at 3700. He is nowhere near neutropenic. Dr. Oshrine saw the concern on my face and did his best to assuage my worry. He explained that some kids just ride through maintenance with higher than expected numbers; it doesn’t mean his marrow isn’t being properly suppressed. If Benji’s counts are still high in six weeks, he will get another increase in dosage. The highest they’ll go is 150% strength, he said (Benji is at 125% now). He said studies show that maintenance medicines are much more effective if given at a slow and steady pace, rather than in spikes and delays, which makes sense to me.

Benji and I were so excited to be leaving clinic on time that I forgot to grab a copy of his lab report. We quickly walked back to get one. I’ve come a long way from The Binder. We hopped in the car and made it to his baseball practice on time, miraculously. Banyan walked to the office after school, and I scooped him up and took him across town to football. It was another one of those cross-town kid-sport afternoons, and I’m grateful.

We came together tonight to finally decide that Michael would represent us alone at the funeral for our family friend. I wanted to be there so badly; I had clothes laid out and pressed for the boys and rearranged many things so that we could attend. But each of our children have given me serious reasons to stay home, and I need to honor those. We sent Michael northward with our most fervent blessings, and so much love.