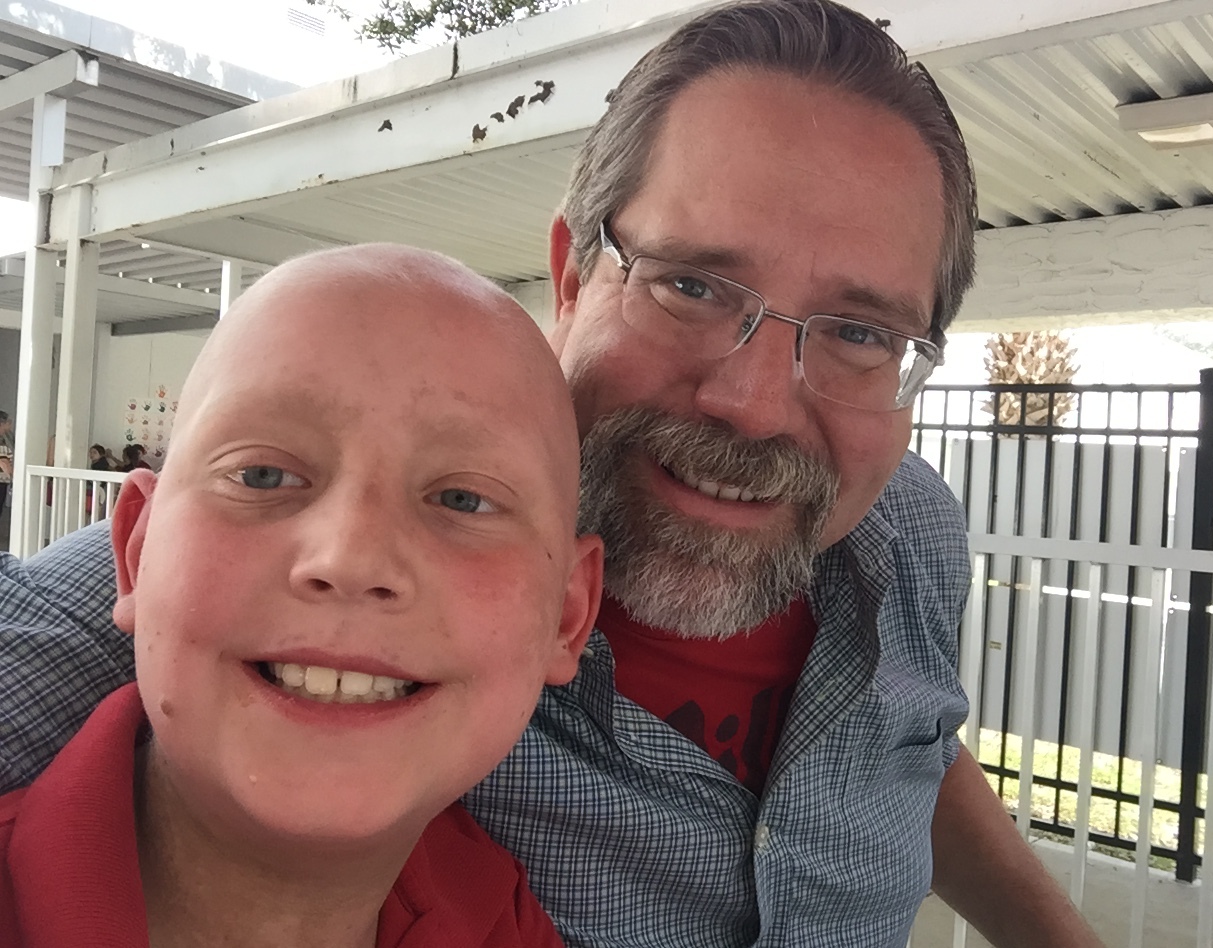 This was an emotionally intense day from start to finish. Benjamin was out of sorts when he woke up, and he said his tummy hurt. I noticed sweat on his upper lip and I took his blood pressure–all was well. My instincts told me that he just went to bed too late last night, and was probably fine to go to school–but these instincts are hard not to second guess. He has leukemia. He just got out of the hospital two weeks ago. Does he need a day off? As the morning progressed and he woke up a little, his ability to go seemed clear. By the time we left, he was happy with his choice, but we had another breakfast battle first. Nothing appealed to him. He finally settled on a granola bar, and we were out the door.

Benjamin and I were invited to be on the news this Friday to share his story and underscore the critical importance of blood donation. He’s had nineteen transfusions to date. I spent some of the morning narrowing down photographs to send to the news station to help illustrate what he’s been through. The hardest ones to look at are from the days right before he was diagnosed. How could I not have known? I wonder if other mothers of children with cancer feel the same way. It was only a single-digit matter of days from bruising to diagnosis, but still…when I look at those pictures, I have so many questions. I looked at every photograph, from Christmas until today. His face has changed so much.

Michael was near Southside just before noon, so he brought Benji lunch and checked in with Mrs. Smith. We have been talking a lot about how Benji’s re-acclimation to school is affecting him emotionally. Michael noticed some younger kids staring at Benji, and he decided to take matters into his own hands. He stared back at them and said, in his boisterous, jovial voice, “No! You can’t have any of my food!” which made Benji laugh, which made the kids laugh, which is just awesome, I think.

I picked Banyan up from middle school early today for his routine (yet slightly overdue) dental appointment. I was so happy to get this done. Two nights ago, Banyan had a rare headache, and for the first time in a long time I snuggled up with him in bed instead of Benjamin. I massaged my firstborn’s temples with oils and wished his pain away. I have become fearful of neglecting Banyan’s health while I am so focused on Benji’s. I don’t want to overlook any subtle signs. I don’t expect them to be there, but I admit to being afraid of them.

At the dentist I mentioned Banyan’s tendency to get swollen tonsils, and wondered if they would soon need removal. I was relieved to hear that they were not at all infected. At his age, it is useful for them to be moderately swollen; they are acting as bacterial filters. Banyan’s teeth are pretty perfect. I watched him sprawled in the dentist’s chair, his gigantic feet hanging off the end. I remember when his three year old body occupied just half of that chair, and he had only baby teeth to brush. Now he just four left to lose.

We picked up Benjamin from Southside next, who stayed after school to work with Mrs. Smith. She told me he hadn’t seemed quiet or somber today at all; he was chatty with his friends. This was a huge relief to me. He took the same math test his peers took today and aced it. He’s getting right back up to speed.

We came home and I prepared a dinner that Benjamin specifically requested, with a fun twist–a pasta “bar” with marinara, alfredo, and pesto sauces. When Michael came home and it was time to eat, something triggered Benji’s emotions–we have no idea what it was–and he went on a full hunger strike. He has initiated these strikes before, but negotiated compromises before the meals have ended. Tonight, though we insisted he sit with us at the table, he didn’t eat a bite. Because of the timing of his oral chemotherapy we told him that his window was closing. He understood the ramifications of his actions, and he made his choice.

I felt heartbroken. I felt like his failure to eat was my failure to care for him. I still don’t know what happened. He can be so sensitive, and food has been such a strangely fluctuating commodity in his world. It has changing value. Michael and I had a private meeting after dinner, and vowed to remain calm, empathetic and loving; we knew we could not feed him, and we knew it would be hard. Of course Benji was hungry during his two hour wait, and he fell asleep tonight after several tummy clutches. There are times when his emotions overload him and his words fail him. But but holding food hostage cannot be the answer.

Tomorrow is a new day, one that will find Benjamin and me driving over the Skyway as the sun rises. He’ll be getting his second dose of Pentamidine, a monthly inhaled antibiotic that is temporarily replacing the oral variety that more greatly suppresses counts. We will also be checking his Methotrexate and creatinine levels. He will be at school by lunchtime.

As the day ends, I am relieved of its intensity and I am appreciating it at the same time. It is responsible for this big love I am feeling. These boys push me against the ropes sometimes, but they break my heart wide open, again and again.