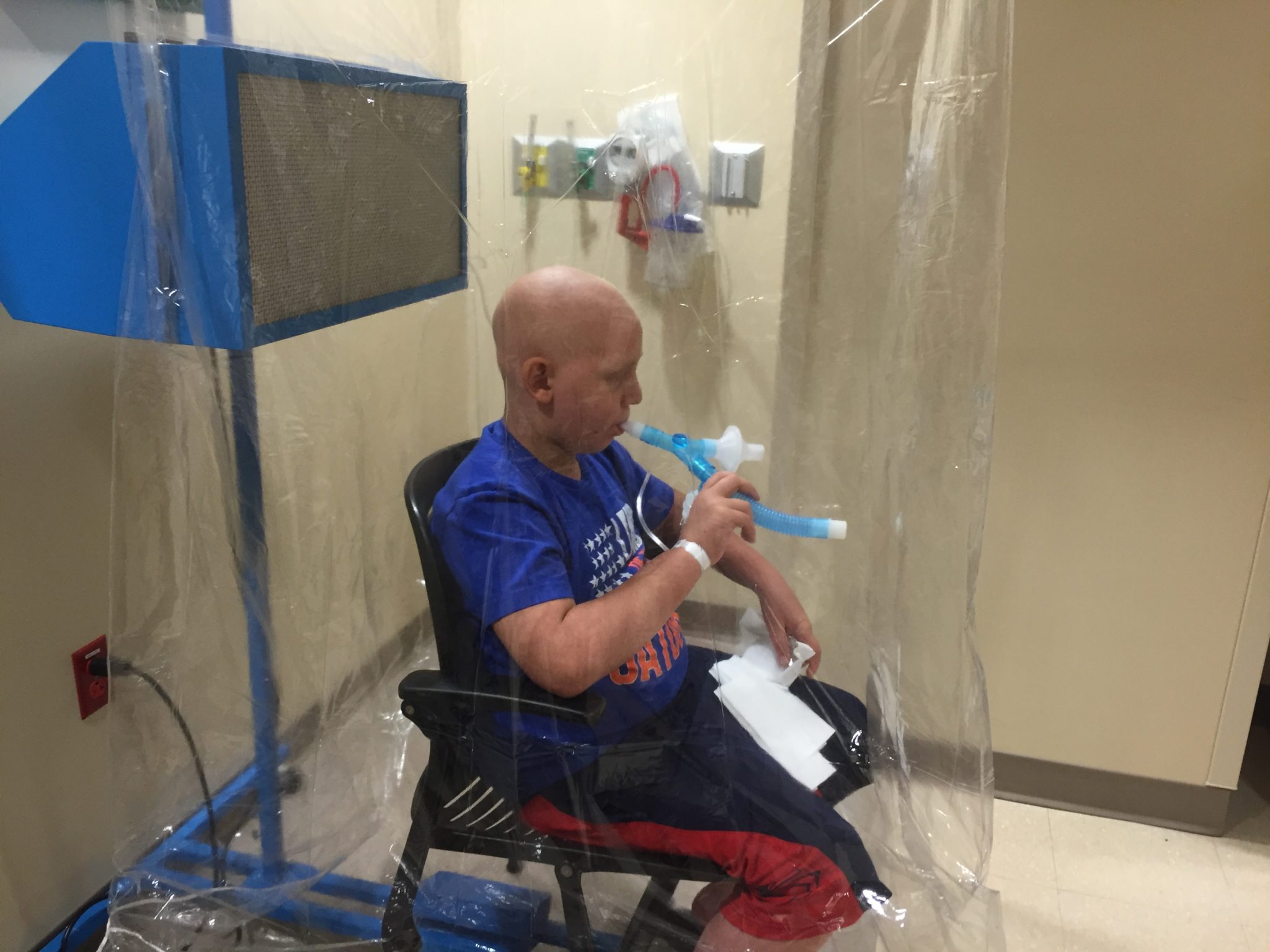 Benji woke up in much better spirits today. He had made his own breakfast by the time I returned from my sunrise bridge walk, and greeted me happily. Banyan got ready for school and we dropped him at the bus stop, then headed over the Skyway for the first time in nine days. The vibe was light and cheerful in my car. We were singing with the windows down. I left my Binder at home for the first time ever, and I did it on purpose. I just didn’t feel like we needed it today.

Our appointment today was in the Pulmonary Function part of the All Children’s Outpatient Care Center, so that Benji could receive the inhaled version of Pentamidine. It’s a pneumonal antibiotic that has temporarily replaced his Septra, because Septra suppresses blood counts, and he’s still recovering from prolonged neutropenia. Before our appointment we stopped by our usual Hematology / Oncology Clinic (which everyone at All Children’s calls “Hem-Onc” for short, but without pronouncing the ‘n’, so it sounds like “Heemawk”). We wanted to sneak in a finger poke (well, I did) so that Benji’s creatinine and Methotrexate levels could be tested and we can see how his body is tolerating the oral version of the medicine that wrecked him last month.

I should truly video Benjamin getting a finger poke one of these days. It is simply no big deal anymore. No flinch, hardly a blink. He is involved with the process and watches the drops of his blood go into the vial. Maybe if he were still on the seventh floor, a finger poke wouldn’t feel easy. But today it did.

We left the third floor and went down to the second and registered with the Pulmonary Function folks. Benji did his morning homework while we waited. A kind nurse called us back, and we were taken to a small room with a strange cellophane enclosure inside. Benji was instructed to sit in the bubble and hold an apparatus that looked like a nebulizer. It was attached to a vial of liquid. When the nurse turned on the apparatus, Benji was to inhale, and continue breathing normally through the thing–for twenty minutes. Huh? No one told us that part. This was supposed to be an easier, less invasive method than his intravenous Pentamidine. I am grateful that he didn’t have to get accessed, and I’m sure in hindsight, so is he. But at the time, twenty minutes felt like an eternity.

We passed the time by watching old game shows on the small television in the room. Every minute or so, Benji would have to take the contraption out of his mouth, spit into a bucket, and I would wipe his face. He asked for breaks two or three times where the nurse would turn off the machine and he’d take some time to collect himself. He didn’t like the taste, the feeling, the noise. But like he has done with so many other totally unpleasant new experiences, the kid just pushed on through like a workhorse, and finished the medicine before twenty minutes was up. Rock. Star. We made it home just before Benji’s lunch break at school. He changed into his uniform, grabbed his lunchbox, and joined his friends in the cafeteria like it was any other Thursday.

I enjoyed a much needed haircut with my talented stylist friend this afternoon, and an annual pedicure with my sister-in-law tonight to celebrate each other’s birthday. These experiences both felt a little surreal but I admit it feels nice to be surrounded by beauty and take care of myself. The boys were happy to be with Michael, sharing sandwiches and watching Banyan’s first basketball practice with a new team.

As I was putting Benji to bed tonight he was complaining of a sore throat. Michael said it had started while they were out. He has no fever and no other symptoms. I gave him a hot bath with oils and salts. With the help of Banyan’s excellent example, I coerced him into gargling apple cider vinegar. I hope he feels better in the morning. We are planning to leave super early to head over the Skyway. If all is well, instead of going to the hospital, we’ll drive to a news station. I am nervous to speak about these last ten months; it’s much easier to write about it. I’ll take my lead from Benji and push through the hard stuff. We were invited because kids like Benji need blood transfusions. He’s had nineteen of them. If a handful of people see the newscast and see my boy and feel compelled to give of themselves, then we will have done a very good thing.