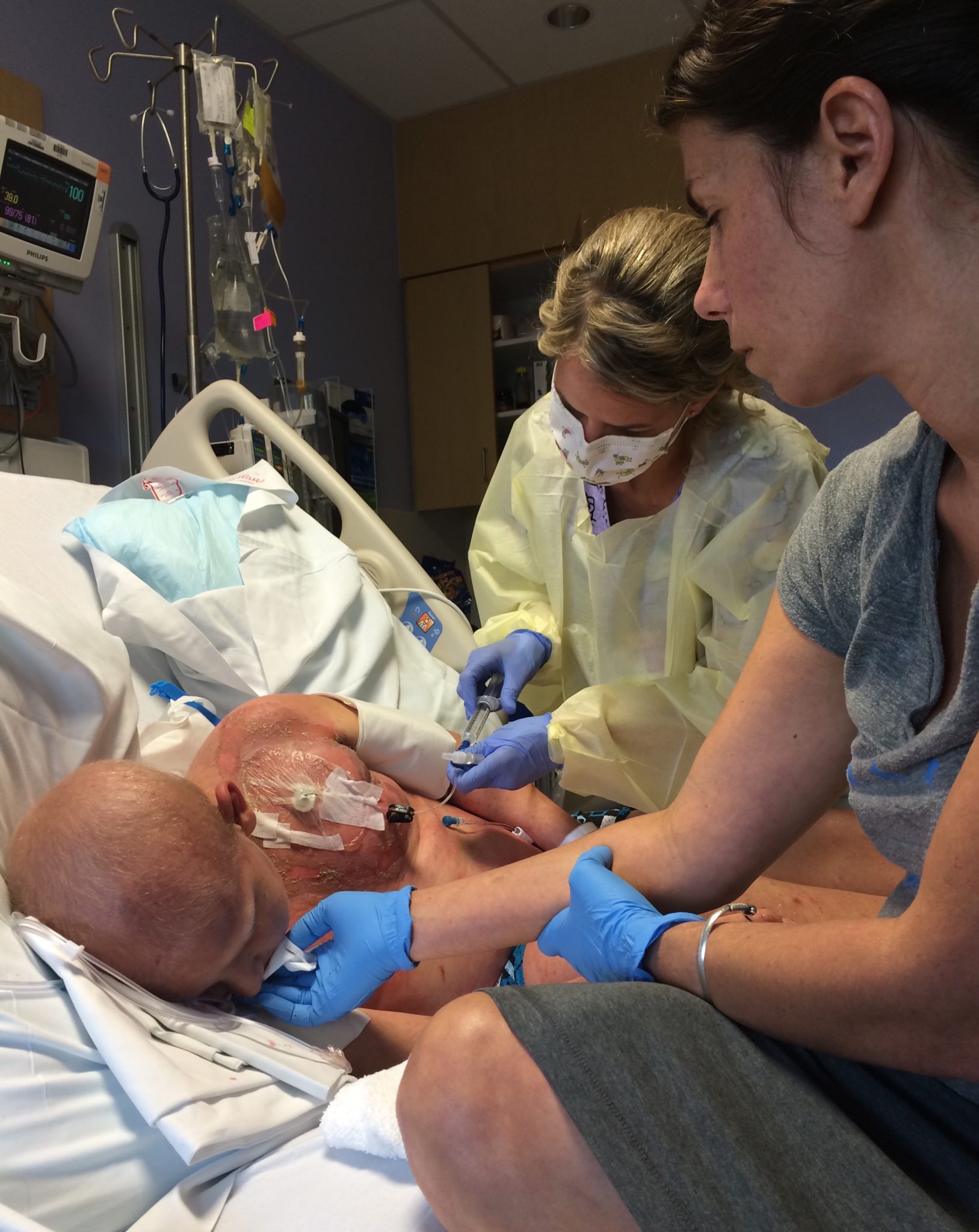 I’m not sure how to begin writing this. So many emotions wrapped up into one October Saturday. There have been many hard days, especially the most recent ones, but I think today may have been the hardest. In addition to witnessing Benji’s pain and managing my own fear and exhaustion, today, I felt anger. Today, I lost a measure of confidence in Benji’s care. A door of doubt I’ve kept tightly shut has been opened.

The day began with some positive signs. We all got a little more sleep. Benji’s rash looked better this morning than it did last night, true to the pattern we have seen developing. Aunt Sarah went out into the world again and purchased three milkshakes for Benji to try. We are still earnest in our efforts to find something that soothes him and provides a little bit of nourishment.

Benji was shaky this morning, and we saw his eyes roll back a few more times. We know it’s because he’s in pain. His abilities to meditate are so innate. He can be totally present, answering questions with a nod or the raising of a finger, while he disappears into his own head to find peace. He zenned himself into sleep while Sarah was gone.

When Benji woke up, Aunt Sarah was back, and we laid out before him his requested shakes, coca-cola, spoons, bowls and straws. Benji enjoyed playing kitchen chemist, and by encouraging him to mix various concoctions, we got him to take down about four ounces of milkshake. A small victory.

Michael and Banyan arrived a little while later. I watched Banyan’s face as he took in his little brother’s condition. I can’t really describe it. Surprise, confusion, concern, the desire to say and do the right thing. He’s so good, that one. I miss him. It was nice to have him in the room.

I had heard that Dr. Oshrine was on the seventh floor today taking care of bone marrow transplant patients. When he donned a mask and walked through our door this afternoon, I was surprised by the level of my gratitude. He wasn’t coming in as our attending doctor. He was our friend. He said with sincerity that he was sorry Benji was going through this, especially right before maintenance. I could see in his eyes above the mask that he was truly saddened. Michael and I gave him the overview of the past nine days, and we asked him if he agreed with the other oncologists’ reigning viral theory. He was careful to say that the oncologists assessed things as a team, but to him, Benji’s symptoms aligned perfectly with Methotrexate toxicity.

I felt like I’d been punched in the gut. Michael and I started tracing everything back, from the stomach pains Benji was having after his “Day 11” Methotrexate, to the rash that was assumed to be cellulitis, to the “Day 21” dose last Thursday and the series of events that have unfolded since. Sarah and I were both researching furiously. Every symptom matched up. It started to become very clear that this is no virus Benji is fighting. It’s poison.

Kathy arrived as we were processing this information. She stayed in the room with the boys while Michael, Sarah and I went to find the ARNP. We told her about this new theory, and how the pieces all seemed to fall into place. She actually rolled her eyes when we told her that Dr. Oshrine mentioned the possibility. We all but insisted that she order a Methotrexate level to be added to Benji’s next blood draw.

While we waited for the results to come back, the nurses were preparing for Benji’s weekly dressing change and re-accessing. There was much discussion about how best to tackle this task, as the skin around Benji’s port is so terribly irritated. We decided to abstain from using any adhesive removers, or any cleaners with harsh chemicals, instead soaking the perimeter of the dressing in sterile saline and preparing to clean the area with betadine. A different kind of dressing was planned for the reaccess, one that would not adhere directly to Benji’s skin.

Our sweet nurses started the process of peeling back Benji’s dressing, and it became apparent quickly that it could not be done without sacrificing some of his skin. In addition to being painful, this would also place him at higher risk for bacterial infection; but so would a central line that stays accessed for too long, with blisters forming at the periphery. It was a tough call: wait for potential healing, or move ahead with the delicate procedure.

Benji made the decision for us. While we were waiting for the nurses to consult with the IV and skin teams, Benji woke up and started spitting blood. We knew it was the ulcerated lesions in his mouth breaking open after his long sleep, but this time, the bleeding didn’t stop. Benji’s platelet level this morning was 24,000, and judging from the entire package of gauze we went through to absorb his blood, the level had dropped even further. The decision on when to reaccess Benji was shelved for the immediate need to reconnect his line and infuse platelets into his body. We had to wait until a dose of Tylenol was administered, as Benji had a high fever, which would burn up the platelets. Once the golden liquid started dripping into Benji’s line, his blood began slowly clotting again. We exhaled. Benji looked so sick while this was happening. I was grateful that Kathy had taken Banyan to his basketball game.

The nurses’ shift change was eventful. There was a lot of information to share. I saw them pull up a new window on the computer, and I asked if Benji’s midday blood draw had come back. It had. His Methotrexate level, nine days after a low dose administration, was 0.22. Dr. Oshrine was right.

With the platelets tranfused and the nurses out of the room, we all sat with this information. No one said anything for a while. I wondered how many healthy cells were being killed unnecessarily in Benji’s body. I wondered what damage this would mean for his kidneys, liver, lungs, skin. Dr. Oshrine had said that if it was in fact Methotrexate toxicity, then he would lean heavily toward discontinuing Benji’s final two doses in frontline treatment and sending him directly to long term maintenance. This evokes a whole new level of necessary trust. We must hope that Benji has gotten what he needs from the doses of Methotrexate thus far, during the days when it was therapeutic to his body, not toxic. There is no way to know.

Michael helped us get Benji into the tub and changed his sheets, then went home to join Banyan. I met with the charge nurse about potential steps moving forward. When I came back in, Sarah and I got Benji out of the bath, and his back hurt. We reminded him that he has a pain button to press when he needs it. He asked if it was okay to press it then. We encouraged him to, and told him he was doing the right thing. There was a lot of that kind of encouragement today.

The discussion about how to proceed with rescuing Benji’s body from this Methotrexate toxicity was unsettling. The oncologist on call said that we were in “unchartered territory.” We decided to administer the rescue drug Leucovorin, which Benji had during his first Interim Maintenance phase with high dose Methotrexate. The dosage felt like kind of a crapshoot, honestly. I was told there was very little risk, but only possible benefit. The “possible” comes into play because most of the Methotrexate has already bound with Benji’s cells. We cannot do anything to rid the body of those toxins until the cells they are bound to die off, and do not replicate. The hope is that the Leucovorin will draw the remaining Methotrexate out of Benji’s body and encourage his new healthy cells to grow.

At this point in a very long day I am relieved to be taking conscious action toward resolving a problem. The problem now has a name. This is a critical step. I am grateful for my husband and my sister, who provided sound insights during a time of so many decisions, none of which were based in protocol. I am grateful for the yellow bag of Total Parenteral Nutrition (TPN) that now hangs from Benji’s IV pole to give him strength after nine days without a meal. I am grateful for the friendship and kindness of a physician who stopped by to say hello, and in so doing, solved a mystery.

I am also angry. Sometimes, most of the time, anger is destructive. In this case, I feel that it will serve Benjamin well, and possibly those who come to this seventh floor after he walks–runs–out of here when this stay is over. I don’t like the feeling of doubt that has crept in, but it will provoke me to question and to make change. To me, and to my family, it is unconscionable that the possibility of Methotrexate toxicity wasn’t brought to the table before today. Everyone agreed it was the catalyst for Benji’s acute renal injury. But no one, until today, told us that Methotrexate could be responsible for everything we’ve seen from stomach pain to fever, from mucositis to rash, from blistering to the annihilation of Benji’s cell counts. I feel strongly that it all could have been identified much, much sooner, and spared Benji countless tests and swabs and cultures. It also could have been avoided altogether, with modifications to the protocol for this phase that include pre and post hydration and a follow up blood draw.

I am grateful for today’s enlightenment and even more grateful that it is over. Tomorrow is a day to move forward. We will be marching, not walking. Things will move quickly and appropriately for Benjamin’s highest good.