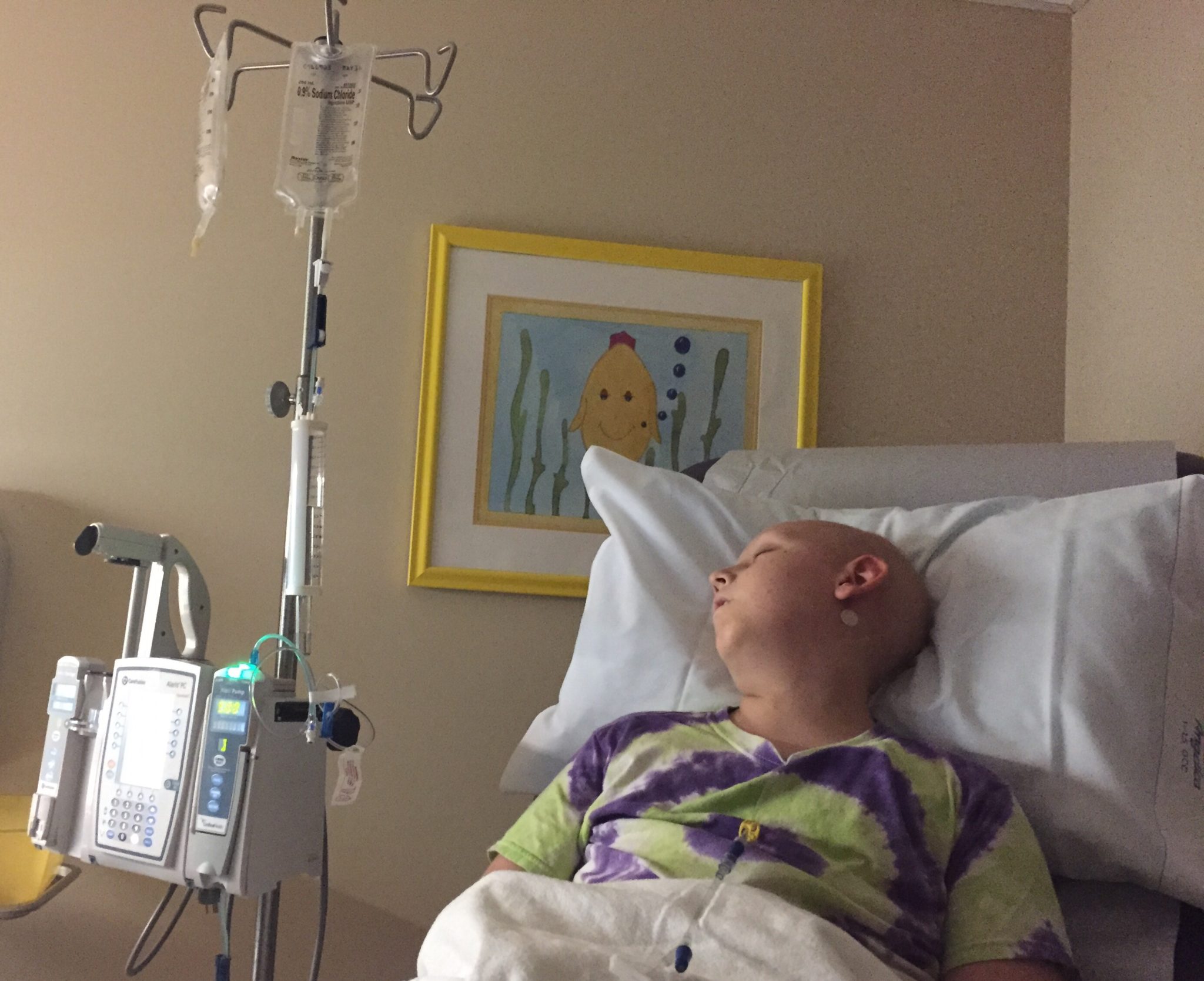 Benji’s mysterious tummy trouble culminated today. At 4:30am he woke up with pain and nausea that persisted until we arrived at the clinic. With careful timing I was able to get his trifecta of Kytril, transdermal Scopolomine and Marinol into his system. Michael was working super early this morning. I was so thankful that with a simple text message, Banyan had a ride to school; he woke up with his alarm, got completely ready, fed himself breakfast and hit the road.

Benji slept on the way over the bridge and vomited when we got to the waiting area bathroom. He also had severe diarrhea then, which so far is an isolated incident but had my brain going in many directions. When Molly the medical tech called us back, she had tears in her eyes. This was not the Benji she has come to know. His color was so wrong.

We got checked into our exam room. I dimmed the lights, got Benji a blanket and pillow and turned on some music. Benji slept until nurse Sarah came to access his port. He was super afraid he would throw up with the flushes. We used his oils, and he was doing such a great job, but his port slid and Sarah hit one of its walls with the needle instead of the center. She didn’t have to reaccess but she had to adjust until found blood return. Benji hated the feeling of all of that happening beneath his skin. “This is the worst day,” he said quietly. “We’ll get through it,” I said again and again. He nodded.

Sarah left with enough blood to run counts, chemistries and cultures. I dimmed the lights again when she left, and Benji rested until Dr. Hale came in. As I was describing Benji’s symptoms, Sarah brought in his CBC results. His white blood cell count and absolute neutrophil count (ANC) were both super inflated, higher than I’ve ever seen them. This points strongly to an infection.

Dr. Hale and I seemed to be very much on the same page today. I requested IV fluids, he already had them ordered. I told him I was concerned about today’s scheduled Methotrexate, as it was sure to exacerbate Benji’s nausea; he said he’d put a hold on the chemo for today. We got the results of Benji’s blood chemistry during our conversation as well, and they were a nice relief. His liver, kidney and pancreas enzyme numbers have gone down. His inflammation numbers were also on the low side. With those results and a brief physical examination Dr. Hale could easily eliminate the biggest concern of this phase, pancreatitis. What is much more likely is that Benji is fighting a gut bacterial infection or a simple tummy virus he caught at school, or at the Gator game, or who knows where. This latter scenario is my hope.

Benji slept through most of my conversation with his doctor, and Sarah the ninja nurse hooked up his first bag of IV fluids without waking him. So when he woke a while later connected to an IV tube he was confused, and had a moment of panic. “What is that?!” I told him it was only fluids, and that he wasn’t getting any chemo today. He looked so hopeful, but wanted to be sure: “I’m not getting the yellow medicine?” I shook my head no. He let out a “Yes!!” of relief that broke my heart completely. His voice shook with the honesty of his relief. An Appalachian Amazing Grace played softly from my phone.

Over the next few hours Benji would get a saline bolus, more fluids with dextrose, and a super strong 24 hour antibiotic. We caught a pee sample and sent it to the lab. It came back clear. I have all of the necessary equipment to catch a stool sample here before our clinic visit tomorrow, should one present itself.

Benji spiked a 101.6 fever right at the end of his hydration. Sarah took a complete set of vitals and consulted with Dr. Hale. Because Benji had already gotten the antibiotic, he is protected for 24 hours, and Dr. Hale decided to send us home rather than admit him. I was grateful. No further action could have been taken on the 7th floor until Benji’s blood cultures come back, which won’t happen before our appointment tomorrow anyway. I can keep him hydrated and much more comfortable here.

We made it home free of incident. Benji slept most of the way. I gave him more Marinol. It’s my ace in the hole. A little later, he felt burning during urination that totally baffled me. He’d had so many fluids, his urine came back clear and his creatinine was low. I called the clinic and spoke to a doctor I’ve never met. She said that it could just be the antibiotic concentrating in his bladder. A bladder infection or kidney stones would have shown signs in his urine culture, most likely. If it doesn’t subside, I will request an ultrasound tomorrow.

We settled into bed. I fell asleep right along with him. I was sad that I couldn’t be at Banyan’s middle school open house, but I wasn’t about to leave Benji. Michael was happy to go, and Banyan was completely understanding and I think a little proud to show his daddy around campus. I was so relieved to see them when they came home, with prescriptions and dinner in hand.

I have felt this tension building right here at the end of frontline treatment, and the hope that comes along with it. There is a lesson here to return to the moment, no matter how close things in the future may appear. We are still being held in so much love. Two people offered to bring us meals tonight. Another dropped off a care package. Family offered help in all manner of ways. The thoughts and prayers have not stopped, and we are so grateful.

I hope to get more clarity tomorrow. I will take solace in the things I do know: Benjamin’s immune system is working overtime to fight this, whatever it is. His pancreas and liver are not inflamed. So far all numbers look good. He is getting what he needs and his pain and nausea are currently being managed. He is sleeping soundly in our bed. This too shall pass, and we will move forward.