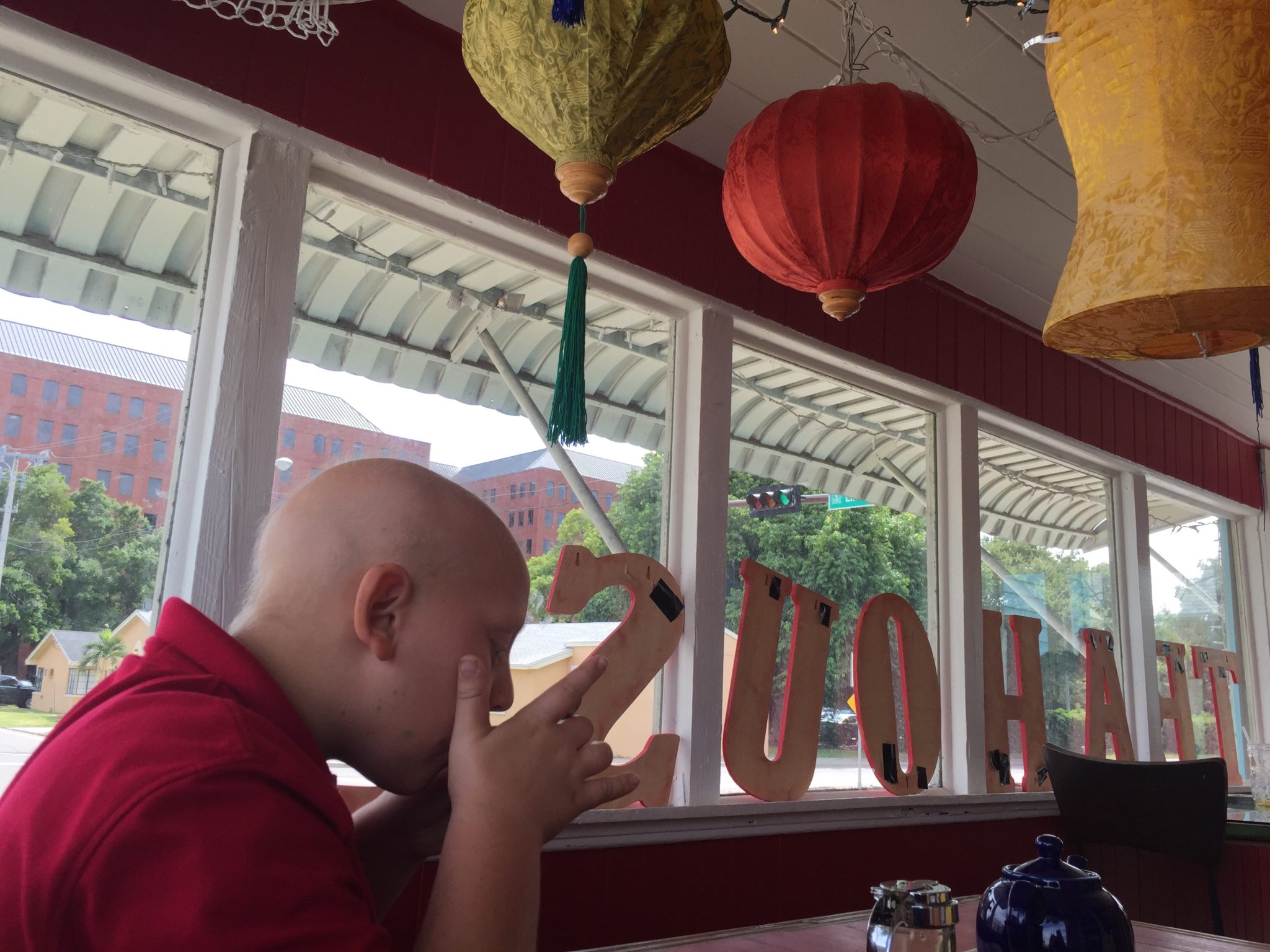 Benji had the sniffles this morning, and a little bit of a cough. Sometimes these symptoms happen after withstanding long stretches of chemo. He could also be fighting back to school germs, but he hasn’t had a fever, so I was confident he wasn’t contagious. He was bouncing off the walls wanting to go to school. So to school, he went.

Michael took Banyan to middle school, and I stayed home in case Benji started feeling worse as the day went on. I worked for a little while, but found myself feeling fragmented. I learned last night that a friend of Benji’s from the clinic was given an extremely poor prognosis. He’s the very first kid we saw in clinic, the one who rode his scooter through the halls with the giant smile on his face. He’s also the one who threw out the first pitch at Tuesday’s Rays game. Over the summer, he and Benji were in the Infusion Center together several times. His mother made an impression on me right from the start. She is ebullient in her positivity.

Since I read about the reality this family is now facing, and about their decision to end chemotherapy and fill the next weeks with as many adventures as possible, I have been able to think of little else. I can’t talk about it. I haven’t even told Michael, though he’ll have read it here. I won’t tell Benji, not now. I’m so grateful for this space.

The little boy is just four. He was diagnosed with a different kind of cancer than Benji, a neuroblastoma, at sixteen months. I have never seen him without a smile on his face. I have thought of his fierce mother all day. I was afraid, early in Benji’s outpatient days, to make friends. Statistically I knew this kind of news was a possibility, and I didn’t know if I would be capable of hearing it. But I’m grateful for the example this mother is showing me. She has flown all over the country with her boy. Many doctors and hospitals have done everything they possibly can. Now it’s her turn to fill his days with a lifetime of happiness and wonder. My heart is with her, and it is so heavy. But I am in awe.

I took a work break and burned some sage in the house, turned on some music, and cleaned for a couple of hours while the rain fell outside. It felt good. Gratitude was my mantra with every movement.

I was giddy to see Benji when he walked down the stairs from class. He looked so happy. I noticed right away that his color was off. I remembered feeling the same way Tuesday; it could be his hemoglobin, or it could be that I am now seeing him in contrast with 700 kids who don’t have leukemia.

We had made arrangements for Banyan to walk to the office after school and come home with Michael, so Benji and I found ourselves with an extra hour together. I took him out for a tea date. We had an absolutely lovely time.

As the night progressed, Benji grew more and more emotional. Little things were upsetting him at dinner, and his tummy hurt badly during bedtime stories. There were lots of tears and deep breaths. It’s been a big week. He’s handling so many big feelings.

Tomorrow, Banyan will ride the bus to school with his friends, and Benji and I will head over the Skyway for his Erwinia shots. It’ll be his final dose of chemo of this Delayed Intensification phase. Interim Maintenance 2, another intense phase, begins Monday (counts permitting). After a long week of treatment, work, and the new school year, we will all be most grateful for the respite of this weekend. I plan to fill it with happiness.