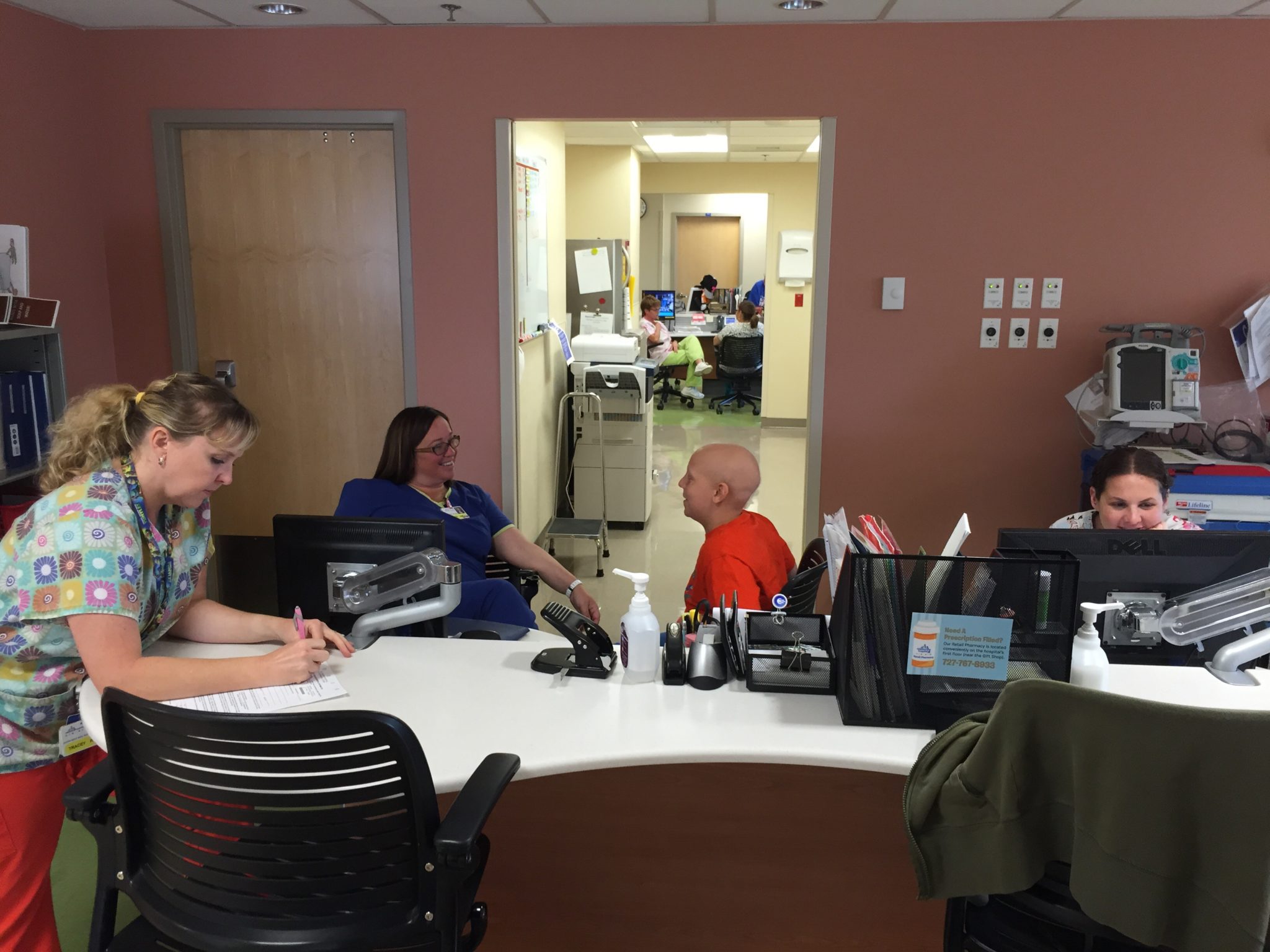 After last night’s baseball game, we were all sleepwalking as we left the house bright and early this morning, Michael and Banyan for work and school, and Benji and me for his appointment at the All Children’s Outpatient Infusion Center. I poured a double shot of espresso in my coffee, put numbing cream over Benji’s port, and we hit the road.

We parked in our usual spot on the fourth floor of the parking garage. By the time we arrived at the elevator doors, Benji had tears in his eyes. Monday’s shots had hurt him badly, and he was worried. First, he had to have his port accessed and his blood drawn to be sure his platelet levels were adequate to withstand the punctures. I knew they would be, but I’m always grateful to see where Benji’s numbers are. I didn’t forget the oils today. Benji didn’t regret his decision to be deaccessed Monday, even with today’s extra poke. I think such a big decision resting on his shoulders–and working out well for him–feels empowering.

Benjamin’s platelets and hemoglobin both dropped just slightly. His absolute neutrophil count (ANC), which had been on the rise, has dropped again to 204, just above the profoundly neutropenic mark. The drop doesn’t surprise me too much; at the end of Consolidation, Benji’s ANC stayed low enough to cause a delay. I’m hopeful it will rise again quickly, both to help him fight potential infection and to begin Interim Maintenance 2 on time. If he gets delayed, of course it’s no big deal–we’ll enjoy the break. But we have long term maintenance well within our sights now. We’d like to get there sooner rather than later.

With Benji cleared for chemo, Tracey and Jacqueline, his two favorite nurses, prepared his Erwinia shots. He grew nervous. He stalled, almost to the point of rudeness. They were forgiving. He was so tense, I was worried; relaxed muscle is much more giving and causes far less pain. Breathe. Breathe. You are stronger than the pain. I saw his entire face relax, and the nurses did too. They took the opportunity. Relief came over Benji. It was painful, but he had overcome it. It was nothing like Monday. We took our laps happily, then he took a seat behind the nurses’ station, cracking jokes and making them laugh; a Benji style apology for keeping them waiting.

Benji chose to be deaccessed again after his hour of monitoring, and we came home. He wasn’t feeling well in the car. His tummy hurt and he felt tired. We opted not to push it and he stayed home for the end of the school day. He would only have been able to go for two hours anyway. He looks forward to a full day tomorrow.

Regardless of what happens with Benji’s ANC, he will have his final shots of Delayed Intensification on Friday. He has many more to endure in September, but we will be so happy to have this phase behind us.